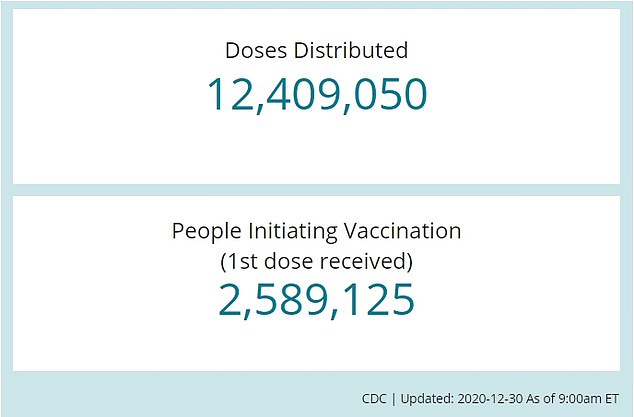 The US has only administered about 10 percent – less than 2.6million – of the 20 million doses of coronavirus vaccine it promised to give to Americans by the end of 2020, despite having distributed more than 12million doses to states and territories.

CDC data reveal that as of 9am ET on Wednesday, fewer than 2.6million people had received their first doses of Moderna or Pfizer’s vaccines – both of which are difficult to ship and handle.

The bottleneck is caused by officials on state and federal level who have failed to create plans to get those shots into the arms of Americans according to a former FDA official who told DailyMail.com that the failure is akin to dropping the baton on the last leg of of the vaccine race.

While Americans continue to wait to be vaccinated, the UK on Wednesday authorized a vaccine by AstraZeneca that will almost certainly accelerate vaccine distribution there because it is cheaper, far easier to ship, handle and store than the Pfizer and Moderna alternatives.

Yet US regulators have no intention of approving the more efficient shot until April – two months after AstraZeneca’s US trial will have enough data to prove to the FDA that it works. Other trials have already shown that AstraZeneca’s $4 vaccine is safe and about 70 percent effective – well above the efficacy the FDA said it will require to approve a vaccine.

But in the US, federal government has punted distribution plans almost entirely to states, where health departments are already stretched thin by surging COVID-19 cases. The result is a helter-skelter patchwork of last minute plans that look vastly different from state to state, bumping drug addicts and prisoners to the front of the line in some places, while in others elderly Americans are camping out in lawn chairs overnight in a bid to get vaccinated. Others say essential workers and the aged are being told to ‘call around’ to see if they can get a vaccine.

Even Operation Warp Speed’s chief scientist Dr Moncef Slaoui said on Wednesday that the US vaccine roll-out ‘should be better’ as anger mounts that fewer only about 230,000 Americans are getting vaccinated a day.

As of Wednesday morning, the US had distributed 12.4 million doses of vaccine and given out fewer than 2.6 million, according to CDC data updated Wednesday evening

‘We agreed that the number is lower than what we hoped for,’ said co-chief of Operation Warp Speed Dr Moncef Slaoui during a Wednesday briefing.

WHAT’S THE HOLD UP WITH THE US VACCINE ROLL-OUT?

More than 12 million doses of coronavirus vaccines have been shipped to US states and territories.

But fewer than 2.6 million vaccines have been given to Americans.

A former FDA official, Peter Pitts says the US has dropped the baton on the final leg of the vaccine relay race.

Shots were developed, manufactured and sent to states in record time.

But the federal government did not create a national plan for where states should give out shots, or to whom these shots should go first.

States were instructed to make their own plans – which is fairly typical, with a generalized set of national recommendations for vaccines against flu or measles, and programs made specifically by states.

But now, millions of doses are stuck.

They have been delivered at the state level, but there is an apparent bottleneck between getting them from receiving facilities to clinics and into people’s arms.

‘We know that it should be better and we are working hard to make it better,’ he added, of the distribution process.

But that has not translated to shots in arms.

The vaccine rollout in the US lags behind other wealthy nations. In the 16 days since the U.S. began vaccinating people, 2,589,125 Americans have gotten their first dose.

That means an average of about 40 out of every 100,000 people in the US are getting vaccinated a day, compared to 60 per capita in the UK, which approved the Oxford University-developed vaccine made by AstraZeneca on Wednesday.

Dr Slaoui said that vaccine – which is more easily distributed because it can be shipped and stored at refrigerator temperatures – likely won’t be authorized until April.

US regulators have faced broad criticism – including from President Trump – for dragging their feet on vaccine approvals while thousands of Americans die of COVID-19 each day.

It seems that the harsh words have done little to hurry the Food and Drug Administration (FDA) up.

AstraZeneca expects to have results from its ongoing US vaccine trial by February – yet Operation Warp Speed says it doesn’t expect the shot to get authorized for another two months thereafter.

It remains unclear why. The vaccine was at least 70 percent effective in trials. Data published in the Lancet gave rise to no major concerns over side effects or safety (despite trials being paused in September after two participants developed neurological issues, both of which were ultimately deemed unrelated to the jab). 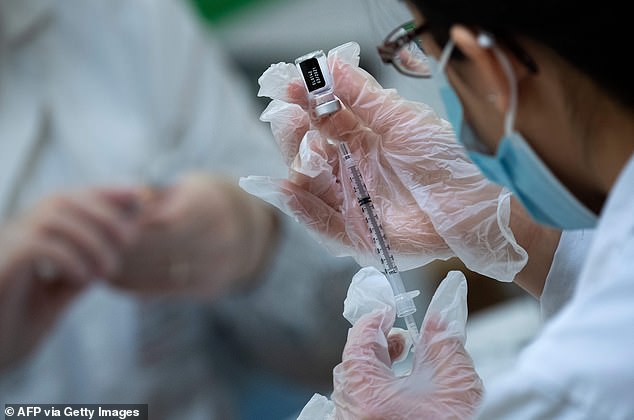 The US has vaccinated fewer than 2.6 million Americans as of Wednesday morning, updated CDC figures showed that evening

It remains unclear why. The vaccine was at least 70 percent effective in trials. Data published in the Lancet gave rise to no major concerns over side effects or safety (despite trials being paused in September after two participants developed neurological issues, both of which were ultimately deemed unrelated to the jab).

With the approval of the Oxford/AstraZeneca shot, British officials hope to bump vaccinations up to two million a week – nearly as many as the US has administered in over two weeks.

AstraZeneca’s vaccine is cheaper and easier to ship than the Pfizer or Moderna shots that have received emergency use authorization in the US.

While Pfizer’s shot must be kept at ultracold temperatures and Moderna’s must be shipped and stored frozen, AstraZeneca’s could be sent across the world in regular refrigeration, which could be a major boon to faster distribution.

And distribution is moving painfully slowly in the U.S. Delays are literally deadly, with the US hitting a record high of more than 3,700 deaths on Tuesday. Having enough doses, or even getting those doses to states, however, doesn’t seem to be the heart of the issue in the American rollout of vaccines.

‘The problem with the rollout isn’t due to a lack of product – that’s at least a little piece of good news,’ Peter Pitts, a former FDA official told DailyMail.com.

In record time, scientists managed to develop vaccines, the FDA managed to approve two of them – although not fast enough, arguably – companies managed to ramp up production of millions of doses of vaccines and ship them across the country.

Texas is doing literally nothing to give Texans the vaccine. You are telling the elderly and the essential workers to call around and see if they can get one. We have 650 beds left in ICU but, sure, do nothing. https://t.co/lrN4RmKNin And now some nine million doses are waiting to be administered.

CDC’s latest figures show that more than 12.4 million doses have been shipped to US states and territories since Pfizer’s vaccine became the first to get emergency FDA approval on December 11. That includes 959,875 that were shipped in the past two days.

Notably, the CDC’s public data documents only the number of vaccine doses that were shipped – not how many have arrived at their destinations.

While testing czar Admiral Brett Giroir assured Americans this week that the official tally of shots in arms is an underestimate, Dr Slaoui confirmed that the U.S. is nowhere near having 20 million people vaccinated.

The problem, it seems, is happening sometime between shipments of vaccine going out, and health care workers injecting them into people’s arms.

‘The frustration is that the logistics of getting people vaccinated is getting done at the last minute, which is shameful,’ Pitts said.

‘This is a state level proposition [and]…you have 50 different plans all in different stages of development. Nobody took responsibility to develop the plans, and that’s just shameful.’

President-elect Joe Biden criticized the Trump administration Tuesday for the pace of distributing COVID-19 vaccines and predicted that ‘things will get worse before they get better’ when it comes to the pandemic.

‘We need to be honest  – the next few weeks and months are going to be very tough, very tough for our nation. Maybe the toughest during this entire pandemic,’ Biden said during remarks in Wilmington, Delaware on Tuesday.

Biden also went after the Trump administration over its vaccination efforts, warning that the project, dubbed Operation Warp Speed, is moving at a slower pace than needed.

‘As I long feared and warned the effort to distribute and administer the vaccine is not progressing as it should,’ he said.

But Pitts says that political finger-pointing is as useless as it is common.

He says there has been a lot of ‘finger-pointing and blame-placing rather than accepting that these are problems that need to be solved collectively.’