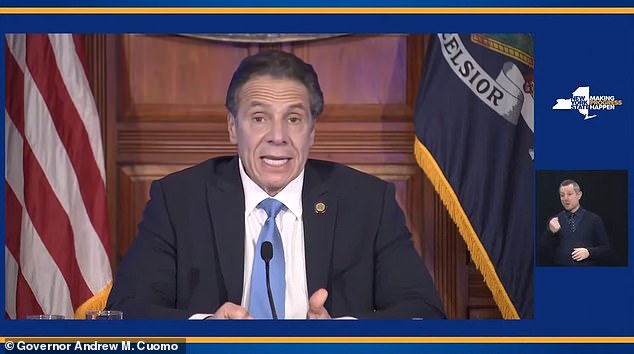 The rollout of the coronavirus vaccine in New York which has been explained by the state’s governor Andrew Cuomo has been criticized as a ‘woke-left, centralized approach’ that is dangerous to the American people.

The comment was made by the publisher of a politically conservative online magazine, The Federalist’s Ben Domenech, who is unhappy at the priority the elderly are being given in receiving the vaccine.

Currently, after those in urgent care along with doctors and nurses administering the COVID-19 vaccines, shots are to be given to the residents of drug rehabilitation centers, ahead of the state’s elderly population. 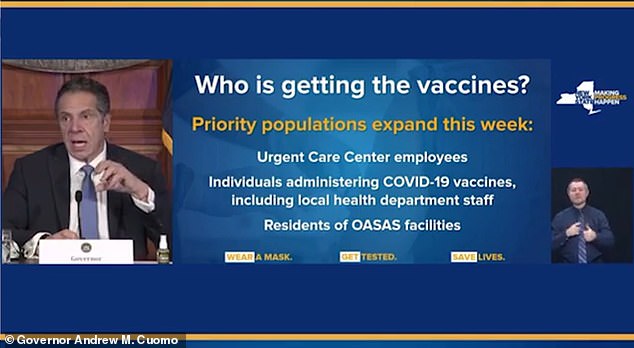 During Cuomo’s press briefing on Monday, the governor said that shots would be given to ‘priority populations’ and that when more vaccines become available the populations will be expanded and that residents of ‘OASAS’ — the state Office of Addiction Services and Supports would be next in line to receive the jab.

The agency runs 12 treatment centers across the state, with five of them based in New York Cit as well certifying and monitoring ‘hundreds’ of other private facilities. The Federalist’s Ben Domenech, the publisher of a conservative online magazine has criticized as Cuomo’s plan as a ‘woke-left, centralized approach’ dangerous to the American people The proposals have angered some including Domenech.

‘About a month ago, Gov. Cuomo was out there saying that he is going to sue to have control of the vaccine process when it came to a potential feud with the Trump administration.

‘Now that he is given control of it, he is making already the same kind of decisions that we come to expect from him, full of bluster, full of stupidity, and without any kind of thought for the elderly citizens of New York State,’ Domenech told Fox News.

‘Imagine a system in which that aforementioned woke left was determining which people should receive a vaccine based on equity. According, not to the medical needs, the health care needs of the people in the moment, but according to their own hierarchy of who would get it first,’ he said. Rep. Elise Stefanik, R-N.Y., also slammed Cuomo in a tweet earlier this week proclaiming him to be the ‘Worst Governor in America’ for prioritizing vaccines for drug addicts over seniors 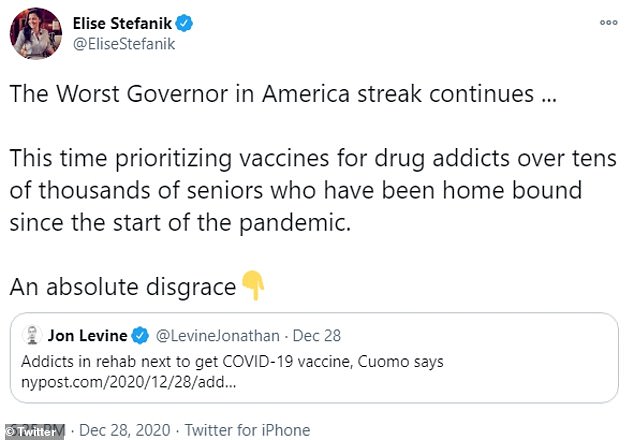 New York State is expected to receive a 259,000 doses of the Pfizer/BioNTech and Moderna vaccines this week.

Rep. Elise Stefanik, R-N.Y., also slammed Cuomo in a tweet earlier this week proclaiming him to be the ‘Worst Governor in America’ for prioritizing vaccines for drug addicts over seniors.

‘The Worst Governor in America streak continues … This time prioritizing vaccines for drug addicts over tens of thousands of seniors who have been home bound since the start of the pandemic. An absolute disgrace,’ Stefanik tweeted.

Regarding Cuomo’s plan for distributing the vaccine, Americans are witnessing the ‘dangers of a centralized approach,’

Domenech said that Americans are witnessing the ‘dangers of a centralized approach’ when it comes to distributing the vaccine. ‘Frankly, I don’t know what that would look like … I do think that it is one of those situations where you see the danger here of how these woke policies actually have an impact on people,’ he said.

‘It’s not just op-eds and people writing stupid things in the New York Times. It’s now actually being implemented as policy, and, implemented, I believe, in a dangerous and backward-looking way. We should prioritize the people who are at the most risk and, from my perspective, addicts are on that list, but, they are not the people we should be prioritizing at the moment. It should be elderly across the state.’

Nasta, CEO of the Camelot Family Foundation which operated two residential treatment centers on Staten Island agreed that it made most sense to ensure drug users receive the shot early because they were most likely ‘to get the disease and spread it.’

‘We were overlooked initially. We got the governor’s office’s attention and Gov. Cuomo acted appropriately,’ he said to the New York Post.

The Office of Addiction Services and Supports said drug users were being stigmatized.

‘Unfortunately, there continues to be a stigma against those in recovery when it comes to equal access to health care. These individuals deserve the same access to medical care as everyone else, and those at high risk of COVID should be vaccinated in line with other high-risk populations.’

A Cuomo spokesperson has insisted that nursing home residents are still being prioritized and will be receiving the vaccine.