Anil Kapoor was in his element as he came as a guest on The Kapil Sharma Show. He danced with Krushna Abhishek and Bharti Singh on his popular songs and even cracked a few jokes at his own expense.

In a promo shared online by Sony TV, host Kapil Sharma asked Anil, “Sir, ek afwa yeh hai ki aapne Abhishek Bachchan ke saath dosti sirf isliye kar rakhi hai taaki woh aapko andar ki khabar de ki Bachchan saab yeh film nahi kar paa rahe hai aur aap uss producer ko phone karke bol de ki yeh mujhe de do (there is a rumour that you are friends with Abhishek only so that he can give you inside information about the films that Amitabh is unable to do and you can then call the producer and ask him to give it to you).”

Anil was recently seen in AK vs AK, which also starred Anurag Kashyap. The two played exaggerated versions of themselves in the film – Anurag plays a disgraced filmmaker who kidnaps Anil’s daughter, Sonam Kapoor, and films his search for her in real time.

Talking to Hindustan Times, Anil said that he put his entire career and image at stake when he took up the film. He said, “If you (Vikramaditya Motwane) weren’t directing I would have never said yes. That’s your instinct, the choices you make. I’ve seen Vikram’s work in the past, and I knew that I’m in safe hands. So when you take these kind of chances and put your entire career at stake, and your entire image at stake, which you have built, no matter what happens, no matter how liberated (you feel), no matter how broad-minded you are…” 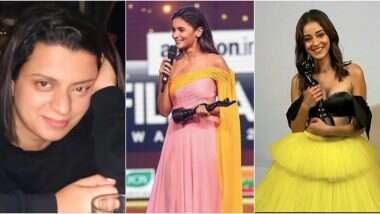 No award to Kangana doesn’t go too well with Rangoli; Aliya, Karan and Ananya again in her wrath radar

Coolie No 1 actor Shikha Talsania defends film against negative reviews, says viewers can choose what they want to watch

Abhishek Bachchan hits back at troll who said he’s a ‘product of nepotism’, calls him ‘ill-informed, immature, naive’