The cast members of The Kapil Sharma Show cannot help but take a dig at the Krushna Abhishek and Govinda’s spat. In the latest episode as Varun Dhawan, Sara Ali Khan and rest of the Coolie No 1 team came calling, it was the turn of Kiku Sharda to take a jibe at Krushna.

While Kiku and Krushna came dressed as Dharmendra and Sunny Deol’s famous characters from Dharam Veer and Jeet, they riffed on the two actor’s personas. As Krushna chided Kiku for something he said as part of his sketch, he said, “Chee chee aisi baat nahi karte (Don’t talk like this).” To this, Kiku replied, “Chi Chi to aapse baat nahi karte (Govinda doesn’t even talk to you).” Chi Chi is how many in Bollywood fondly call Govinda.

The jibe left Krushna red-faced as the guests could not control their laughter. The actor and his nephew Krushna have not been on good terms for the last few years. Recently, Krushna refused to perform on Kapil’s show when Govinda came there for a promotion. Krushna told Bombay Times, “I learnt about Chi Chi mama coming on the show around 10 days ago. Since Sunita mami wasn’t accompanying him, the team thought that I would have no qualms performing. However, the incident has left a bad taste in my mouth. Last year, she didn’t want me to perform in front of them, but this time, I had reservations.”

An upset Govinda retorted in a statement, “I am utterly sad to talk about this in public, but it is high time that the truth came out. I read the report about my nephew (Krushna Abhishek) not performing on a TV show as I was invited as a guest. He also spoke about our relationship. His statement had many defamatory comments and was thoughtless. I’ve frequently been at the receiving end of Krushna and Kashmera’s defamatory comments — mostly in the media and some on their shows and stage performances. I don’t understand what they are gaining from all this. My relationship with Krushna was strong since the time he was a child; my family and people from the industry have witnessed it. I feel that washing dirty linen in public is an indication of insecurity and allows outsiders to take advantage of misunderstandings in a family.” 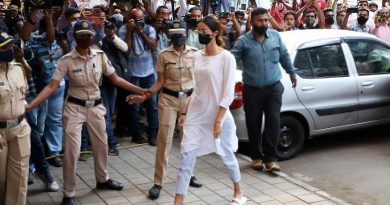 Twinkle Khanna gives a peek into son Aarav’s 18th birthday party: ‘So proud of the man you have become’