The former commissioner of the Food and Drug Administration (FDA) has said meeting Operation Warp Speed’s goal of vaccinating 20 million Americans by the end of the year is ‘unrealistic’.

It was revealed on Saturday that nearly 2 million people have been vaccinated as cases in the US surpass 19 million Sunday and more than 118,000 Americans remain hospitalized.

During an interview on CBS’s Face the Nation Sunday, Dr Scott Gottlieb was asked to give his thoughts on the pace at which vaccinations are being administered.

‘Well, the pace is slower than what was stated. I think it’s probably realistic to think that the pace is going to be a little bit slower, especially as we try to move through hard to vaccinate populations next month,’ Gottlieb said.

‘I suspect there’s more than a million (more) who have been vaccinated. There’s a lag in reporting. But the idea that we’re going to get to 20 million vaccines, vaccinations by the end of the year, that’s probably unrealistic at this point,’ he added.

Dr Scott Gottlieb (pictured), the former commissioner of the FDA, said Sunday that getting 20 million COVID vaccinations administered by the end of 2020 is ‘unrealistic’ Meanwhile, The COVID Tracking Project reported Sunday evening that there were an additional 152,000 cases reported in the US and 1,395 deaths. That brought the coronavirus cases in the US to more than 19 million with at least 333,118 deaths. However many states have not reported their latest stats due to the holidays

He also pointed out that this was after only about 45 per cent of vaccines were shipped to states.

Gottlieb said he believes that better systems for vaccine distribution will eventually be put in place with states likely turning to ‘CVS and Walgreens to start distributing them in the community’.

‘But again, as you get out into the community, try to vaccinate a harder to reach population, it’s going to become significantly more difficult to get those vaccines out. And so the fact that we’ve struggled to vaccinate health care workers and nursing home patients, that shows we need to be investing more in these efforts,’ Gottlieb told CBS.

Meanwhile, The COVID Tracking Project reported Sunday evening that there were an additional 152,000 cases reported in the US and 1,395 deaths. However these numbers do not provide a true reflection of Sunday’s COVID cases as there is a lag in reporting from some states due to the holidays.

That brought the coronavirus cases in the US to more than 19 million with at least 333,118 deaths. According to the Project, there are are 118,720 people currently hospitalized with COVID-19 in the US.

Earlier on Sunday, Dr Anthony Fauci issued a warning to the American people that he believes the worst of the coronavirus pandemic is yet to come as the US is likely to suffer the effects of a holiday season travel boom.

In appearance on CNN’s State of the Union, Fauci was asked by host Dana Bash whether he agrees with President-elect Joe Biden that the darkest days of the pandemic lie ahead. 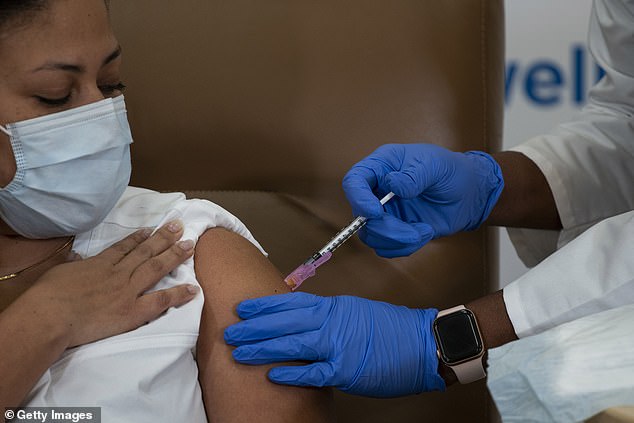 More than 1.9 million Americans have been vaccinated for the virus as of Saturday Citing 200,000 new cases of COVID-19 being reported each day, and with 2,000 Americans dying of the virus daily, Fauci insisted: ‘We are at a really critical point.’

‘We very well might see a post-seasonal [surge] in the sense of Christmas/New Year’s,’ he said. ‘I’ve described it as a surge upon a surge because if you look at the slope, the incline of cases as we have experienced as we have gone into the late fall and soon to be early winter, it is really quite troubling.’

He continued: ‘If you put more pressure on the system by what might be a post-seasonal surge because of the traveling and the likely congregating of people for the good warm purposes of being together for the holidays, it’s very tough for people to not do that. And, yet, even though we advise not to, it’s going to happen.

‘So I share the concern of President-Elect Biden that as we get into the next few weeks, it might actually get worse.’

US Surgeon General, Dr Jerome Adams, said on ABC’s This Week on Sunday that officials are ‘very concerned and we always see a little bit of a bump after holidays, and sometimes a large bump’.

‘The important thing for people to understand is that even if you traveled, it doesn’t mean you just throw your hands up in the air and say “oh well,”‘ Adams said. ‘There are measures that you can take.’

Trump, who leaves office on January 20 after losing November’s election to Biden, backed down from his earlier threat to block the bill, which was approved by Congress last week, after he came under intense pressure from lawmakers on both sides.

The Republican president, who golfed on Sunday and remained out of public view even as the government crisis loomed, had demanded that Congress change the bill to increase the size of stimulus checks for struggling Americans to $2,000 from $600 and also cut some other spending.

It was not immediately clear why Trump, who has refused to concede defeat to Biden, changed his mind on the stimulus package. Coronavirus cases surpassed 19 million in the US on Sunday and deaths hit 333,118 After signing the bill behind closed doors at his beachside club, Trump sought to put the best face on his climb-down, saying he was signing the bill with ‘a strong message that makes clear to Congress that wasteful items need to be removed.’

‘Much more money is coming,’ he insisted in a statement, though he provided nothing to back this promise.

And with less than a month left in office, Trump is expected to gain little or no traction with lawmakers to make changes.

White House officials have been tight-lipped about Trump’s thinking but a source familiar with the situation said some advisers had urged him to relent because they did not see the point of refusing.

Democrats have long been on board with the $2,000 payments but many Republicans have opposed it, making it unlikely that the figure will be revised upwards while Trump is in office.

Many economists agree the financial aid in the bill should be higher to get the economy moving again but say that immediate support for Americans hit by coronavirus lockdowns is still urgently needed.

Unemployment benefits being paid out to about 14 million people through pandemic programs lapsed on Saturday, but will be restarted now that Trump has signed the bill.

The package includes $1.4trillion in spending to fund government agencies. If Trump had not signed the legislation, then a partial government shutdown would have begun on Tuesday that would have put millions of government workers’ incomes at risk.

The relief package also extends a moratorium on evictions that was due to expire on December 31, refreshes support for small business payrolls, provides funding to help schools re-open and aid for the transport industry and vaccine distribution.

Global share prices ticked up in response to the news that Trump had signed the stimulus plan and backed away from a government spending crisis. 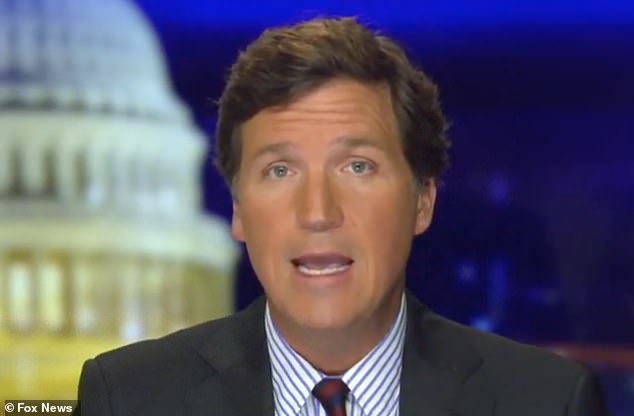 Tucker Carlson turns on Trump and blames the president for U.S. Capitol riot