Just 4% of crimes linked to e-scooters results a charge, figures show, despite vehicles being linked to hundreds of shoplifting and drugs offences

By Holly Bancroft For The Mail On Sunday

Just one in 25 crimes involving electric scooters have led to a police charge, an investigation by The Mail on Sunday has found.

Figures also show 52 people have been injured by e-scooters, which are becoming an increasingly popular mode of transport for muggers and drug dealers.

While rental e-scooters were made legal in 24 areas across the UK this summer, private vehicles are banned on roads and in parks. Despite that, retailers saw a surge in demand in the run-up to Christmas.

Criminals have been known to use e-scooters when committing crimes such as mugging and drug dealing. Their use is highly regulated, though people can rent scooters in areas such as Milton Keynes, pictured The Metropolitan Police recorded 217 offences, the highest of any force that replied

Even before the expected arrival on streets of thousands more e-scooters – some adapted so they can exceed the permitted 12.5mph top speed – figures show the scale of offending. Responses to Freedom of Information requests show 480 offences linked to the scooters, including shoplifting and drug possession, between January 1 and October 31 this year. Only 19 people have been charged – just 4 per cent of the total.

The Metropolitan Police recorded 217 offences, the highest of any force that replied, followed by Bedfordshire with 132. The true number of offences is likely to be higher as only 19 of the 42 forces in England were able to provide details.

David Davies, director of the Parliamentary Advisory Council for Transport Safety, said: ‘The Government seems to be completely missing the problems of illegal private use. A lot of companies seem to be selling these things hand over fist and take no responsibility for the fact they are going to be used illegally. My suggestion would be to make it easier for the police to simply confiscate these things – get them off the road.’

Rental scooters are speed limited and users must have a valid driving licence. Privately owned ones are illegal, although sales have tripled this year.

Shadow Green Transport Minister Kerry McCarthy MP said: ‘The Government rushed to roll out e-scooter pilot schemes at the start of the pandemic and the lack of clarity has caused confusion and concern. Some have taken it as a green light to use their own private e-scooters, which remains illegal, and police forces have struggled to respond to this.’ Superintendent Simon Ovens from the Met Police warned: ‘Where we saw bicycles and mopeds used in snatches, that’s what we’re now finding with e-scooters. They’re too dangerous. They are too difficult to control. While we have seized e-scooters which can operate up to 40mph, there are some which can reach 70mph.’

Middlesbrough was the first to trial a rental scheme but, within hours, youngsters were seen joyriding through a shopping centre.

The Department for Transport said: ‘There are already strict and clear laws in place governing e-scooters – which are not legal to use on public roads. Enforcement of road traffic law is a matter for chief constables, as part of local policing plans.’ 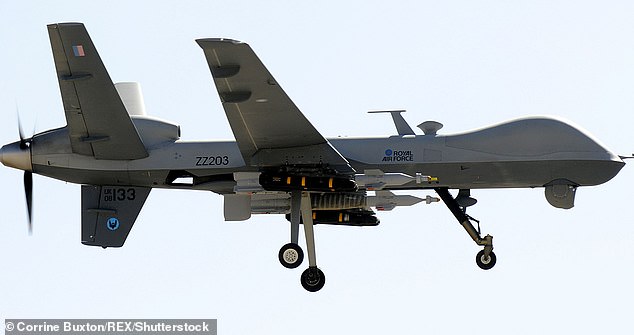