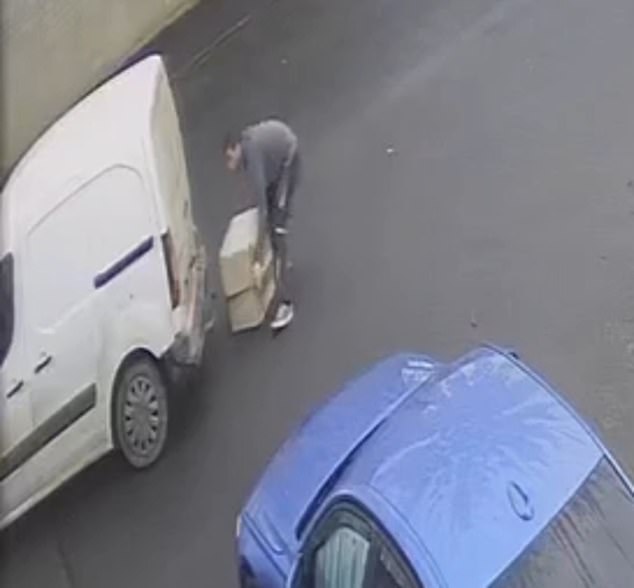 CCTV footage appears to show a man stealing a package from outside a home in broad daylight.

Footage posted on social media showed a white van driving past a house in Drumaness in County Down, Northern Ireland.

One man can be seen jumping out of the white van while another turns the vehicle around at the end of the street.

At one point the man appears to be hiding behind a wall until his driver has turned the car fully around.

The man, who is dressed in dark coloured clothes, can be seen in the corner of the video walking while holding a package.

He then opens the back of the van and places a package inside before getting back into the passenger seat of the van, which then drives off camera.

Police confirmed that they arrested two men in connection with the incident.

Both men were taken into custody for questioning and were later released on bail pending further enquiries.

A spokeperson for the Police Service of Northern Ireland: ‘Police arrested a man aged 36 on suspicion of theft and a man aged 63 on suspicion of aiding and abetting theft after a report was received of the theft of a parcel from outside a house in the Drumaness area on Tuesday 22nd December.

‘Both men were taken into custody for questioning and have since been released on bail pending further police enquiries.’

So-called ‘parcel pirates’ are not uncommon at this time of year when there is a higher number of packages delivered in the run up to Christmas.

It concerns thieves who strike by taking parcels left unattended on the doorsteps of residential homes.

From January to November of this year the PSNI recorded a total of 3,225 residential burglaries, the Belfast Telegraph reports.

Complaint resolution service Resolver also revealed it received 7,750 reports of parcels being stolen from doorsteps in Surrey between April and September of this year.

Newry, Mourne and Down SDLP councillor Hugh Gallagher told Belfast Telegraph he had heard other reports of packages being stolen near where this incident took place.

‘Coming up to Christmastime, people seem to be following parcel deliverers and hoping that the deliverer will leave it outside and they will then try and take it. It’s a worrying trend,’ he said.

‘People just need to be careful coming up especially to this time of year.

‘I would encourage everyone to be very vigilant and keep an eye out on things, especially with strange cars following them around.’

Modern flats could be unmortgageable amid crisis over building safety 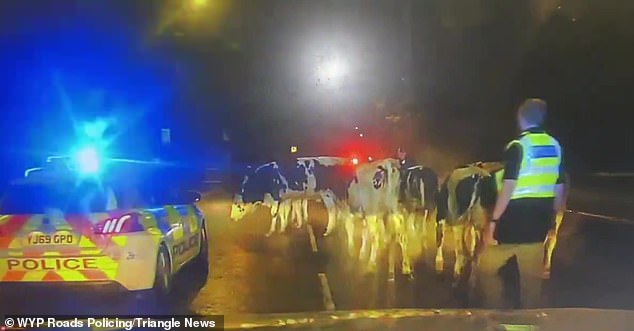