Jason Chaffetz on Wednesday called on Democrats to ‘cut out the pork and all the reckless spending’ from the COVID relief bill after President Donald Trump’s demand for $2,000 relief checks.

The former House Oversight Committee chairman was guest hosting Sean Hannity’s show on Fox News when he told viewers: ‘Congress has a choice to make.

‘Will they deliver needed aid to Americans struggling [in] the pandemic, or will they retreat to the old ways of Washington, where pork-packed projects, foreign nations, and the special interests take priority over the forgotten men and women of the United States of America?’

Trump’s demand for additional relief money for Americans blindsided all of Washington – members of both parties on Capitol Hill and several of his White House staff alike.

The president’s last-minute objections are setting up a defining showdown with his own Republican Party in his final days in office.

House GOP Leader Kevin McCarthy said it would not happen, telling his fellow Republicans on a conference call Wednesday that the unanimous consent request Nancy Pelosi plans for the $2,000 checks will not go through.

Jason Chaffetz on Wednesday called on Democrats to ‘cut out the pork and all the reckless spending’ after President Donald Trump’s demand for $2,000 relief checks

Trump left Washington D.C. for Christmas at his Mar-a-Lago resort Wednesday afternoon – less than 24 hours after releasing a video on Twitter suggesting he would veto the finally negotiated COVID-19 aid package, which is attached to a government funding bill.

He had called the aid package a ‘disgrace’ and later vetoed the National Defense Authorization Act telling Congress he couldn’t sign the bill for a number of reasons, including that it sought to rename military bases named after Confederate figures.

Trump later retweeted his 2014 post about government waste which read: ‘I hope we never find life on other planets because there’s no doubt that the U.S. Government will start sending them money!’

Chaffetz said Wednesday: ‘President Trump was elected to be a disruptive force. He was never a ‘go along to get along’ politician.

‘Will they also agree to cut out the pork and all the reckless spending in the legislation? They probably won’t. Unfortunately, wasteful spending and misplaced priorities are nothing new inside the Democrats’ ever-growing far-left wishlist.’ 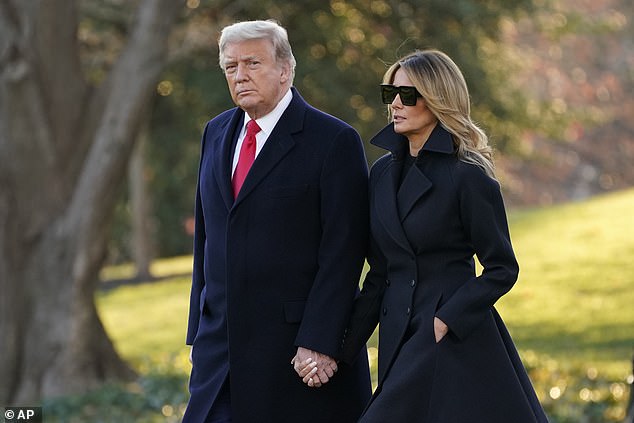 Trump left Washington D.C. for Christmas at his Mar-a-Lago resort with Melania Wednesday afternoon – less than 24 hours after releasing a video on Twitter suggesting he would veto the finally negotiated COVID-19 aid package, which is attached to a government funding bill

Trump has five days to sign the package or else the government will shut down, which is what lawmakers were working so hard to avoid.

Up until Tuesday night, all signs pointed to the bill’s immediate passage with Trump’s signature once it finally reached his desk.

Legislative affairs staffers in the White House and others involved in the negotiations had no idea Trump was taping the video and apologized to the surprised lawmakers.

Both houses had easily passed the bill – 359-53 in the House and 91-7 in the Senate – both far above the two-thirds which would be needed to override a veto, but there may not be enough time in the Congressional calendar to fix it.

The $900billion stimulus plan Congress approved Monday would provide direct aid to citizens as well as aid to businesses.

Trump did not specifically vow to use his veto power, and there may be enough support in Congress to override him if he does.

But the consequences would be severe if Trump upends the legislation. It would mean no federal aid to struggling Americans and small businesses, and no additional resources to help with vaccine distribution.

To top it off, because lawmakers linked the pandemic relief bill to an overarching funding measure, the government would shut down on Dec. 29.

The final text of the more than 5,000-page bill was still being prepared by Congress and was not expected to be sent to the White House for Trump’s signature before Thursday or Friday, an aide said.

That complicates the schedule ahead. If Trump vetoes the package, or allows it to expire with a “pocket veto” at the end of the year, Americans will go without massive amounts of COVID aid.

A resolution could be forced Monday. That’s when a stopgap funding bill Congress approved to keep the government funded while the paperwork was being compiled expires, risking a federal shutdown.

Democrats are considering another stopgap measure to at least keep government running until Biden is sworn into office Jan. 20, according to two aides granted anonymity to discuss the private talks.

The House was already set to return Monday, and the Senate Tuesday, for a vote to override Trump’s veto of the must-pass defense bill. Democrats may try again at that time to pass Trump’s proposal for $2,000 checks, as well as the temporary government funding measure to avert a shutdown, the aides said. Dr. Dre sends a message after being hospitalized for a brain aneurysm | The State