New York City Mayor Bill de Blasio said Wednesday that one of the main lessons he’s taken away from the coronavirus pandemic  is the importance of sleep – despite more the virus killing 24,000 New Yorkers and countless local businesses being left decimated.

De Blasio, who is said to be renowned for his cat-naps between meetings at City Hall, offered the remarks in response to a question from a reporter during his daily press briefing Wednesday.

The reporter, from NY1, asked the mayor what he has learned about himself while attempting to lead the city through 10 months of turmoil.

‘One thing, I’ll tell you that I’ve learned — this is something that [first lady] Chirlane [McCray] used to lecture me on all the time — that sleep really matters,’ de Blasio said during the meeting, of which he was nearly 30 minutes late to, according to the NY Post. ‘I’ve not been someone who’s traditionally gotten enough sleep.’

He continued: ‘In the beginning of this crisis, it was crazy for all of us; I mean we were working every single day, very long hours, and no one was getting enough sleep.

‘I really saw that it had an impact, I mean, it makes it harder to fully think through things and, obviously, we all get more emotional when we’re tired. So, I learned the value of sleep for sure.’

The mayor was blasted online for the response, with one commenter saying: ‘He’s been sleeping since he got into office.’ 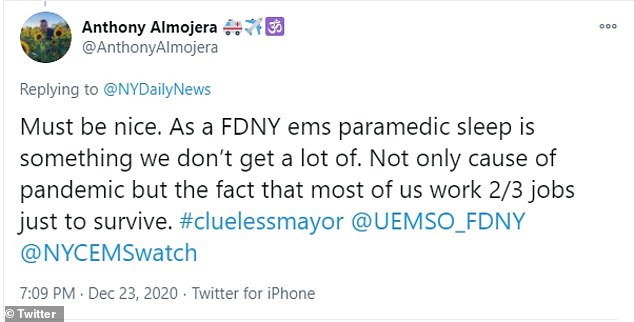 New York City was the hardest hit city in the early stages of the COVID outbreak in the US, and was at one time deemed the nation’s epicentre of the virus.

In the more than nine months since the pandemic began, the city has recorded 369,000 cases of the virus and 24,790 deaths.

De Blasio has routinely been criticized as somewhat of an absent mayor during his two terms in office, with local publications documenting his pre-COVID jaunts to the Park Slope YMCA in Brooklyn,  and his midday strolls through Prospect Park during the pandemic.

Hizzoner was also blasted for his messaging at the beginning of the outbreak, when he initially told constituents to carry on with life as normal while his top staffers urged him to act quickly to mitigate disaster.

During his Wednesday conference, the mayor thanked city employees who labored through the pandemic to keep the city running.

He also spoke about the frustrations that came as a result of rapidly changing guidance from the federal government about the disease, and how difficult he found it to relay that information to the public.

‘In the beginning I was trying to communicate, I now realize I wish I had been able to communicate this better … this job requires so much detail work,’ he said.

A City Hall spokeswoman later defended his remarks about sleep to the New York Post, saying: ‘After such a hellish year, all New Yorkers deserve to get some sleep.’

But the spokesperson’s words did little to calm the frustrations of social media users, who were quick to ridicule de Blasio for his ‘insensitive’ comments. 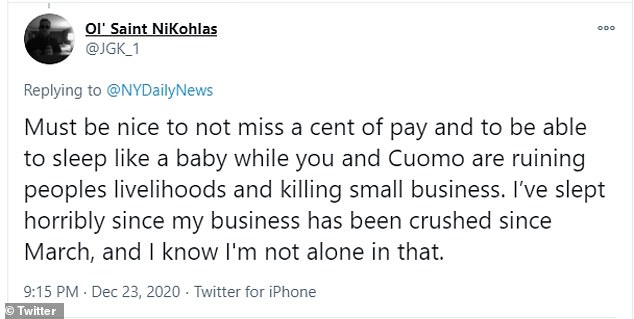 ‘Must be nice,’ wrote Anthony Almojera. ‘As an FDNY EMS paramedic sleep is something we don’t get a lot of. Not only cause of the pandemic but the fact that most of us work 2.3 jobs to survive.’

Another user waded in to add: ‘Must be nice to not miss a cent of pay and to be able to sleep like a baby while you and Cuomo are ruining peoples livelihoods and killing small business.

‘I’ve slept horribly since my business has been crushed since March, and I know I’m not alone in that.’

Others seized the moment as an opportunity to let de Blasio know just what they have thought of his performance as mayor in the last six years.

‘This from the guy who’s been asleep on the job from day one,’ one user sarcastically quipped.

Another chimed: ‘I want proof this guy was actually elected by the people of NY.’

A third wrote: ‘If de Blasio’s governing though the pandemic has taught me anything, it’s the importance of de Blasio going into hibernation now, and coming out on December 31, 2021.’

Quips regarding the mayor’s sleeping habits were also widely featured, with one commentator writing: ‘He’s been sleeping since he got into office.’

De Blasio’s staff members have said to have been frustrated by his tardiness and strange sleeping habits since his tenure began in 2014.

On January 14, 2014, just days after being sworn into office, the NY Post reported that staffers were already shopping for an alarm clock to help get him out of bed.

In an email exchange obtained by the outlet, staffers included potential models of clocks in the exchange, under the subject line ‘Visible Clock For Mayor’.

However, while a clock was confirmed to have been purchased, it reportedly did little to help the staffers’ cause. A City Hall spokeswoman later defended de Blasio’s remarks about sleep to the New York Post, saying: ‘After such a hellish year, all new Yorkers deserve to get some sleep’

In November the same year, the newly elected mayor reportedly arrived 20 minutes late for a memorial service for those who died in the crash of American Airlines Flight 587 in November 2001.

In doing so, the mayor missed the tolling of the bell and the moment of silence.

‘I had a very rough night and woke up sluggish. And I should have gotten myself moving quicker,’ he told reporters at the time. ‘Just woke up in the middle of the night, couldn’t get back to sleep and felt really sluggish and off-kilter this morning.’

De Blasio was also said to be notorious among officials at City Hall for rarely arriving at his office before 10am – even when he’s running on time.

Instead, he’d often arrive late and go to the gym in Prospect Park. When he was in the office, staffers claimed in 2017 that he’d sneak off for midday naps in his downtown offices.

In 2019, de Blasio showed up nearly an hour late for a live television interview on WPIX Channel 11’s morning show, even though the station’s studios are just a short drive from his home on Upper East Side.

He told the show’s anchor Dan Mannarino that he set his alarm clock for the wrong time. Day of the Dead: suicides, accidents and COVID-19, the terrible 2020 for the famous | The NY Journal The Mexican Kim Kardashian, Joselyn Cano, steals glances posing without a bra and in a thong | The State