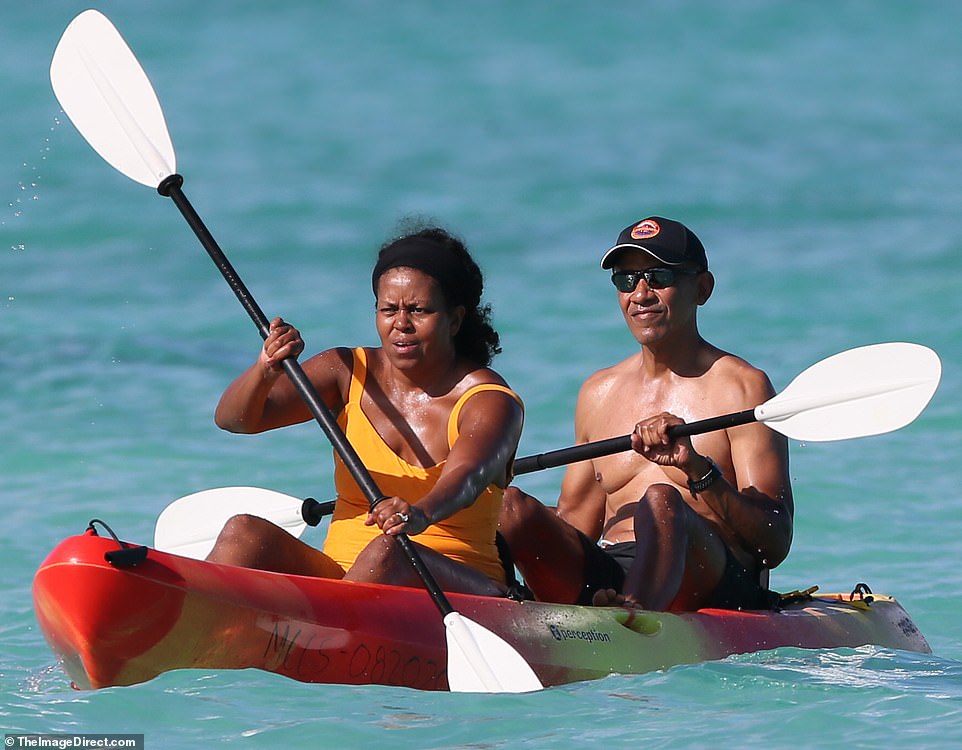 It takes two, baby! Michelle Obama puts in most of the work as she and Barack do some pre-Christmas, couple’s kayaking in Hawaii

Barack and Michelle Obama are warming up for the holidays in Hawaii, where they were pictured on Tuesday soaking up the sun in some colorful swimwear as they kayaked together in the ocean.

The pair were photographed in the water at Kailua Bay, a stone’s throw from Plantation Estate, their ‘winter White House’ which they rented over the holidays when Barack was in office.

Sporty Michelle appeared to be putting in most of the work while her former President husband sat back and took in the sights, before eventually lending a hand then hauling their kayak to shore.

It’s unclear if they’re staying there this year or if they are somewhere else. The pair are said to be making plans for a different property on the island of Oahu.

Come on, honey, help me out! Michelle Obama did most of the heavy lifting during an outing on the water at Kailua Bay on Tuesday. The former first couple are spending Christmas in Hawaii, as they have done in many previous years Michelle, wearing a bright orange swimsuit, gets stuck in as Barack takes in the scenery Michelle went make-up free and wore her hair tied off her face. Barack wore a baseball hat and some sunglasses Finally! The former president started helping eventually, though the pair were paddling in opposite directions Barack, 59, redeemed himself by hauling the kayak back to shore once the pair had had enough for the afternoon

Michelle, 56, went au natural with no make-up and her hair tied off of her face. She was festive in bright orange swimsuit which matched the kayak.

Barack, 59, looked happy and relaxed in a pair of dark swim shorts, sunglasses and a baseball hat. He went shirtless, which revealed a taut physique.

The pair’s two daughters, Sasha and Malia, were not in sight but they are thought to be spending the holidays together.

Michelle appeared to do most of the work on the water, leading their tandem paddle while Barack largely sat back and took in the stunning scenery.

They were joined by what looked like a Secret Service agent on the water, and some other people who were out on small boats nearby. Easy work! Barack sat back in a relaxed pose and seemed to be enjoying the scenery of the nearby island Had enough? Michelle appeared to grow tired in the afternoon sun as she paddled the pair through the water 2020 has been a busy year for the pair which brought them a handful of lucrative contracts.

Michelle’s 2018 book becoming was parlayed into a book/speaking tour and Netflix documentary about her life promoting it.

The documentary was produced by their company, Higher Road.

She also launched a podcast on Netflix and interviewed her husband as one of her first guests during their months at home in quarantine.

The pair also endorsed Joe Biden. Michelle gave a pre-recorded video message for the virtual DNC in his favor. Barack and Michelle have spent the year campaigning, sometimes virtually, for the Democrats and endorsing Joe Biden The pair have been visiting Kailua for years. It is where they spent the holidays when Barack was in office The couple’s two daughters, Sasha and Malia, were nowhere to be seen. It’s unclear where they are but the family is likely to spend the holidays together