‘As our election contest continues, I’ll make you a promise. We’re going to keep fighting until every legal vote is counted,’ Pence told the crowd on a trip to Florida.

‘We’re going to keep fighting until every illegal vote is thrown out,’ he added.

He urged screaming young supporters to ‘stay in the fight’ – even as the crowd cheered to ‘stop the steal’ and called for ‘four more years.’

Vice President vowed to ‘keep fighting until every legal vote is counted,’ after the Electoral College met and made Joe Biden’s win official

His appeals prompted the crowd to break into a chant of ‘Stop the steal!’ at what was part of the group’s student action summit.

He couched his demands for fairness in careful language – after President Trump held days of meetings with lawyers claiming a conspiracy theory involving voting machines rigged the election. Trump also met with conservative House members Monday seeking to challenge the election when a joint session meets to count the votes – and Pence presides.

‘We’re going to keep counting until every illegal vote is thrown out. We’re going to win Georgia, we’re going to save America, and we’ll never stop fighting to make America great again. You watch,’ he told the crowd. 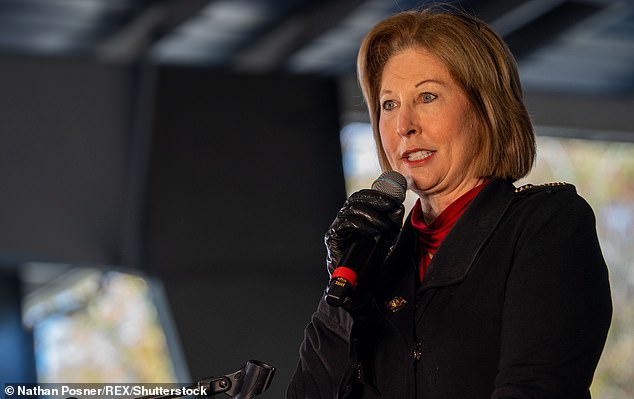 Pence defended President Trump’s effort to overturn the election results, but spoke only in general terms of making sure every vote is counted 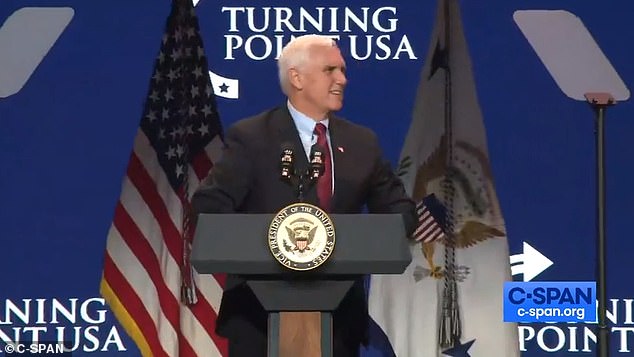 Members of the crowd chanted ‘Stop the steal!’ during Pence’s remarks Pence pitched the reelection of GOP Sen. David Perdue in Georgia and Sen. Kelly Loeffler. Both face runoffs there. Trump also called for reelecting both, while accusing  Republican state officials of working against him 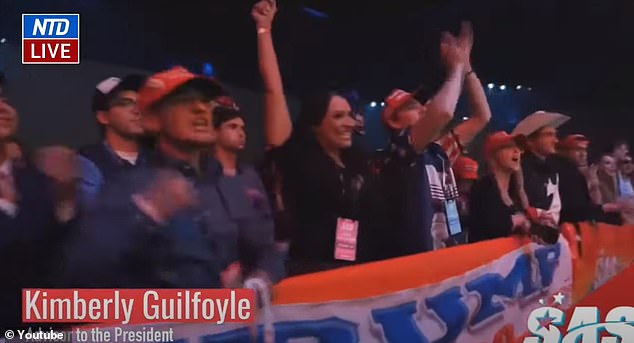 The event featured little social distancing, according to a pool reporter. Trump campaign advisor and Donald Trump Jr.’s girlfriend Kimberly Guilfoyle was there

His appearance followed reports that Trump has fumed that Pence isn’t doing enough to fight to overturn the election results, Axios reported.

The attacks come as the president surrounds himself with new outside advisors who are feeding him theories about the election being stolen – even as White House aides have sought to tamp down ideas like Mike Flynn’s public pitch to use martial law to rerun elections in states Trump lost.

The also follow a new online ad by the anti-Trump Lincoln Project that seeks to inflame any potential doubts Trump harbors about his VP.

Pence began by bringing greetings from Trump, who has been holed up in the White House for days and focusing on his claims of election fraud.

‘With your support, President Trump and our team received more than 74 million votes across America,’ Pence said, accurately stating Trump’s vote total, which Trump often rounds up to 75 million. He noted it was 10 million more than in 2016 ‘and more votes than any incumbent president in American history.’ That is also true – although Joe Biden got 81 million votes, making him the popular vote winner. The Electoral College has made Biden’s 306 to 232 win official. His speech came a day after departing Attorney General Bill Barr stood by comments that he didn’t see widespread election fraud that would overturn the results, and would not name a special counsel to probe Trump’s claims of fraud.

Pence also touted the administration’s vaccine efforts – although according to a pool reporter traveling with him, there was virtually no social distancing, with students sitting shoulder to shoulder in chairs, then standing during much of the speech.

Once again, Pence heaped adulation on Trump, despite reports of the rift. He called Trump ‘a leader who has fought every day to keep the promises he’s made to the American people and a man who will never stop fighting to Make America Great Again.’

In the final days before ending his term, the president has fumed about people failing to sufficiently rally to his side, with his outrage variously directed at Pence, White House counsel Pat Cipollone, Chief of Staff Mark Meadows, Secretary of State Mike Pompeo and Senate Majority Leader Mitch McConnell, several top officials told Axios.

Sources claim the president has become ‘fed up’ with Cipollone, who was one of his defense team in the Senate when Trump was impeached.

The president, according to a source who spoke with Trump, feels Pence isn’t fighting hard enough to overturn the election results.

The same source says that a Lincoln Project ad suggesting Pence is ‘backing away’ from Trump has gotten into the president’s head and made him more paranoid about his relationship with the vice president.

Some supporters of the White House counsel are concerned that Trump is considering firing him just days before leaving office and replacing him with a loyalist. 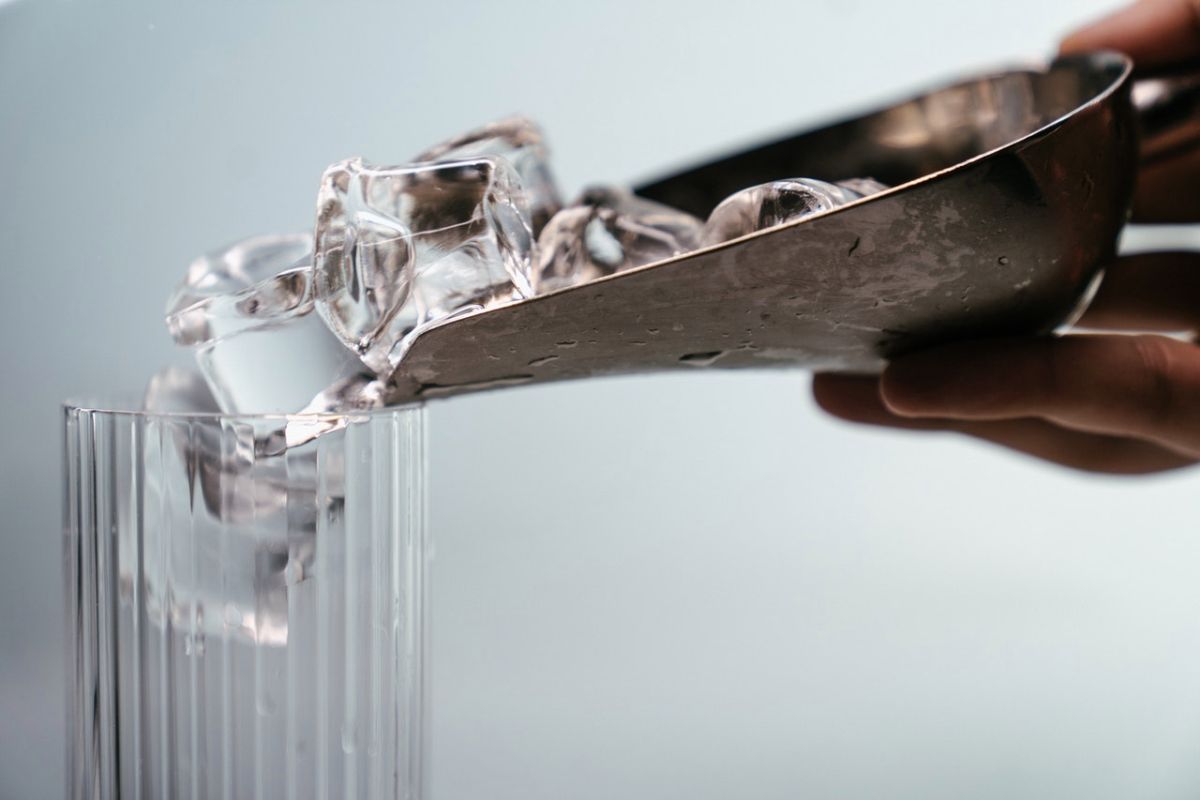 Pineapple Tepache: the benefits for your health and how to make it easily | The State