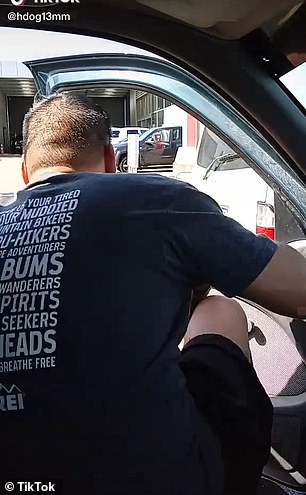 ‘When you gotta go’: Crazy moment a man hops into a PORTALOO being towed by a truck for a quick pit stop – after being dared by his mate

A New Zealand man’s bet with a mate earned him thousands of social media views, free beer and a possible traffic fine after he came up with a new way to avoid pulling over for a toilet stop.

Chaz Hayward was a passenger in his friend Hayden Saxton’s ute as the pair were driving along a major road in Mount Maunganui when they spied a portaloo being towed by a truck in front of them.

In a video uploaded to TikTok last week, Mr Hayward can be seen racing out of the ute and into the back of the portaloo as it stops at a set of traffic lights. 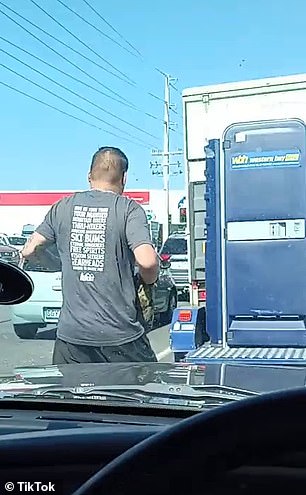 In the video posted online, Mr Hayward can be seen taking up the bet by racing to the portaloo while the truck is stopped at traffic lights (pictured)

After being inside for a few minutes, Mr Heyward can then be seen jumping back out and into the ute when the truck stops at the next set of lights.

He explained his mate had dared him to use the fast moving loo for a carton of beer.

‘We were stuck in traffic and he goes, ‘you won’t jump in that portaloo for a box’ and I said ‘probably not actually’,’ Mr Hayward told the Bay of Plenty Times.

He then explained after thinking about it, the deal didn’t sound too bad so he went into action when the truck temporarily stopped.

‘Then the truck started driving away with me in it,’ he explained.

‘I just thought I would have to wait until it stopped again before I could get out.’

Fortunately for Mr Hayward the loo was being transported to a new location and had been freshly cleaned.

‘What happens if you get in and there’s no toilet paper,’ another person said.

‘Or if the truck goes on the highway and you’re stuck there,’ added another.

Western Bay Hire, which owns the portaloo said the video gave then a good chuckle.

‘We were a bit nervous when we first saw it, that he was going to keep driving off. That would’ve been a pretty crappy situation.’ the company’s finance consultant Maverick Beauchamp said. 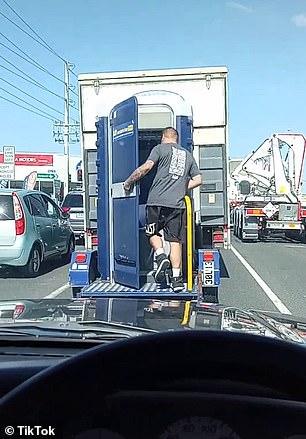 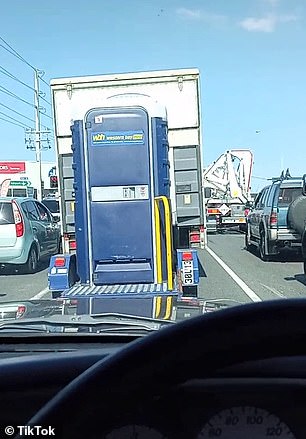 Mr Hayward and his mate stopped off at the bottle shop shortly after the toilet caper where he was rewarded with a case of Canadian Club.

New Zealand Police said they were aware of the incident.

‘Without knowing more about the circumstances, it’s not really something we can provide comment on, except to urge people not to act in a way that may put themselves or other road users at risk,’ a police spokesperson said. From the balcony, Gomita shows off her curves in lingerie | The opinion 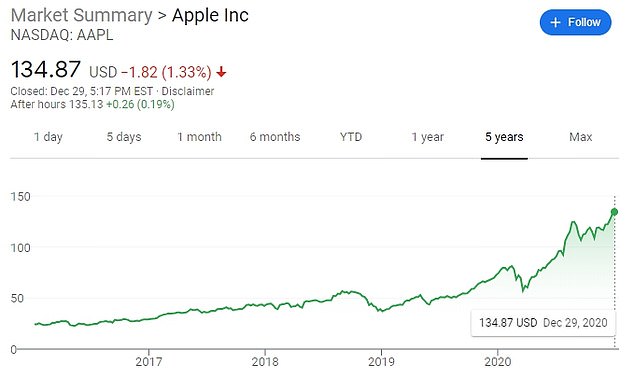