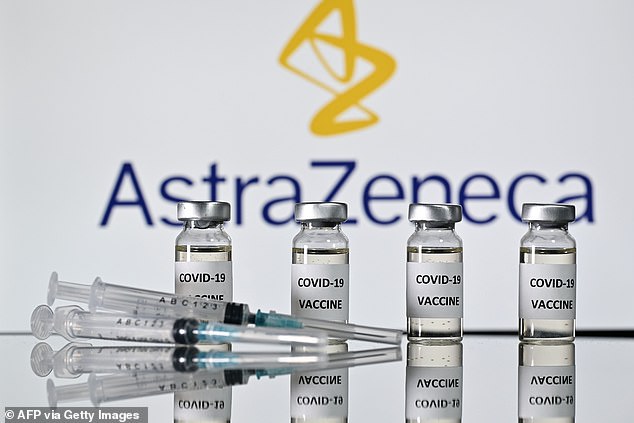 Oxford University’s coronavirus vaccine is expected to be approved within days of Christmas, raising hopes that millions of people a week could soon be being inoculated.

Senior Whitehall sources are said to believe that the Medicines and Healthcare product Regulatory Agency will authorise the vaccine on December 28 or 29. They are waiting for the final data from the Oxford scientists, which will be provided on Monday.

The latest positive sign comes after Professor Sarah Gilbert, the lead researcher behind the new vaccine, said on Friday that she hoped the jab ‘isn’t too far off’ from being approved.

And Professor Martin Marshall, the chairman of the Royal College of GPs, said on Saturday morning that the Oxford jab will allow the vaccination process to happen at a ‘much faster pace’.

More than 140,000 Britons have already received the Pfizer/BioNTech coronavirus vaccine, after it was approved by the MHRA earlier this month, but it needs to be stored at around -70, whereas the Oxford vaccine can be kept at room temperature.

However, there are increasing fears England could be about to enter a third lockdown after Mr Johnson refused to rule out the drastic step.

Latest figures from the Department of Health show there are 18,469 patients in hospital with coronavirus, the highest number since mid-April.

Oxford University’s coronavirus vaccine is expected to be approved within days of Christmas, raising hopes that millions of people a week could soon be being inoculated

Once the Oxford vaccine – which was produced with the backing of private firm AstraZeneca – is approved, football stadia and race courses nationwide will open from the first week of January to allow mass vaccinations, the Telegraph said in their report.

It means that as many as 20million of the most vulnerable Britons could have been vaccinated by March, allowing for some restrictions to be relaxed.

The UK has ordered 100million doses of the Oxford vaccine, allowing for a major expansion of the NHS’s vaccination programme.

Other countries which have ordered the jab will receive a confidence boost if it is approved by the respected MHRA.

The first batch of four million doses of the Oxford vaccine will be delivered from the Netherlands and Germany.

Although the new jab will mostly be manufactured in the UK, making it easier to roll-out. The 100million doses, plus the 40million of the Pfizer vaccine which have already begun being rolled out, will be enough to vaccinate the whole country.

The MHRA has taken longer to approve the new vaccine because volunteers in the clinical trial received different doses.

The second group, however, is smaller and included no one who is over 50 and more at risk from the virus – making it hard to determine which regimen is best.

Speaking to BBC Radio 4’s Today programme, Professor Gilbert said the trial results had pleased but also ‘intrigued’ researchers and ‘immediately led to thoughts of wanting to do more work’. The latest positive sign comes after Professor Sarah Gilbert, the lead researcher behind the new vaccine, said on Friday that she hoped the jab ‘isn’t too far off’ from being approved

‘So it wasn’t quite the climax that it might have been,’ she said.

‘But we’re very happy with with the way the vaccine is performing, really looking forward to the point where people can start to be vaccinated outside of clinical trials.

GPs have been told to use a sixth dose of Pfizer’s Covid-19 vaccine by the NHS, after it emerged yesterday that its vials contain an extra shot of the jab.

Britain’s medical regulator says every vial – the small glass container which holds the liquid vaccine – holds five doses, administered in 0.3ml shots. But it admitted that once the vaccine is diluted before being given out, a vial holds as much as 2.25ml – enough for seven and a half doses.

Doctors and nurses administering the vaccine have now been told to use one of the extra doses ‘at their discretion’, in a weekly webinar with NHS England.

The sixth dose will boost the amount of vaccine available in the UK by 20 per cent, allowing an extra 160,000 people to get the shot with the 800,000 delivered this month alone. It could also mean up to 8million more people could be vaccinated using the Pfizer jab once the UK receives its total order of 40million doses.

The UK Medicines and Healthcare products Regulatory Agency (MHRA) confirmed to MailOnline yesterday that ‘small’ amounts of the jab are going unused, and that the vials contain extra in case of spills and because some gets stuck in the syringe.

It insisted, however, that ‘additional product is not being wasted’ because the extra liquid was never intended to be used and is only there as a backup.

‘Obviously I can’t prejudge that moment, the regulator’s have to be given their time to make their decisions but I really hope that that moment isn’t too far off.’

It took regulators eight working days to give Pfizer’s vaccine the go-ahead after the Department of Health officially requested they evaluate it.

But the Oxford/AstraZeneca vaccine has yet to be approved, despite being under review for nearly a month.

Royal College of GPs chair Dr Marshall, who is also still a working GP in London, said on BBC Radio 4 this morning: ‘At the moment we are dealing with this Pfizer vaccine which is difficult.

‘On the assumption that we are going to get approval for the AstraZeneca vaccine which is much more familiar because it is much more like the flu vaccination then I think we will be able to roll out at a much faster pace but certainly over the next few weeks and next couple of months we expect all care homes to be covered.’

He added that ‘good progress’ had been made with the vaccination programme so far.

‘We are going to be ready for rolling out the vaccine at scale into care homes over the next few weeks. It is a complicated process as you say,’ he said.

‘The Pfizer vaccine needs to be looked after very carefully.

‘The numbers of course in care homes are much smaller than the numbers we are delivering in our own clinics but we are getting there.

‘The vaccine as you’ve suggested is not stable if you don’t manage the temperatures really well.

‘It comes out of the freezer – the -70 temperatures – is brought to general practice in normal fridges at 4-7 degrees.

‘It then needs to be taken out of those fridges and transported in temperature-controlled boxes, in small packs of course as you’ve described into each individual care home.

‘That is carried out by either a doctor or a nurse into the care homes. These are the care homes that we in general practice know already. We know the residents already.

‘There the vaccine will be reconstituted with saline, drawn up into individual syringes and then administered to the individual residents and their staff, having of course first made sure that they’re eligible and that we’ve got proper consent.’

However, when asked if England would follow the lead of Wales and Northern Ireland in announcing plans for new lockdowns later this month, Mr Johnson refused to rule out the drastic step. He replied: ‘We’re hoping very much that we will be able to avoid anything like that.

‘But the reality is that the rates of infection have increased very much in the last few weeks.’

Schools minister Nick Gibb had earlier insisted England’s tier system was ‘very effective’ but then added ‘we rule nothing out’ when asked about the possibility of a new lockdown after Christmas.

Officials are said to be planning a draconian Tier Four regime which would see shops shut and commuters ordered to work from home.

They are alarmed by a surge in virus cases since the second lockdown ended more than two weeks ago. A Government source told the Daily Mail last night that the Tier Four proposal was back on the table after being rejected by ministers last month.

‘We are not there yet but we are clearly in a worrying situation,’ the insider said.

‘It probably starts with closing non-essential retail and strengthening the work from home message.

‘But there are lots of things you could add to that – it’s still early days.’ Other sectors likely to be considered for closure in Tier Four include gyms, swimming pools and hairdressers.

A further 28,507 Covid cases were reported on Friday – the second highest total yet – along with 489 deaths. This figure was up from424 a week earlier. STEPHEN GLOVER: How to beat the eco warrior bullies? Apply the law!