The New York Times has admitted to ‘an institutional failure’ in the production of its podcast ‘Caliphate’ by giving ‘too much credence’ to the story of a man now revealed as a fantasist pretending to be a terrorist.

In a devastating internal review released on Friday, it was found that the paper had failed to corroborate the sensationalist claims made by Canadian Shehroze Chaudhry, 25, and that the podcast team was duped by his fake story of working as an ISIS executioner.

The review began after Chaudhry was arrested by Canadian authorities in September and charged with ‘a hoax regarding terrorist activity’ as he lies fell apart.

Chaudhry’s remarkable, yet untrue, story of being a fighter and executioner with the Islamic State in Syria had been the centerpiece of the award-winning ‘Caliphate’, for which reporter Rukmini Callimachi was nominated for a Pulitzer Prize, and won a Peabody Award.

Yet, the Times has now found that show, launched in 2018, dropped far short of the paper’s standards following widespread failings, right up to senior management.

They branded Chaudhry a ‘fabulist’ who concocted stories as an escape from his more mundane life in a Toronto suburb or living with grandparents in Pakistan.

Reporter Rukmini Callimachi, pictured above, was nominated for a Pulitzer Prize, and won a Peabody Award for her work on the ‘Caliphate’ podcast. She will remain at the Times Dean Baquet, the executive editor of the paper, took personal responsibility for the errors in the editorial process on Friday, saying that the blame fell on him and other newsrooom leaders.

‘When the New York Times does deep, big, ambitious journalism in any format, we put it to a tremendous amount of scrutiny at the upper levels of the newsroom,’ he said in an interview with The Daily, another New York Times podcast.

‘We did not do that in this case,’ he continued.

‘And I think that I or somebody else should have provided that same kind of scrutiny … and I did not provide that kind of scrutiny, nor did my top deputies with deep experience in examining investigative reporting.

‘I think this guy, we now believe, was a con artist, who made up most if not all that he told us.’

The Times said the two-month review had concluded that the 12-part podcast featuring award-winning correspondent Rukmini Callimachi, who has frequently reported on IS, ‘gave too much credence to the false or exaggerated accounts’ of Chaudhry.

The Times had ample reason to be suspicious of Chaudhry’s account, since an episode of ‘Caliphate’ was devoted to discrepancies in his story and its own fact-checking.

But the newspaper said Friday it should have worked harder to verify the claims before deciding to make Chaudhry a central character. 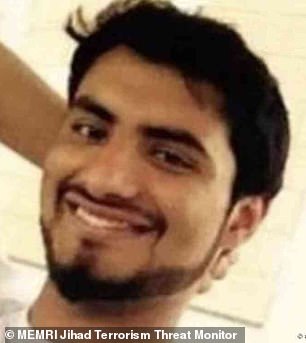 The paper had failed to cooborrate the sensationalist claims made by Canadian Shehroze Chaudhry, 25, pictured

The review into Caliphate had two separate teams: one to focus on the podcast itself, and another on Chaudry and his claims.

It ‘found a history of misrepresentations by Mr Chaudhry and no corroboration that he committed the atrocities he described in the Caliphate podcast’, according to an editor’s note published Friday.

Chaudhry had claimed he traveled to Syria in 2016 to join the terrorist group ISIS and committed acts of terrorism, including two killings.

He went by the name Abu Huzayfah in the podcast and described in harrowing detail his role in executions.

His account, as told to Callimachi, was incredibly graphic, in particular as he describes killing a man in an ‘orange jumpsuit.’

He says: ‘The blood was just — it was warm, and it sprayed everywhere….I had to stab him multiple times. And then we put him up on a cross. And I had to leave the dagger in his heart.’ The account caused an uproar in Canada’s parliament, with opposition Conservatives expressing outrage that Chaudhry was living freely in Ontario province after making the terror claims.

At the time, the Times claimed they had managed to secure a photo of Abu Huzayfah on the banks of the Euphrates River in Syria, an indication that he had indeed made the trip.

Scandals that rocked the New York Times in 2020

Bennet, who had revealed in a meeting that he had not read Cotton’s piece before it was posted online, had defended it following the initial protests, saying it was important to hear from all points of view.

Yet more than 800 staff members signed a letter protesting its publication.

Bennet then resigned from his position after the Times disowned the incendiary opinion piece by Cotton entitled, Send in the Troops, which advocated using federal troops to quell unrest across the US caused by the deaths of George Floyd and Breonna Taylor.

Following a review, the newspaper said Cotton’s piece should not have been published, at least not without substantial revisions.

July 14: One of Bennett’s hires, conservative opinion editor writer Bari Weiss, announced she had quit in a scathing letter that slammed the newspaper for fostering an ‘illiberal environment’ that allowed her to be bullied by coworkers.

Weiss, who joined the Times in 2017, said the paper of record was among the media institutions now betraying their standards and losing sight of their principles as she accused them of only publishing stories that ‘satisfy the narrowest of audiences’.

In her lengthy resignation letter addressed to publisher A.G. Sulzberger, Weiss claimed that intellectual curiosity and risk-taking was now a ‘liability’ at the Times.

The controversial editor and writer said the opinions of those on Twitter had become the newspaper’s ‘ultimate editor’.

Weiss also accused the outlet of creating a ‘hostile work environment’ for employees that essentially had anything other than left-of-center views.

She says this mentality resulted in her being constantly bullied by coworkers who have called her a ‘Nazi and a racist’ because of her ‘own forays into wrongthink’.

Investigators have now found that Chaudhry had passed along photos taken by others in Syria as his own.

There is also still some dispute over whether he even traveled to Syria. Canadian officials say he never did, nor did he ever join the Islamic State, although American intelligence officials still have some doubt, the newspaper said.

The Times said it would not be withdrawing the series. Instead, on Friday, it uploaded a new editor’s note to the podcast’s site explaining its failings.

‘From the outset, ‘Caliphate’ should have had the regular participation of an editor experienced in the subject matter,’ it read.

‘In addition, The Times should have pressed harder to verify Mr. Chaudhry’s claims before deciding to place so much emphasis on one individual’s account,’ the note added.

Callimachi said Friday that it was ‘gutting’ to let down her colleagues. She said she should have caught more of the lies Chaudhry told her, and tried to make clear what the newspaper did and didn’t know.

‘It wasn’t enough,’ she said in a statement. ‘To our listeners, I apologize for what we missed and what we got wrong. We are correcting the record and I commit to doing better in the future.’

‘Caliphate’ marked a foray into narrative audio reporting for the Times, which is increasingly seen as a major revenue stream for the paper.

The show became a major hit, rising to the top of the Apple podcast charts in 2018.

However, red flags surrounding the series’ veracity were never far away.

In 2017, Chaudhry also spoke to Canadian Broadcasting Corporation and told a different story, which the CBC detailed in a May 2018 article headlined: ‘Did former Canadian ISIS member lie to the New York Times or to CBC News?’

Nazim Baksh, a CBC News producer, said: ‘We asked him repeatedly, did you do anything, did you kill, did you execute, did you participate?

Five days after the CBC report, the New York Times published the sixth episode of Caliphate, in which Callimachi and her colleagues revealed they had found a problem with Abu Huzayfah’s timeline, and that his version of when he was in Syria did not stand up to scrutiny.

In October, the Times’ media columnist reported that senior editors had raised concerns about ‘Caliphate’ before its release.

The scandal has led to intense backlash for the paper of record, especially from other news organizations, which have accused it of allowing for fearmongering regarding the radicalization of Muslims.

‘Caliphate let listeners hear what they wanted to hear about Muslims. And fear sells,’ wrote the LA Times.

The findings are paricaulraly damning for Baquet who had continued to call Callimachi a ‘terrific journalist’ and ‘intrepid reporter’ even as the review was announced three months ago. Shehroze Chaudhry, 25, from Burlington, Ontario, has been charged with a terrorism hoax

In his interview with NPR on Friday, however, he did suggest that there should have been more oversight on her actions.

‘She’s a powerful reporter who we imbued with a great deal of power and authority,’ he said.

‘She was regarded at that moment as, you know, as big a deal Isis reporter as there was in the world. And there’s no question that that was one of the driving forces of the story.’

The review found that none of the podcast team was guilty of any knowing deception and Callimachi will remain at the New York Times, according to Baquet, but will be reassigned to a different beat.

However, after the Chaudhry scandal emered in September, other questionable reporting from Callimachi came to light, including grievances aired by the family of murder American ISIS hostage James Foley.

In October, they accused Callimachi of bullying them into talking to her and publishing inaccurate accounts in her stories.

‘She left our family with a lot of pain from her un-professionalism and lies,’ his borther Michael Foley told The Daily Beast.

Michael said he raised concerns with Callimachi’s coverage of his brother’s captivity and beheading with editors at The Times, including in a January 2015 letter to then international editor Joseph Kahn.

‘I would also like to bring to your attention, the extreme unprofessionalism and threats Rukmini directed to a grieving family only days after Jim’s horrific and public execution,’ he wrote at the time. 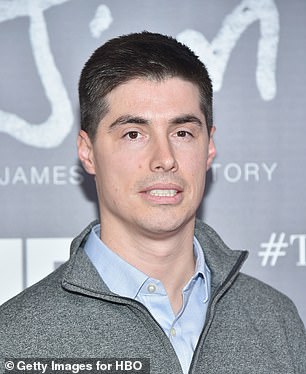 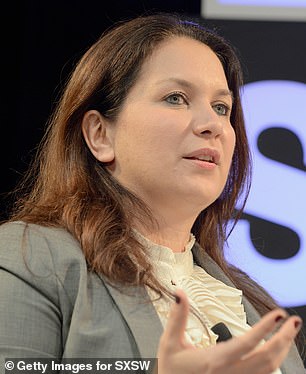 ‘On 2 occasions by phone, starting on Aug. 22nd, Rukmini threatened to publish a detailed torture story if I did not comply with her interview request.’

The brother raised objections to specific details in Callimachi’s articles about James’ time in ISIS captivity between 2012-2014, including that he had been repeatedly waterboarded and targeted for abuse by the terrorists, and that he had converted to Islam in earnest.

‘More specifically, I was told that if I did not publically [sic] discuss my concerns with US government support, that an article detailing Jim Foley’s torture would be published,’ Michael’s letter to The Times stated.

‘She cited pressure from her editors to print the torture story if I did not comply. I did ultimately bow to her threats, gave her a lengthy interview and she published torture accounts anyway.’

The Royal Canadian Mounted Police announced in October that they had arrested Chaudhry who has been charged with creating a hoax with his tall tales of terrorism.

‘Hoaxes can generate fear within our communities and create the illusion there is a potential threat to Canadians, while we have determined otherwise,’ said Superintendent Christopher deGale, the Officer in Charge of the RCMP O Division’s Integrated National Security Enforcement Team.

Chaudhry’s lawyer, Nader Hasen, said his client will ‘vigorously defend himself’ against the Canadian charges. He had no comment about the Times’ actions.

The Peabody Awards jurors are discussing what to do about its honor, executive director Jeffrey Jones said Friday.

Ricky Martin: In love she shows off her husband Jwan Yosef | The State