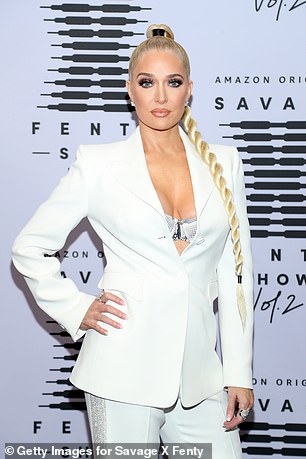 Real Housewives of Beverly Hills star Erika Jayne’s lawyer husband Tom Girardi has testified that he’s broke and lost up to $80million in cash as he faces an embezzlement lawsuit in court.

The couple, who filed for divorce in November, famously flaunted their wealth on the reality TV show with Jayne claiming she spent $40,000 a month on make-up and clothes.

He faces demands from creditors, high-interest lenders, lawyers, his first wife, and a security company that once guarded his Pasadena mansion for money.

But Girardi now claims he has little left and he hasn’t said where the money has gone.

‘At one point I had about 80million or 50million in cash. That’s all gone,’ Girardi said this fall in testimony in unspecified case, according to a Los Angeles Times report. 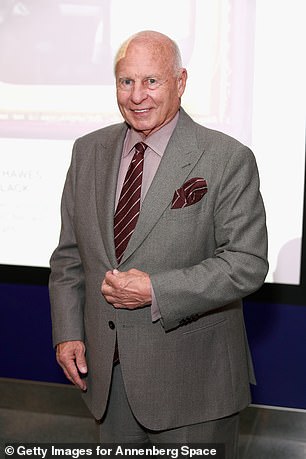 Tom Girardi, 81, (right), who is married to Real Housewives of Beverly Hills star Erika Jayne, 49, (left), has testified that he’s broke and lost up to $80million in cash as he faces an embezzlement lawsuit in court

To add to Girardi’s troubles, his wife Jayne, 49, filed for divorce on November 3, citing irreconcilable differences.

Most recently, he’s been accused of misappropriating $2million from the families of victims who died in the 2018 Lion Air plane crash that plunged into the Java Sea killing all 189 people on board.

On Monday US District Judge Thomas M. Durkin overseeing the plane crash victims case in Illinois froze Girardi’s assets and called his mishandling of money meant to go to the Indonesian children left orphaned by a plane crash ‘unconscionable’.

When asked point blank where the money had gone, Girardi, who attended the hearing via phone, remained silent.

One of the attorneys representing the crash victims, Jay Edelson, said in court that for the past decade Girardi ran his firm like ‘a Ponzi scheme.’

‘What they do is when money comes in, they use that to pay previous creditors and previous clients, and then they wait till more money comes in. I guess everything just caught up with them,’ Edelson said. One company that loaned Girardi money and is demanding repayment says he funneled more than $20million to Jayne’s entertainment company. The couple pictured during a scene of the Real Housewives of Beverly Hills above

Girardi’s legal team said he was unable to help them understand what became of the money.

Lawyers for Girardi on Monday said they had concerns about his mental competency and asked he undergo a mental health examination.

But lawyers for the plane crash victims’ families called those claims ‘a sham’.

Edelson told the court that as recently as last week Girardi was offering him money ina bid to avoid the contempt hearing.

The judge referred Girardi to the US Attorney’s office for criminal investigation, froze Girardi’s personal assets and those of Girardi Keese.

But that seems to be a step too late. One lawyer told the judge the firm’s operating account had just $15,000.

‘No matter what your personal financial situation is, no matter what kind of pressures you are under, if you touch client money, you are going to be disbarred and quite possibly charged criminally,’ Judge Durkin said, calling it ‘ethics 101.’ The complaint says Tom allegedly embezzled proceeds of the settlements meant for the Illinois-based family members of victims who died in the tragic Lion Air Flight 610 airplane crash that went down into the Java Sea in Indonesia, killing all 189 passengers and crew on board on October 29, 2018. A view of the debris from flight above one day after the crash

‘We screwed up here a little bit. I’m so sorry, this never happened before. Anyway, everything will be smoothed over on Thursday,’ Girardi said in a call to one of the Chicago lawyers in the case.

Now the question remains – where has the money gone?

Some creditors point blame to Jayne, claiming Girardi backed her at singing career and fueled her lavish lifestyle. For years Girardi had a well-respected reputation in the field of law.

He has a record of winning billions of dollars from drug companies, carmakers and polluters on behalf of injured and swindled clients.

His landmark career victory was winning an environment pollution suit on behalf of residents of the Mojave Desert town of Hinkley against Pacific Gas & Electric about tainted drinking water that caused cancer and other illnesses, and resulted in a $333million settlement.

Girardi Keese became a sought after lawfirm with law school grduates pining to work there. Perks included paid luxury cars, a tailor to make custom suits and shirts, a box at the Staples Center and a generous budget for wining and dining potential clients and co-counsel.

According to a Los Angeles Times analysis Girardi, his relatives and employees gave at least $7.5million in political contributions from city council races to presidential campaigns.

He gave to Joe Biden and he and Jayne hosted the president-elect for an event last year at the Jonathan Club, a private downtown social club.

Hints of Girardi and Jayne’s financial collapse first surfaced in 2014 and 2015, according to the Los Angeles Times report. Jayne hasn’t commented on Girardi’s financial woes. After a judge ordered his assets be frozen she posted a photo on Instagram of herself in lingerie with the caption ‘Put me on your wishlist’

After he won a $17million settlement for 138 senior citizen women who claimed they developed cancer after taking hormone replacement therapy, the payout the women received didn’t match the sum they anticipated and they requested an accounting, but the firm refused.

Then in 2014 about two dozen women filed a lawsuit against Girardi and the firm, but the alleging the first misappropriated more than $10million.

Girardi insisted no wrongdoing while ignoring requests for bank records, according to court records.

As that case proceeded to trial, Girardi borrowed $12million at a high interest rate from a Northern California company that specialized in funding lawfirms and $5million from a similar lender in Arizona, according to court papers.

Months later he reached a settlement with the cancer survivors.

As Jayne and her RHOBH castmates took glamorous vacations across the globe, Girardi quietly and struggled to keep his law firm afloat.

Erika and Tom were married in 1999, after meeting while Erika was serving cocktails at Chasen’s in West Hollywood, where Tom was a frequent patron.

Law Finance Group, a northern California lender, had access to some of the firm’s records and noted in a sworn affidavit ‘very substantial sums, demonimated as “loans” were going from firm accounts to EJ Global LLC’, Jayne’s company set up for her artist career. History: The pair were married in 1999, after meeting while Erika was serving cocktails at Chasen’s in West Hollywood, where Tom was a frequent patron. The couple seen here with Jayne’s son Tommy Zizzo

More than $20million was transferred to her account, according to the affidavit.

‘It became frustrating and impossible to get the money,’ CEO Alan Zimmerman said in an intecrview.

After nine months of demanding repayment LFG filed a lawsuit in 2019 allegedly that money loaned to the firm was spent partly on ‘Mr. Girardi’s lavish lifestyle.’

But this only angered the lawyer.

‘Your claim that I used one penny of the funds for my “lifestyle” is total fraud. Four judges called me after they saw the lying materials…. Every one of them stated [the opposing lawyers] better not come in his courtroom,’ he wrote in a letter to LFG’s lawyers.

Girardi managed to settle with the lender as other creditors lined up at LA Count Superior Court.

As the demands for money lined up, staffers at Girardi Keese became nervous as Girardi had complete control of the finances and was secretive about them.

Lawyers started to leave the firm amid the turmoil. The firm that once boasted 30 lawyers is now down to single digits.

Jayne hasn’t commented on Girardi’s financial woes. After a judge ordered his assets be frozen she posted a photo on Instagram of herself in lingerie with the caption ‘Put me on your wishlist.’

Suri Cruise, 14 & Friends Cheer For Joe Biden’s Win On The Streets Of NYC After Historic Election Dionne Warwick Claps Back At Wendy Williams For Talking About Her On Show: Don’t Be ‘Mean To Get Noticed’