Tucker Carlson has weighed in on the row over a ‘misogynistic’ Wall Street Journal op ed mocking Jill Biden’s use of the title ‘doctor’, saying that she held the same honorific as Dr Pepper and accusing her of having ‘status anxiety’.

Carlson used his Fox News show on Monday night to show his support for Joseph Epstein, who wrote Friday’s article.

Carlson said that Jill Biden, who has a PhD from the University of Delaware, was ‘a doctor of education, which means basically nothing.’

He said he was making a ‘true and obvious point’.

‘Jill Biden is not a doctor, no. Maybe in the same sense Dr Pepper is,’ he said.

Cosby, serving a three to ten year sentence for sexual assault, obtained a doctorate in education from the University of Massachusetts Amherst in 1976.

Jill Biden, pictured on Monday night with her husband, was attacked by Tucker Carlson Carlson pointed out that, in 2009, Jill Biden said she wanted to get a PhD because she was tired of letters to ‘Senator and Mrs Biden’.

He accused her of having ‘status anxiety,’ saying she ‘decided to cure that, as so many do in our country, with another pointless title’.

His attack came as The Wall Street Journal’s opinion editor defended the op-ed, as people demand for him to resign, retract the piece and apologize.

Epstein, 83, referred to the future first lady, 69, as ‘kiddo’ in the piece, in which he said she should forego the use of Dr.

‘A wise man once said that no one should call himself ‘Dr.’ unless he has delivered a child. Think about it, Dr. Jill, and forthwith drop the doc,’ Epstein wrote in the piece titled: ‘Is There a Doctor in the White House? Not if You Need an M.D.’

‘In the social sciences and humanities, calling oneself Dr. is thought bush league.’

His words sparked anger on social media, from President-elect Joe Biden’s team, and even from Jill Biden herself, who tweeted: ‘Together, we will build a world where the accomplishments of our daughters will be celebrated, rather than diminished.’

In response to the backlash, WSJ opinion editor, Paul Gigot, wrote an opinion piece on Sunday called ‘The Biden Team Strikes Back.’

He wrote: ‘Why go to such lengths to highlight a single op-ed on a relatively minor issue? My guess is that the Biden team concluded it was a chance to use the big gun of identity politics to send a message to critics as it prepares to take power.’

He added: ‘There’s nothing like playing the race or gender card to stifle criticism. It’s the left’s version of Donald Trump’s ‘enemy of the people’ tweets.’ 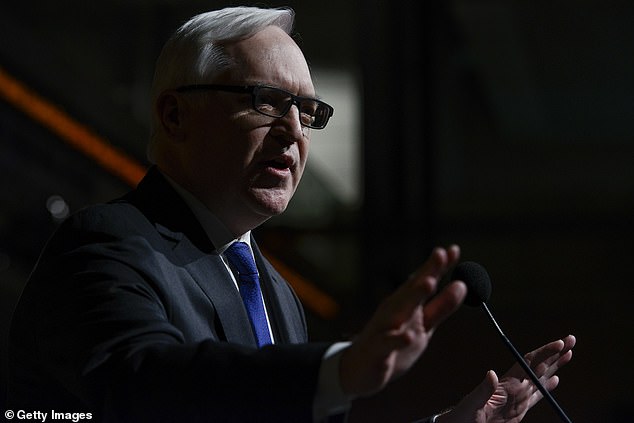 The Wall Street Journal’s opinion editor, Paul Gigot (pictured in 2016) has defended an op-ed piece that called on America’s incoming first lady, Jill Biden, to drop the use of her doctor title 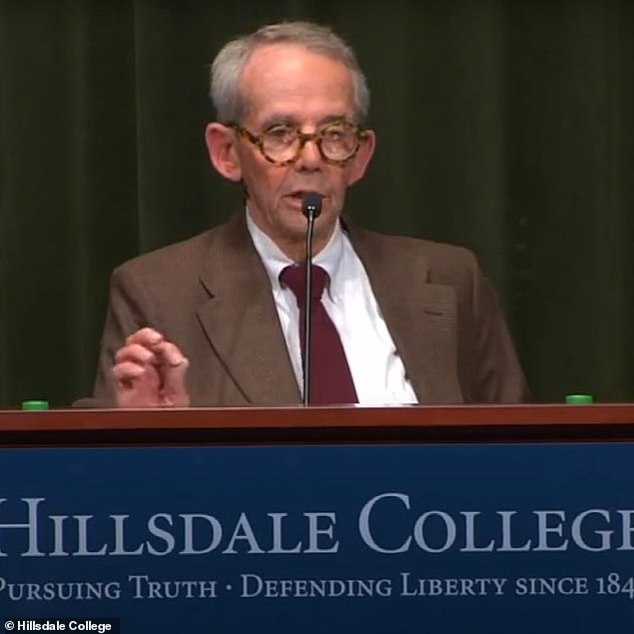 Columnist Joseph Epstein, 83, referred to Dr Biden, 69, as ‘kiddo’ in the piece published Friday in which he said she should forego the use of Dr Epstein’s words sparked anger on social media, from President-elect Joe Biden’s team and even prompted a response from Dr Biden who tweeted: ‘Together, we will build a world where the accomplishments of our daughters will be celebrated, rather than diminished’

Gigot continued: ‘The difference is that when Mr. Trump rants against the press, the press mobilizes in opposition. In this case the Biden team was able to mobilize almost all of the press to join in denouncing Mr. Epstein and the Journal.

He then pointed to a 2009 piece that the Los Angeles Times wrote about Jill Biden’s doctorate.

‘The outrage is overwrought because, whether you agree or disagree, Mr. Epstein’s piece was fair comment. The issue of Jill Biden’s educational honorific isn’t new.

‘As long ago as 2009, the Los Angeles Times devoted a story to the subject. From the piece by Robin Abcarian: “Joe Biden, on the campaign trail, explained that his wife’s desire for the highest degree was in response to what she perceived as her second-class status on their mail.

‘She said, “I was so sick of the mail coming to Sen. and Mrs. Biden. I wanted to get mail addressed to Dr. and Sen. Biden.” That’s the real reason she got her doctorate,’ he said.’

According to Gigot, the backlash has seen several people demand that he retract the piece and ‘apologize personally to Mrs. Biden, ban Mr. Epstein for all time, and resign and think upon my sins’.

Gigot concluded the piece with: ‘If you disagree with Mr. Epstein, fair enough. Write a letter or shout your objections on Twitter. But these pages aren’t going to stop publishing provocative essays merely because they offend the new administration or the political censors in the media and academe.

‘And since it’s a time to heal, we’ll give the Biden crowd a mulligan for their attacks on us.’ In response to the backlash, Gigot, authored another opinion piece on Sunday called ‘The Biden Team Strikes Back.’ He claimed that the Biden administration launched an ‘attack’ on the WSJ, saying: ‘It’s the left’s version of Donald Trump’s ‘enemy of the people’ tweets’ Gigot concluded the piece with: ‘These pages aren’t going to stop publishing provocative essays merely because they offend the new administration or the political censors in the media and academe’ Dr Biden earned four degrees while raising her family. She has a bachelor’s degree and two master’s degrees, and earned a doctorate of education from the University of Delaware in 2007. She is pictured with Joe and their children

Gigot’s response came as several people took to Twitter to call out the Wall Street Journal for allowing the ‘misogynistic’ piece to be published.

Former White House photographer Pete Souza shared an image of Dr Biden on a golf buggy, calling the piece ‘ridiculous and misogynistic’ and adding: ‘The Dr. is on her way!⁣’

LaRosa called the piece a ‘disgusting and sexist attack’ and said the paper should be ’embarrassed’ to print it. He added: ‘If you had any respect for women at all you would remove this repugnant display of chauvinism from your paper and apologize to her.’

And Harris’ husband Emhoff said: ‘This story would never have been written about a man.’

Dr Martin Luther King’s daughter Bernice tweeted: ‘Dear @DrBiden: My father was a non-medical doctor. And his work benefited humanity greatly. Yours does, too.’

The View host Meghan McCain said: ‘I am so sick of the way accomplished, educated, successful women like @DrBiden are talked about in the media by misogynistic men. BEYOND SO SICK OF IT.’

Singer Pink called the article ‘bulls***’ and actress Debra Messing tweeted: ‘What a disgusting display of misogyny. Your hatred for women is showing.’

And former presidential candidate Pete Buttigieg’s husband Chasten said: ‘The author could’ve used fewer words to just say ‘ya know in my day we didn’t have to respect women’.’ The Wall Street Journal op-ed has sparked fury after it argued Jill Biden’s doctor title ‘sounds and feels fraudulent, not to say a touch comic’. Kamala Harris’ husband Doug Emhoff said: ‘This story would never have been written about a man’ Epstein also acknowledges that he ‘only has a B.A. in absentia from the University of Chicago’, adding: ‘I taught at Northwestern University for 30 years without a doctorate or any advanced degree.’

But Northwestern sought to distance themselves from Epstein, saying in a statement it disagreed with his ‘misogynistic views’, and adding: ‘Joseph Epstein was never a tenured professor at Northwestern and has not been a lecturer here since 2002.’

Epstein had been listed as an ’emeritus lecturer of English’ on the school’s website earlier Saturday, but the page had vanished later in the day.

‘While we firmly support academic freedom and freedom of expression, we do not agree with Mr Epstein’s opinion and believe the designation of doctor is well deserved by anyone who has earned a Ph.D., an Ed.D. or an M.D.,’ the statement reads.

‘The Department rejects this opinion as well as the diminishment of anyone’s duly-earned degrees in any field, from any university,’ the statement said.

In 1970 Epstein was denounced after repeatedly using the N-word and writing that the LGBTQ community was ‘afflicted without apparent cure’ in an essay for Harper’s Magazine, Newsweek reported. Jill Biden gives the commencement speech at Broward College on May 4, 2012, in Fort Lauderdale, Florida

Jill has been married to the president elect for 43 years, becoming a stepmother to Beau and Hunter Biden, his two sons from his first marriage, after their mother and baby sister died in a car accident in 1972.

She has earned four degrees while raising her family.

She has a bachelor’s degree and two master’s degrees, and earned a doctorate of education from the University of Delaware in 2007.

During Joe Biden’s eight years serving as vice president she was a full-time English professor at Northern Virginia Community College.

Prior to moving to Washington, DC, she taught at a community college in Delaware, at a public high school and at a psychiatric hospital for adolescents.

Writing in her memoir, she wrote: ‘Being a teacher is not what I do but who I am.’

In April 2019, she took a break from teaching for the first time since 1981 in order to help her husband on the campaign trail.

One of her most high profile appearances during the campaign came when she delivered a rousing speech from a classroom at the virtual Democratic Convention. Sharis Cid boasts how well he gets along with Arturo Peniche’s wife: “For more days like this” | The NY Journal