It was predictable: Pfizer’s new vaccine approved by the Food and Drug Administration (FDA) and to start to be applied starting this Monday in New York, it is a hopeful shield to end the devastating pandemic that is holding New Yorkers on the ropes. But this immunization crusade, of course, faces a very stony road.

On the one hand, some sectors they are anxious waiting for the antidote to reach the population not linked to the health sector faster. Others feel doubts and panic about inoculating a drug just “out of the oven.” And another group completely refuses to agree to this immunization.

On the streets of the Big Apple, possibly the new vaccine is one of the topics that is talked about loudest. More in this moment in which the second wave of infections continues to alarm the authorities.

With 71 years old and absolutely healthy, the taxi driver Dominican Andrés Pérez it feels like an “oak” to continue working for many more years, in these difficult times on the city streets. Now that the first round of vaccines has the green light for specific groups in the hospital area, the islander it is not clear how long you will have to wait to be protected against the virus.

“I’m ready to put it on. I am not afraid of side effects. I don’t think we are laboratory mice because of that. The coronavirus kills. And the scientific authorities in this country, They have proven for years that they are not crazy”, Recounts who was locked up between April and May when the virus raged in New York City.

Andrés, in accordance with the protocol imposed by the Federal Government, who purchase, distribute and establish the priorities of the immunization route, it is very far on the list of the first groups to receive the new Pfizer vaccine, which only got the first approval by the FDA last Thursday. Everything indicates that the worker behind the wheel you will have to wait at least a few months.

“I am on the street working. And I’m moving in my car who come and go to the hospital because they feel bad. And now, to those who need a transportation service because they qualify to be vaccinated, ”says the islander who, like hundreds of thousands, trust to be at least in phase four to be immunized, that is, in the group of essential workers outside the health sector.

The finding of the approval and provision of a vaccine that takes a very firm step in the fight against the coronavirus in New York, after 10 months of death, pain and economic devastationIn theory it should be the beginning of a powerful step towards a return to normality. But no! This Monday, December 14, when the button of your application is turned on, thousands of new challenges arise to deal with the pandemic that has claimed the lives of more than 24,000 souls in the Big Apple.

According to the advisory committee on immunization practices of the Centers for Disease Control and Prevention (DCD), vaccines are prioritized for health workers, residents and staff of nursing homes in the first phase.

To the date there is no precision on how many units of the new drug they will be available to apply to the “non-priority” population in the coming months. The first rounds to arrive this month of Pfizer and Moderna will add more than 500,000 doses.

Spokespersons for the New York City Department of Health and Mental Hygiene (DOHMH) have reiterated that we are at the forefront of a strategy for which “the City is prepared”, but that could take months because there is no knowledge of actual inventories of pharmaceuticals that are just being approved by the Federal Government.

Some preliminary prototypes suggest that in the next summer the 70% immunization citywide.

I’m not going to get vaccinated!

Regardless of what happens and the accessibility of the new product against COVID-19, the Dominican Eduardo Sánchez, 43, he has no intention of “getting vaccinated”.

“This is just being tested. The collateral effects will be known in the coming years. The vaccine is in phase two. Your you would be putting an entire population at risk. A vaccine to be approved has to be in phase four. Who assures me that if they apply it to me, nothing will happen to me? ”He wondered.

Sánchez comments that there is a history of other vaccines developed in the past “that have caused the death of groups of prisoners and even they have caused sterilization in women ”.

The islander residing in Upper Manhattan is in the radical group of those who are “Pretty sure” that the two doses of the drug will not be applied.

A survey conducted by Siena College concluded in early November that 69% of New Yorkers say they will “definitely or likely” receive an FDA-approved coronavirus vaccine.

A quarter part of New Yorkers surveyed say they “probably” will not get the vaccine or “definitely” they are not confident in getting immunized.

There are other signs of resistance to being part of this immunization program in strategic unions that top the priority list.

A query shared by local media indicates that a quarter of New York firefighters responded to a survey and the 55% of them specified that they have no intentions to be inoculated, at least immediately.

An investigation by the new collective ‘COVID Collaborative’ that outlined the opinion of different ethnic groups about the new vaccines, documents a “disproportionate aversion ”among black people in the country to be vaccinated against the new coronavirus.

Less than half of African American adults, the 48%, says they would probably or definitely get a vaccine if it were available for free, including just one 18 percent that it would definitely be vaccinated with the drugs that are just being launched on the market.

Between The Latino adults interviewed had a very different reaction: 66% are much more likely to be vaccinated, including 31% who said they “definitely” will.

Although both groups have comparatively high risks of infection, only the 33% of black adults believes it is “at least somewhat likely” that they will contract the coronavirus, compared to 52% of Latino adults.

All recent polls locate Hispanic communities as more likely to accept being part of immunization plans, if contrasted with the opinion of African Americans.

“I prefer to give more time”

Also, the Mexican merchant Juan González He argues that the new drug is already being applied in other countries and “everything is going well”, it also generates more confidence than doctors, scientists and even presidents have said that they will apply it. He finds no reason not to.

“When it is available to me I will have no doubts. I have close people who have died from that virus. In my very personal opinion I think that if we have the opportunity to protect ourselves and be calmer, it is much better. We grew up with vaccines. They have been shown to work, ”said the young man born in Puebla and living in the Big Apple for 20 years.

In Corona, in queens, the Latino-majority neighborhood that became the ‘epicenter of the epicenter’ of the pandemic in the Big Apple, the Colombian nurse Rocío Sarmiento, 50 years old, comments that it is understandable that many people do not feel confident with such a new “remedy”.

“When the months go by and you have thousands of people in the world immunized and protected, if everything goes well, we will see that people will feel more comfortable. Always new in this case applied to health generates a bit of resistance. I’m still thinking about it. I prefer to give more time ”, commented the health worker.

In the opinion of the nursing professional with the vaccine, something similar to the 2020 Census could happen, that many undocumented immigrants feel intimidated that at the time of applying the doses have to share personal information.

“However, I can tell you that Latinos generally comply with their vaccination records, culturally we have no problems with these drugs,” he concluded.

The New York Health authorities They are clear that one of the main challenges to achieve effective immunization in the coming months, in addition to having millions of doses of the product developed by the laboratories, is to gain the trust of some poor neighborhoods, where more than 50% of the population does not see this process favorably.

“For decades, racist policies and unfair practices have left communities of color and low-income neighborhoods with limited resources and opportunities. Now with this new stage of immunization, that they trust us will be vital ”, reasoned the Dr. Torian Easterling, first deputy commissioner of Health and director of equity of the City.

The Mayor’s Office announced that they are partnering with 200 community organizations to reach out to neighborhoods and gain confidence in rounds of inoculation against the coronavirus that is to come.

It is not the first time that New York has faced certain resistance to vaccination processes.

In 2018 with the measles outbreak ultra orthodox Jewish communities they had to be forced by state legislation to apply the dose against that infection.

Also a proposal that arose in the State Assembly and Senate, which would consider it mandatory by law, to apply the Human Papilloma Virus (HPV) vaccine to children born after January 1, 2009 and who are in the New York public education system, generated a ‘front of parents’ across the state, who strongly oppose what they describe as an “imposition of immunization against sexually transmitted disease.”

This new chapter in the war against the pandemic is just beginning.

The doses that come to NY 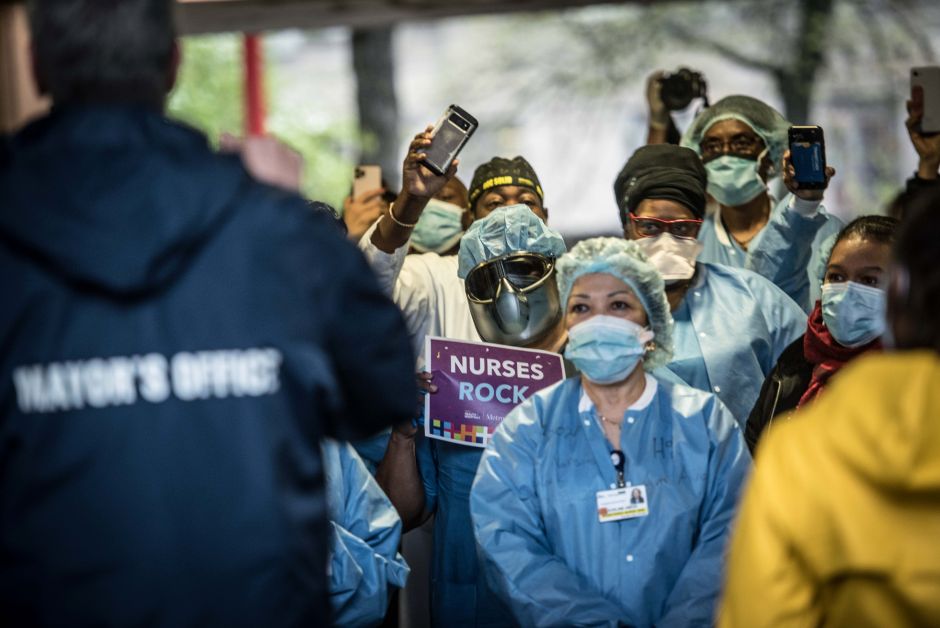 Missouri toddler, 3, had a stroke after COVID-19 diagnosis