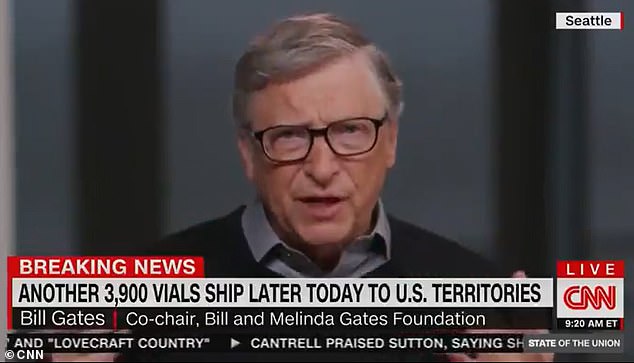 Bill Gates says he expects that coronavirus-related lockdowns could drag on into 2022 with restaurants closing their doors for the next six months.

The billionaire Microsoft founder offered his predictions during an interview with CNN’s Jake Tapper on Sunday as the US set new records for new cases, hospitalizations and deaths over a seven-day period.

Asked how bad he thinks the COVID-19 crisis will get in the next few months before vaccines become widely available, Gates said: ‘Well, sadly, the next four to six months could be the worst of the epidemic.

‘Forecast shows over 200,000 additional deaths. If we would follow the rules in  terms of wearing masks and not mixing, we could avoid a large percentage of those deaths. So in the near term, it’s bad news.’

He went on to signal his support for drastic restrictions – including California Governor Gavin Newsom’s latest stay-at-home order affecting more than 75 percent of the state.

‘Well certainly mask-wearing has essentially no downsides,’ Gates said. ‘Bars and restaurants in most of the country will be closed as we go into this wave, and I think sadly that’s appropriate.’

‘You don’t want somebody you love to be the last to die of coronavirus,’ he added.

Gates noted that deciding whether to keep schools open is more ‘complicated’ than other businesses because the benefits of in-person learning are high while transmission rates among children are low.

‘Tradeoffs will have to be made, but the next four to six months really call on us to do our best because we can see that this will end,’ he said.

Tapper then probed: ‘When do you think life will fully return to what we thought of as normal back in January? No masks, no social distancing, no other protective measures necessary.’

Gates replied: ‘Certainly, by the summer we will be way closer to normal than we are now – but even through early 2022, unless we help other countries get rid of this disease and we get high vaccinations rates in our country, the risk of reintroduction will be there.

‘And, of course, the global economy will be slowed down, which hurts America economically in a pretty dramatic way.

‘So we will have, starting in the summer, about nine months where a few things like big public gatherings will still be restricted.

‘But we can see now that somewhere between 12 to 18 months, we have a chance, if we manage it well, to get back to normal.’ Gates signaled his support for drastic restrictions – including California Governor Gavin Newsom’s latest stay-at-home order – saying: ‘Bars and restaurants in most of the country will be closed as we go into this wave [of infections], and I think sadly that’s appropriate.’ Pictured: City workers enforce mask requirements on a pier in Manhattan Beach, California on Saturday The US set new records for cases, hospitalizations and deaths over a seven-day period Sunday At another point in the interview Tapper mentioned how the Bill & Melinda Gates Foundation recently announced a new $250million pledge to fight the pandemic, on top of the $1billion it had already committed.

Gates said that funding would be focused on creating a vaccines for use not just in the US but around the world.

He also addressed rampant online conspiracy theories that his foundation was working with Dr Anthony Fauci, director of the NIH, to inject microchips into people with the vaccine – saying that such rumors ‘surprised’ him.

‘You know, I’m not even quite sure how to react,’ he said. ‘Dr Fauci and I believe in vaccines. Vaccines have saved millions of lives. That is what our foundation is all about and so our expertise was valuable here in getting the scale up of those things.

‘You’ve got to be willing to speak out publicly, even if it’s not always well understood.

‘I do worry will this make people not want to take the vaccine or not believe, you know, in polio eradication or other causes that I think are valuable.’ 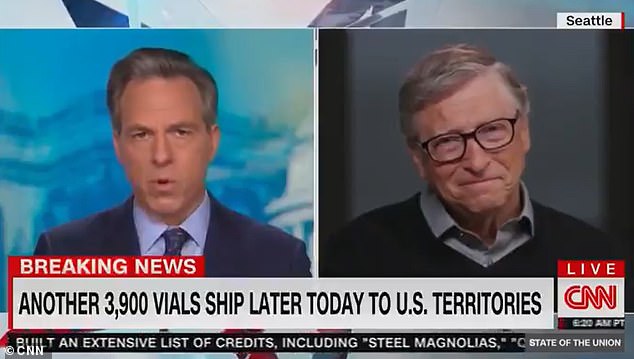 Tapper mentioned how the Bill & Melinda Gates Foundation recently announced a new $250million pledge to fight the pandemic, on top of the $1billion it had already committed. Gates said that funding would be focused on vaccine research

Tapper then cited a new poll from Pew Research Center which showed that only 60 percent of Americans intend to get vaccinated, asking: ‘How worried are you about the reluctance of Americans to take a vaccine, particularly among minority communities?’

‘I think we have a real communications challenge that you’ve got to find out who do people trust, make sure they have got the data,’ Gates replied.

‘I hope as people see it – this  vaccine rolled out and reducing the death rate, reducing transmission to people you care about, that that 60 percent number will go up.

‘The track record will be  developed and I think we will get over the 70 percent that should reduce the transmission dramatically.’

Gates said he intends to join several other American leaders – including President-elect Joe Biden and former Presidents Barack Obama, George W Bush and Bill Clinton – in taking the vaccine publicly in an effort to help convince others that it’s safe.

‘When my turn comes up, I will visibly take the vaccine because I think that it’s a benefit to all people to not be transmitting,’ he said.

Gates said he’s spoken to Biden about the incoming administration’s plans to combat the pandemic and that he is encouraged by what he’s seen.

‘I’m pleased with the people and the priority that President-elect Biden and his team are bringing to bear on this problem,’ he said. 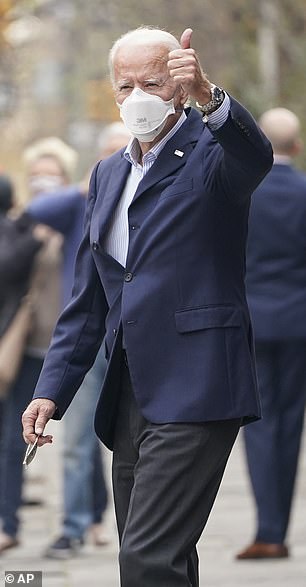 ‘Biden is doing his best to retain Francis Collins and Tony Fauci and add them to that strong group of people. These are people who are willing to admit when things aren’t going well and deliver top messages, particularly about the next four to six months.

‘I do think the US will not be one of the worst performers as the team comes in to office.’

Gates took a few small shots at Biden’s predecessor Donald Trump – saying that his plan to prioritize vaccinations for Americans is ‘selfish’ and suggesting that the Trump administration did not play a substantial role in getting vaccines rolled out quickly.

But, he said that Trump’s response to the virus ‘could have been worse’.

‘[Trump] could have fired Dr Fauci. He could have kept Scott Atlas on longer. You know, we will do the postmortem when it’s over.

‘We should all look at what we will have learned from this epidemic because there will be another epidemic coming and whatever that administration is being smart about getting the testing out fast, allowing the CDC, who are the experts, to give the message to the public, not being afraid of bad news, so that we get people ready.

‘It’s pretty clear we  are going to be smarter next time.’

Tapper concluded the interview by asking: ‘How do you think history will ultimately judge the US response to the pandemic?’

‘Well, the US would have been expected to be the best,’ Gates said. ‘Sadly, before the epidemic, in the first two or three months of the epidemic, we didn’t get on top of it like many countries did.

‘Figuring out where we need to change things, these postmortems the next year, will guide us, but it’s a tragedy we weren’t able to respond like we could have.’