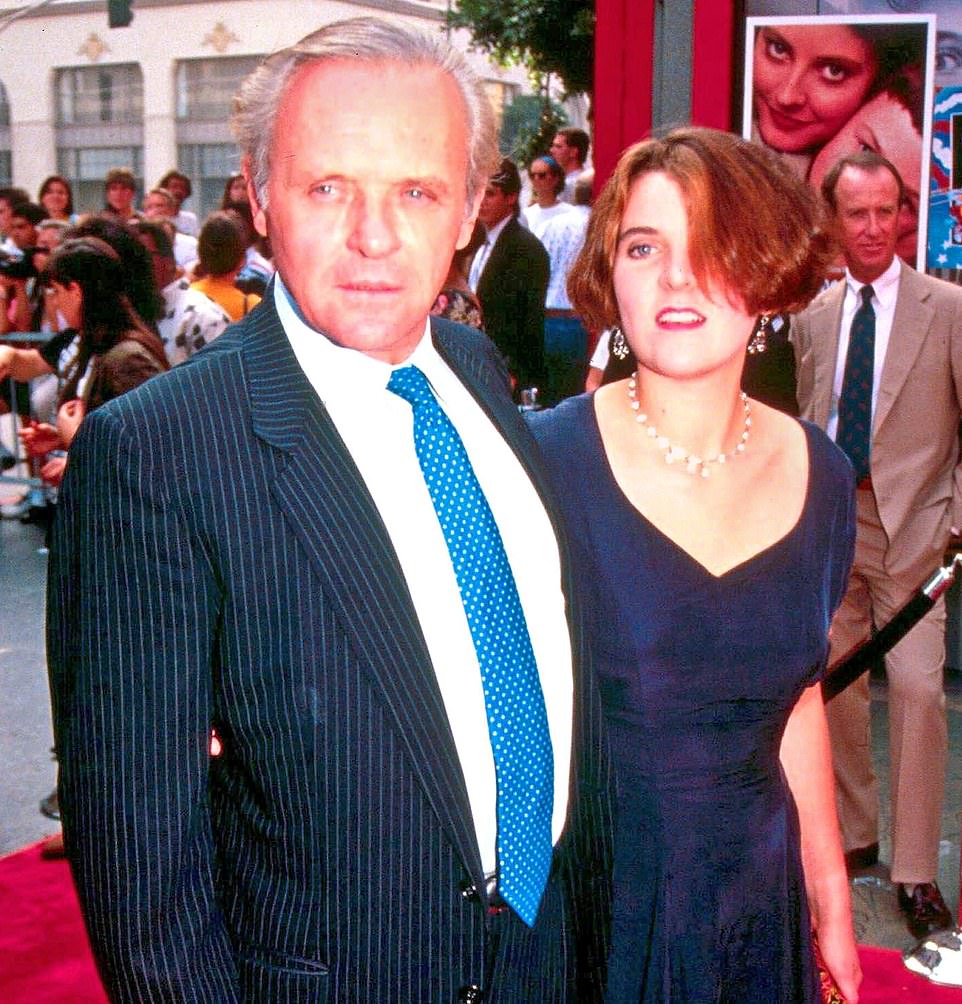 It has been described as a tour-de-force from an actor at the height of his powers. Playing a man whose brain is slowly ravaged by dementia in his latest film, The Father, Sir Anthony Hopkins is set to cement his position as Britain’s greatest living movie star and scoop a second Oscar in the process.

Hopkins, 82, who won his first Academy Award for his chilling portrayal of serial killer Hannibal Lecter in The Silence Of The Lambs, plays opposite fellow Oscar-winner Olivia Colman in the £18 million drama, which critics have likened to a horror film for its compelling depiction of dementia and the toll it takes.

Hollywood ‘bible’ Variety calls Hopkins ‘brilliant and mercurial’ as the movie unfolds through the confused and fearful eyes of a man who rails against his daughter’s attempts to put him in a care home.

Hopkins has often spoken about drawing on his own turbulent family history to infuse his best-known roles, including the inwardly raging butler in The Remains Of The Day and last year’s Oscar-nominated turn as conservative Pope Benedict XVI in The Two Popes, but this performance as an embattled father raging against his offspring is, perhaps, his most poignant.

Distant: Anthony Hopkins and his daughter Abigail, who is now 52, in 1991. The actor has often spoken about drawing on his own turbulent family history to infuse his best-known roles

There has certainly been no shortage of personal drama to draw upon for, in real life, Hopkins has been estranged from his own daughter Abigail, a 52-year-old singer and acting coach, for more than two decades.

It is a subject so sensitive, Hopkins refuses to discuss it with even his closest friends. And an attempt to explain the situation publicly two years ago backfired so badly he has vowed never to talk about her in interviews again.

‘Anyone in Tony’s orbit knows to never mention the subject,’ a friend told The Mail on Sunday last night. ‘Tony was plagued by demons for years but he’s in a very good place now and this is not a wound he wants to reopen, particularly not in public.’

The existence of a daughter will doubtless come as a surprise to most of the actor’s fans, including his 2.4 million Instagram followers who have delighted in Hopkins’s uplifting and jaunty lockdown antics, which include him serenading his cat Niblo while playing a grand piano, impromptu Shakespeare recitals and a wardrobe of increasingly garish Hawaiian shirts.

He has even found time to create an eponymous line of unisex fragrances and candles, all proceeds going to his favourite children’s charity.

Yet while Hopkins publicly claims he is ‘happier than I’ve been in years’ and seems to be positively loving lockdown in his £15 million mansion overlooking the ocean in Pacific Palisades in Los Angeles alongside his Colombian third wife Stella, the estrangement from his daughter is now so profound he does not know where she lives or even if she has children.

Talking about the rift in a disastrous Radio Times interview two years ago, the actor gave a seemingly callous answer when asked whether or not he was a grandfather.

He said: ‘I don’t have any idea. People break up. Families split and, you know, “Get on with your life”. People make choices. Hopkins and his daughter Abigail in the 1970s. The existence of a daughter will doubtless come as a surprise to most of the actor’s fans, including his 2.4 million Instagram followers

When told his remarks sounded cold he replied: ‘Well, it is cold. Because life is cold.’

One critic who saw The Father when it debuted at the Sundance Film Festival in January said scenes between Hopkins’s belligerent father and on-screen daughter Colman are so powerful audiences were left ‘shaken’.

‘When the lights came back up at the end of the screening, people were ashen-faced. One woman was sobbing.

‘It’s the most powerful performance by an actor in the last decade and it’s almost inconceivable anyone will beat Tony to the Oscar.

‘You watch his performance and that rage, that pain, has to be coming from somewhere.’

Is that ‘somewhere’ Hopkins’s tortured relationship with his only child? Or perhaps it truly started in the former steel town of Port Talbot in South Wales, where Hopkins’s battle with the world first commenced more than 80 years ago.

Born to Richard, a baker, and mother Muriel, the actor struggled to bond with a father who once told him: ‘You have a big head like Dumbo. Pity there’s nothing inside it.’ In contrast, he remained devoted to his mother until her death in 2003, even moving her to America to live with him.

‘I was quiet because I was such a dummy,’ Hopkins said. ‘My father was a very meat-and-potatoes man. He wasn’t a cruel man. And I loved him. But he was a pretty tough character. His own father was even tougher, one of those Victorians, hard as iron. But my dad was tough enough.

‘It’s in my DNA. I think I inherited the toughness of my father. I’ve mellowed over the years but I know what that’s about, the harshness and the hardness.

‘I’ve got it in me somewhere. I don’t like small talk. I’m not a very cuddly, touchy-feely person. As a child, I was very isolated.

‘Ask nothing, expect nothing. That’s my creed.’

A chance encounter with Port Talbot’s only other famous actor, Richard Burton, inspired Hopkins to head to drama school and launch his career in repertory theatre, where he met his first wife, actress Petronella Barker, Abigail’s mother. Tour-de-force: Hopkins with Olivia Colman in the new film The Father. This performance as an embattled father raging against his offspring is, perhaps, his most poignant

The pair wed in 1966 and Hopkins got his big break the following year when he was spotted by Laurence Olivier and joined the National Theatre in London.

According to biographer Quentin Falk, Hopkins began spending long periods of time away from home and increasingly turned to alcohol to numb the pain of a marriage that was now crumbling under the pressure.

The relationship was all but over by the time Petronella announced she was pregnant with Abigail – who was born in 1969 – claims Falk, and the news he was to become a father ‘made him so tense he was like a bottle of soda that was about to pop’.

The following year, Hopkins met his second wife Jenni Lynton, a secretary, when she was sent to collect him from Heathrow Airport after he got so drunk he missed his flight.

The longtime Hopkins friend said: ‘The reality is Tony walked out of his first marriage when Abigail was 14 months old. Then his career started to take off. When she was a toddler, Tony and his second wife moved to Los Angeles so he could chase his Hollywood dream.

Tony will be the first to admit, he selfishly put himself first

‘And, yes, Tony will be the first to admit, he selfishly put himself first. He was drinking, had a new wife and was focused on becoming a movie star. All of those things led to him not being the dad Abigail wished for and, quite frankly, deserved.’

In her only comments about the rift, Abigail said she was ‘a solitary child’ who comforted herself with music, a passion she inherited from her father. The lack of closeness – both geographical and physical – caused a ‘breakdown’. ‘I bottled up so much emotion in my childhood it caused my mind to go. I came very close to killing myself,’ she said.

‘It was the worst time I can remember. I totally abused my mind and body. The root cause was the fact that my father and I had an intermittent relationship when I was young. I was angry and there was a lot of grieving going on.’

Hopkins quit drinking shortly after Christmas 1975 after waking up in a hotel room in Arizona surrounded by empty tequila bottles with no idea how he had ended up hundreds of miles from home.

Newly sober, he tried to make amends with his child.

‘They had a sporadic relationship,’ the friend told The Mail on Sunday. ‘But it was very much on and off and then it was more off than on until one day it was totally off. Hopkins pictured with Jodie Foster in The Silence of the Lambs, for which he won his first Academy Award for his chilling portrayal of serial killer Hannibal Lecter

In 1990, 21-year-old Abigail reached out to her father after deciding to become an actress herself. Hopkins described their reunion as ‘earth-shattering’ and gave her minor roles in two of his films, Shadowlands and The Remains Of The Day.

The friend said: ‘Things were OK for a while. And then they weren’t. Tony never spoke about what caused them to become estranged again but by the early 2000s it was obvious the relationship was over.’

Hopkins, who by this time had become a US citizen, divorced Jenni and married his third wife Stella, 18 years his junior, whom he met when he visited her antiques store. By all accounts, she has been a stabilising influence.

‘She’s great for Tony. Age has mellowed him. He’s in a good place. He’s 82 and doing his best work. For the first time he seems comfortable in his own skin. He’s in great physical shape.

‘Stella has him eating organic food, juicing and exercising in their pool. The only thing which isn’t perfect is the relationship with his daughter.’

Stella is said to have encouraged her husband to heal the rift – but this is something he has apparently refused or been unable to do. Today, Abigail lives in London, does not have children and, save for his surname, appears to have completely erased her father from her life. While most celebrity offspring – particularly one who works in the world of entertainment – might seek to boast about their A-list connections, there is not a single mention of Hopkins on her website.

A source close to Abigail said she had been ‘deeply hurt’ by her father’s dismissive remarks about her, adding: ‘Her relationship with him, or lack of it, has had a big impact on her life.

‘Every time she has tried to move on she sees him on film posters, on TV, on the sides of buses. He’s not like any other father.’

In interviews to promote The Father, which opens in the UK next month, Hopkins admitted the role forced him to face up to his own mortality. ‘It [death] is inevitable and your life is terminal,’ he said.

‘It’s a terminal condition and you’re not going to get off the planet alive, and with that reality there’s a tremendous freedom. There’s a wonderful peacefulness about it.’

Will the newly mellow Hopkins be ready, finally, to embrace the one role which has always eluded him – that of father?