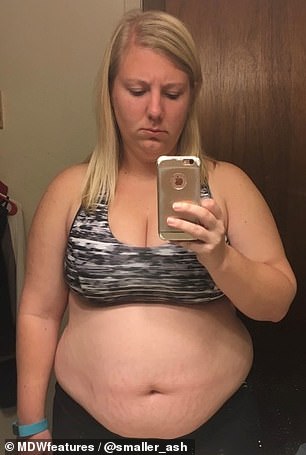 An obese woman who used to gorge herself on donuts and tacos for breakfast has revealed how she transformed her body and her life by undergoing gastric surgery that left her unable to eat more than a cup of food per meal.

Special education teacher Ashlee Coleman, 31, from Houston, Texas, struggled with her weight from a young age, and recalls people often telling her: ‘You’re pretty… for a big girl.’

Ashlee found comfort in food from a young age and for a time, felt indifferent to her appearance, with many telling her that she was just ‘big boned’. However, when she turned 18, she became tired of being known as the ‘big girl’ in school – and started trying to transform her body once and for all. 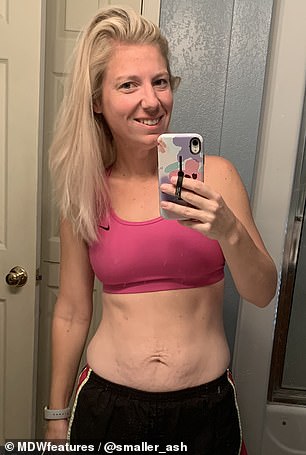 Transformed: Teacher Ashlee Coleman, 31, has showed off her incredible transformation after undergoing weight loss surgery that left her unable to eat more than a cup of food per meal Big step: Ashlee, from Houston, Texas, struggled with her weight from a young age, and her attempts to diet failed she decided it was time for a more extreme option Moving on: The mother-of-two reached breaking point when her weight soared to 215lbs and she was struggling to keep up with her two sons, so she underwent a vertical gastric sleeve 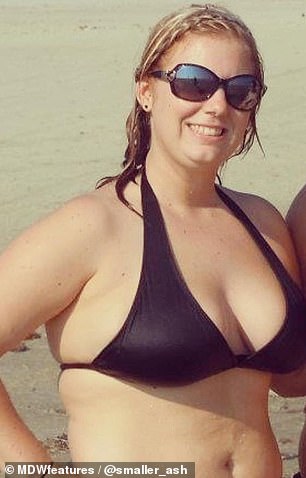 Then and now: Before her surgery, Ashlee was eating 3,000 calories a day, however the gastric sleeve left her unable to eat more than a cup of food per meal – and she now eats 1,200 calories

When Ashlee began her first diet in 2007, she weighed 210lbs and wore a dress size 18. In just five months, she dropped down to 170lbs by cutting out carbs, curbing her portion sizes, and taking up exercise.

Ashlee managed to keep the weight off for several years but over time, the diet began to falter. The toll of losing and gaining weight in a vicious cycle proved too much and by 2019, Ashlee had ballooned to 215lbs.

Dieting had drained Ashlee of energy both physically and mentally but she also began to find that due to her weight, she struggled to keep up with her children, Liam, seven, and Declan, two.

Wanting to have the energy to play with them, Ashlee set out to find a surgeon who could perform vertical gastric sleeve surgery.

In September 2019, Ashlee attended her consultation and the surgery was performed just two weeks later. The size of Ashlee’s stomach was cut by around 80 per cent meaning she would have to consume smaller portion sizes. She only consumes one cup-full of food in any one sitting.

The surgery has been life changing for Ashlee with her children and partner, Calan, 34, happy to see the young mom running around and playing. After 10-months, Ashlee now weighs 148lbs and wears a size 8.

She’s even been mistaken for her 27-year-old sister and is often complimented on her style – something she was so insecure about prior to her weight loss.

‘I just loved food. It was a comfort for me as long as I can remember,’ Ashlee said.

‘I celebrated with it. I was sad with it. I basically ate my emotions no matter what they were. I didn’t hate myself but I didn’t love my body either.

Crutch: Ashlee admits that she used to use food for comfort, and that caused her weight to soar over the years, with the mom-of-two binging on fast food, sweets, and frozen meals

Unhealthy: Her diet before her surgery consisted of donuts and tacos for breakfast, frozen meals for lunch, and fast food for dinner

Overhaul: Now, Ashlee eats health meals like oatmeal and grilled chicken, and she has also implemented a regular workout regimen that has helped her to keep the weight off

‘I was definitely overweight as a child. People would say I was ‘big boned.’

‘If I had a dime for every time I heard ‘you’re pretty for a big girl’ as I got older, I’d be rich.

‘I learned to just shrug it off but it hurt my feelings deep down. I just wanted someone to say ‘you’re pretty’ and leave out the ‘big girl’ part.

‘When I was a senior in high school, I dieted with a friend of mine and it was amazing. I kept it off for a few years.

‘Eventually, I gained it all back plus some. It was the struggle of gaining and losing in a cycle and I struggled to keep up with it.

‘It got to a point where my weight meant I could no longer run around and play with my kids.

‘I figured I was still young and was done having kids so it was the perfect time to do some research into vertical gastric sleeve surgery. Some of my co-workers had it done.

‘I went to my initial consultation and got approved and then I met with a nutritionist.

‘The process was fairly quick – around two weeks – as I paid for it myself rather than depended on my insurance.

‘At first after the surgery, I was only able to eat a quarter of a cup at a time but now I can eat a full cup.

‘I always prioritize the most nutritious foods as I get full so quickly.’

How Ashlee transformed her diet Happy: ‘The surgery completely changed my life for the better,’ Ashlee said. ‘My marriage is stronger than ever and my kids have a mom who doesn’t sit on the sidelines anymore’ Priorities: Ashlee says she has now learned to nourish her body with healthy foods, rather than gorging on unhealthy dishes that contained nothing nutritious

Prior to her weight loss, Ashlee consumed around 3,000 calories a day and typically ate doughnuts or a taco for breakfast, a frozen meal for lunch, and fast food for dinner.

Ashlee now consumes up to 1,200 calories a day including oatmeal for breakfast, grilled chicken for lunch, and a salad or stir fry for dinner. Ashlee now also runs or walks up to five miles several days a week.

‘The surgery completely changed my life for the better,’ Ashlee said.

‘My marriage is stronger than ever and my kids have a mom who doesn’t sit on the sidelines anymore.

‘I have a better relationship with food because I’ve learned to feed my body what it needs not what I want – although I have my favorite treats from time to time.

‘I literally mourned food after the surgery but it was the tool I needed to force me to find the person I was meant to me.

‘People mistake me for my younger sister now and most people comment about how good or happy I look.

‘A co-worker complimented my dress sense which is amazing because I’d never felt comfortable being ‘trendy’ prior to the surgery.

‘With dieting, it’s important to start small. Don’t try all the fancy ‘diet’ foods. Basic things like protein and veggies are good.

‘Soon, it becomes a routine and once you’re comfortable with this, you can add in exercise.

‘For me, that was long distance running. Now, my skin is clearer, I’m in shape, and I’m in love with who I’m becoming.’ Indus Valley Civilisation was wiped out by climate change 3,300 years ago