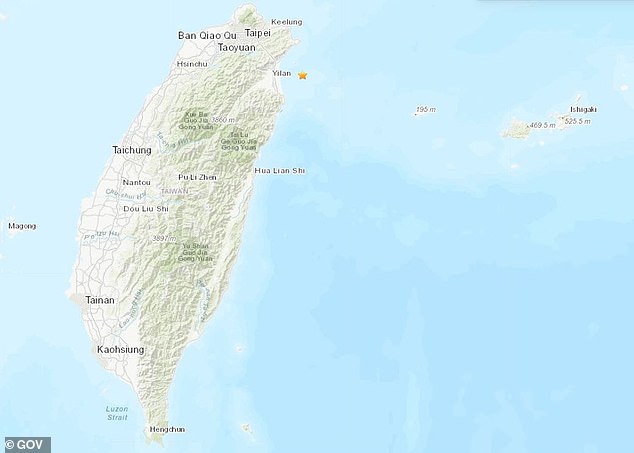 By Chris Jewers For Mailonline

An powerful earthquake of magnitude 6.1 struck the Taiwan region on Thursday.

The quake was centred off Taiwan’s northeastern coast with a depth of 77 kilometres (48 miles), the island’s Central Weather Bureau said.

The epicentre was around 37 miles (60 km) south-east of the country’s capital of Taipei, which has a population of 2.6 million.

Buildings shook briefly in the capital Taipei but there were no immediate reports of injuries or significant damage.

The Taipei city government said there were scattered reports of light damage, but that the subway system was operating as normal. Buildings shook in the capital for around 30 seconds.

The high-speed railway line between northern and southern Taiwan was stopped briefly, before resuming normal service, the Transport Ministry said.

The quake’s intensity registered a 4 in Taipei and most of the country.

Taiwan, a self-ruled island that China considers its own, lies near the junction of two tectonic plates – known as the Pacific Ring of Fire – and is prone to earthquakes.

More than 100 people were killed in a quake in southern Taiwan in 2016, and some Taiwanese remain scarred by a 7.3 magnitude quake that killed more than 2,000 people in 1999.

The self-governing island lies 100 miles (160 kilometers) off the coast of mainland China.

The epicentre of the 6.1 magnitude was around 37 miles (60 km) south-east of the country’s capital of Taipei, which has a population of 2.6 million (star denotes location of earthquake)

The fascinating stories behind the watches of iconic people throughout history