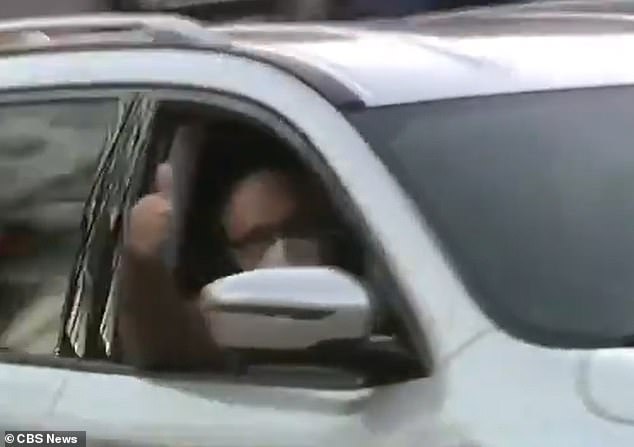 Rudy Giuliani has left hospital following his COVID-19 diagnosis, amid criticism from the medical community that Donald Trump and his pals are getting preferential medical treatment in the nation’s fight against the virus.

Trump’s personal attorney flashed a thumbs-up to reporters and waved as he was driven out of Georgetown University Hospital around 5 p.m. Wednesday, four days after he tested positive.

Giuliani, who is 76 putting him in a high-risk category, was admitted to the medical center Sunday where he was treated with ‘miracle’ antibody drugs from Eli Lilly and Regeneron.

Now, doctors are voicing outrage that Trump’s inner circle are able to get the drugs with ease – which are not available to most of the population.

Dr. Matthew Wynia, director of the Center of Bioethics and Humanities at the University of Colorado where they are using a lottery system for Regeneron treatments, said it was deeply unfair to allow priveleged individuals to skip the queue.

‘That’s one of the reasons why we decided that we would allocate this only through the state and only through this random allocation process so that no one could get a leg up by virtue of their special connections,’ he told New York Times.

Senior pharmacy director for University of Utah Health, Erin Fox, who helped her state draft criteria for who is eligible for the treatment, said that patients often met the sttae’s criteria to receive the drug but it was so scarce that it was left to individual hospitals to decide who should receive it.

‘We’ve been trying to get the word out so that as patients might get a positive test they could get information that they might qualify for treatment, but that only works for people with a lot of resources,’ Dr. Fox said.

Three top officials in the FDA also raised concerns about the seeming ease with which people at the White House could access the drugs while the rest of the country struggled to get their hands on it.

Concerns were raised after numerous members of the Trump adminstration were diagnosed with Covid and treated with Regeneron’s cocktail of drugs, including Trump and Melania, Ben Carson and Giuliani. 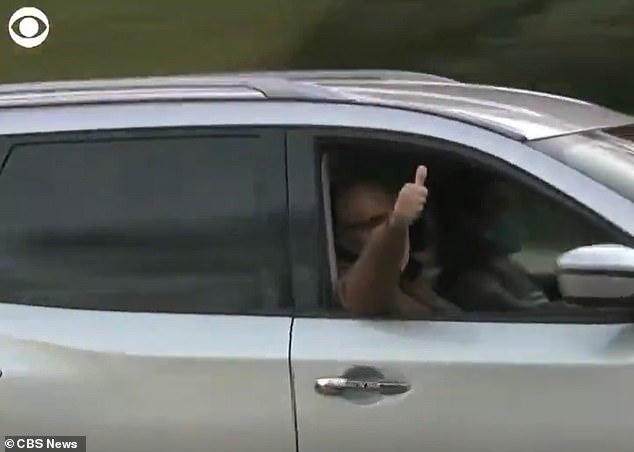 Giuliani, who is 76 putting him in a high-risk category, tested positive and was admitted to the medical center Sunday

Trump’s personal attorney flashed a thumbs-up to reporters and waved as he was driven out of Georgetown University Hospital around 5 p.m. Wednesday

Rudy Giuliani, President Trump’s personal lawyer, flashed a thumb’s up to reporters as he left a hospital in Washington, D.C. on Wednesday (12/9) after being treated for COVID-19. pic.twitter.com/Z1EX5l7qI7

Giuliani traveled across multiple states in the lead-up to his diagnosis, shunning masks and social distancing while he spearheaded Trump’s legal battle and made unfounded claims that the presidential election was ‘rigged’.

Scores of people could have been infected by the former New York City Mayor and he is now being looked at as a potential superspreader.

His co-counsel Jenna Ellis tested positive Tuesday while the Arizona legislature announced it was shuttering for two weeks after Giuliani met with lawmakers there during one of his efforts to overturn the election result in the state.

Giuliani wore a face mask as he departed hospital – despite dismissing CDC guidance just yesterday when he called in to his radio show and told listeners ‘you can overdo the masks’.

He called in to WABC in New York from his hospital bed for a second day in a row Wednesday and revealed he would be discharged later that day.

He said he was feeling ‘just about 100% percent right now’ after being given a cocktail of drugs which he described as ‘miracles.’

‘I feel just about 100 percent right now. I’m going to be discharged this afternoon,’ he said, adding that he would be quarantining for a few more days.

‘I’ve got to quarantine for a few more days. Because the way they calculate it, I probably got it about seven, eight days ago. So I’ve got about three or four more days to make sure it’s out of my system.’

He reeled off his lack of symptoms for the virus, saying he mainly had a ‘teeny cough’.

‘Right now, I’m functionally fine. I have no pains, no fever, I can walk around fine. My breath is good. I have a teeny cough. It’s going away. I feel better than when I came in,’ he said.

Giuliani told listeners he ‘took some of the same medicines’ as Trump ‘and I have to say they are miracles’.

‘There’s one that I took – by the next morning I felt like I was 10 years younger,’ he said.

He later dialled in to WABC’s Cats at Night show where he told John Catsimatidis he would be walking out of hospital as soon as the call was over.

He praised the medical staff at the hospital and admitted ‘the White House physician helped a lot, the President helped a lot.’ He called in to WABC Wednesday and said he was feeling ‘just about 100% percent right now’ after being given a cocktail of ‘miracle’ drugs. Giuliani said he was taking remdesivir, the steroid dexamethasone and an unidentified ‘cocktail’. He is pictured with Trump lawyer Jenna Ellis. Both tested positive for coronavirus

‘They got me better in two days,’ he said, adding he would be in his hotel until Sunday.

On Tuesday, Giuliani revealed live on WABC that he had been given the same cocktail of drugs Trump was given during his own bout with the virus back in October.

Giuliani said he was taking remdesivir, the antiviral medication that received FDA approval for emergency use against COVID-19 in October, and the steroid dexamethasone.

He said he went to the hospital and took the treatment at the request of Trump and the White House doctors who convinced him it would speed up his recovery.

‘[Trump’s] doctor sent me here. Talked me into it. I didn’t really want to go to the hospital and he said ‘don’t be stupid, we can get you over it in three days if we send you to the hospital’,’ he said.

He described taking a ‘cocktail’ but did not divulge what the drug was, only that he felt ‘100 per cent better’ as soon as he took it.

‘The minute I took the cocktail yesterday I felt 100 per cent better. It works very quickly. Wow!’ he said. He is the latest friend of Trump to get access to emergency COVID drugs that are not readily available to the American public. Trump pictured leaving hospital in October 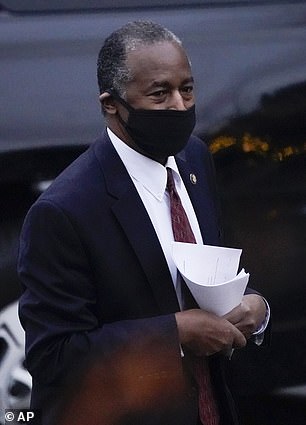 To date, Trump, Chris Christie and Ben Carson have all contracted coronavirus and were all treated with emergency antibody treatments

Giuliani also brushed off concerns about the costs of the treatment he was given.

‘I didn’t know that. I mean they give it here at this hospital. They went over with me the five methods of treatment that they had,’ he said.

However he admitted that he had likely leapfrogged access to the limited treatment because ‘when you’re a celebrity people, they’re worried if something happens to you they’re going to examine it more carefully, and do everything right.’

Giuliani’s access to the emergency drugs and his flippancy about it has sparked criticism from the medical community as healthcare professionals across America are faced with the agonizing choice of deciding which very sick patient to give the treatment to over another.

To date, Trump, former New Jersey Governor and Trump aide Chris Christie and Health and Human Services Secretary Ben Carson have all contracted coronavirus and were all treated with emergency antibody treatments.

Carson was hospitalized at Walter Reed last month and was given Regeneron. He wrote last month on Facebook that he was ‘extremely sick,’ adding: ‘President Trump was following my condition and cleared me for the monoclonal antibody therapy that he had previously received, which I am convinced saved my life.’

Christie, who was hospitalized after attending the Rose Garden superspreader event in October, was treated with Eli Lilly’s experimental antibody treatment as well as remdesivir.

Trump was also given Regeneron, dexamethasone and remdesivir during his hospital stint.

At the time of Trump and Christie receiving the antibody drugs, the treatments were not approved by the Food and Drug Administration.

Questions are being asked around why Trump and his friends are able to easily access COVID-19 treatments that are not readily available to the American public.

Both drugs were granted emergency use authorization by the FDA last month for mild-to-moderate COVID-19 in adults and children who are at high risk of progressing to severe COVID-19. Doctors are voicing outrage that people in Trump’s inner circle are accessing the drugs due to their connection to the president. Pictured Regeneron in New York which was given emergency authorization

Distribution of the drugs began at the end of November with doses allocated based on which states have the highest numbers of infections and hospitalizations.

Health Secretary Alex Azar said Wednesday that 278,000 doses of the two therapies had been allocated so far.

But, with the US currently averaging around 200,000 new infections every single day, this doesn’t even come close to catering to those who need it.

So rife are the shortages of the drugs that the Massachusetts General Hospital plans to decide which eligible patients receive the drug through a lottery system.

‘The notion that we are going to be able to treat a significant percentage of the people who qualify for the drug with the drug – it’s not going to happen,’ he said.

Nationwide, 15.3 million people have been infected and more than 288,000 Americans have died from coronavirus. Social networks surrender to the beauty of the daughter, Dinorah Valentina, of Alicia Machado | The State