The first daughter recycled a $2,750 silver and crimson Markarian dress she had first worn for the annual Gridiron dinner in March last year.

‘This year’s theme, “America the Beautiful,” is a tribute to the majesty of our great Nation!’

First lady Melania had unveiled her final Christmas decorations at the White House on Monday, revealing a toned-down decor during a time the country is dealing with rising coronavirus cases and scaled-back holiday gatherings.

Her ‘America the Beautiful’ theme featured a room dedicated to front line workers, ornaments made by children across the country, and a stocking for Barron.

‘During this special time of the year, I am delighted to share ‘America the Beautiful’ and pay tribute to the majesty of our great Nation. Together, we celebrate this land we are all proud to call home,’ the first lady wrote on Twitter, where she previewed the classic red, gold and white decorations that fill the state rooms of the White House. Post three images of their night at the White House Ivanka said: ‘Touring @FLOTUS’s dazzling 2020 White House Christmas decorations Friday evening! ‘This year’s theme, “America the Beautiful,” is a tribute to the majesty of our great Nation!’ Teaming her silver and crimson bow dress with red heels wore her hair down for the event. Husband Jared complimented her outfit a suit and matching red tie. The pair pose with their arms around each other in one image posted by Ivanka

In touching images released by Ivanka Sunday, the president’s eldest daughter leans on her husband of 11 years shoulder. The couple, who have three children, hold hands as they pose in front of one tree.

Teaming her silver and crimson bow dress with red heels, Ivanka wore her hair down for the event. Husband Jared complimented her outfit, wearing a suit and matching red tie.

In two more images the pair pose with their arms around each other. Ivanka recycled a $2,750 Markarian dress she had first worn for the annual Gridiron dinner in March last year, pictured then

Melania herself had cut a stylish figure in a $6,200 double-breasted belted leather coat from Alexander McQueen as she attended her husband’s first campaign event since losing the election to president-elect Joe Biden on Saturday.

The former model wore the sharply tailored coat, which featured on the Parisian runway in Autumn last year, as a dress, with a black long sleeved crew neck top layered underneath the garment.  She teamed the high-fashion ensemble with a pair of $875 zebra pony skin stilettos, piped with red leather, by Manolo Blahnik.

She said: ‘President Trump continues to fight for you every single day. Do not let your voices be silenced. We must keep our seats in the Senate.’ Melania Trump, 50, looked sensational in a $6,200 red leather Alexander McQueen coat as she joined the President at a campaign rally in Georgia last night

Melania personally selected every detail of the holiday season, the East Wing had said.

There are acknowledgements of the pandemic that has infected more than 13 million Americans and killed more than 267,000.

150 varieties of foliage and floral

160 children made ornaments for the official Christmas Tree

Gingerbread White House made of 275 pounds of gingerbread, 110 pounds of pastillage dough, 30 pounds gum paste, 25 pound of chocolate, and 25 pounds of royal icing

The red room is dedicated to first responders, frontline workers and essential personnel like grocery store employees. The village scene on the fireplace mantel includes a hospital and grocery store.

The library focuses on notable women throughout history with ornaments featuring famous American women like the artist Georgia O’Keefe. The décor includes yellow roses, which was the symbol of the suffragettes. This year marks the 100th anniversary of the 19th amendment, which gave women the right to vote.

The china room, which features examples of the china settings of every administration, is decorated like a kitchen. On the fire place are stockings for the president, first lady and Barron.

The official White House Christmas Tree – an 18 foot fraser fir that sits in the Blue Room – features 160 ornaments made from children across the country, who featured an item from their home state on their contribution. The ornament also features their name, age and their home state.

It is decorated with bright yellow bows to contrast the red bows that feature on the trees lining the main hallway through the state rooms.

In the main hallway are several dozen trees decorated in red ornaments with red and red plaid bows. Under the branches are gifts with labels such as ‘faith,’ ‘love,’ and ‘peace’ as a reminder that gifts come in many forms, according to the East Wing.

Gone are any controversial pieces like the red cranberry Christmas trees from two years ago that prompted many a social media meme. Instead, this year the White House is filled with foliage from across the country, yellow and white roses (roses are the national flower), and ornaments with traditional American symbols like the flag and the eagle.

The traditional gingerbread house – consisting of 275 pounds of gingerbread – is in the shape of the White House with, for the first time, the East and West Wings featured. Included in that is Melania Trump’s revamped Rose Garden, complete with tiny flowers with the stems made out of pasta.

There are other traditional touches such as the White House crèche, now in its 53rd year on display and the Christmas tree dedicated to Gold Star families. That tree is draped in blue, the color of perseverance and justice, and the families who decorated it placed the name of their fallen family member on ribbon that will adorn the tree. Melania personally selected every detail of the holiday season, the East Wing said. There are acknowledgements of the pandemic that has infected more than 13 million Americans and killed more than 267,000 Decorations in the red room are dedicated to first responders, front line workers and essential employees like grocery store workers. The village scene on the fireplace mantel includes a hospital and grocery store This year the East Colonnade, the site of last year’s infamous red trees, has urns containing plants from across the US The East Room is dedicated to transportation with trains, planes and automobiles. Included in that is an ornament in the shape of Air Force One and a train labelled ‘White House Express’ that runs on a table in the center of the room. The décor celebrates innovation in technology from the first Transcontinental Railroad to the Apollo 11 lunar landing, including the logo of the Space Force, which was started by President Trump.

The Green Room is dedicated to wildlife and features a special glass panel hanging in each of the two windows – one featuring a deer and one a duck – that the light can shine through. The panels are made of multilayers of glass, giving them a stained glass effect.

The East Colonnade, the site of last year’s infamous red trees, is much more toned back this year. Instead of trees, foliage from various states fill urns that line the walk way.

This is Melania Trump’s final year overseeing the holiday decor at the White House.

It comes after a recording released by her former friend and employee Stephanie Winston Wolkoff, reveals  Melania complaining ‘who gives a f*** about Christmas stuff’ while discussing the traditional first lady task of decorating the executive mansion for the holiday.

The tapes were released when Wolkoff appeared on CNN on October 1, hours before it was announced Melania and Donald Trump tested positive for Covid-19. Wolkoff was promoting her memoir, ‘Melania & Me,’ which portrays the first lady in an unflattering light.

Melania Trump has blasted the book as ‘idle gossip.’ The decorations in the library are dedicated to the 100th anniversary of the 19th amendment, which gave women the right to vote. This is Melania Trump’s final year overseeing the holiday decor at the White House Don’t tell this to any man | The State 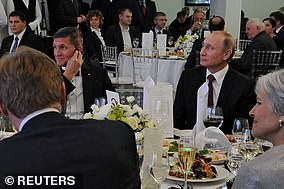