The incident happened near the city of Pooler, just outside of Savannah, where Vice President Mike Pence was set to campaign with Loeffler and Sen. David Perdue that afternoon.

Images from the crash site show one car in flames, and then totally burned out, per WSAV.

Lucy Kemp (right), the daughter of Gov.  Brian Kemp, called Harrison Deal (left) her ‘best friend’ after he died in a fiery car crash on Friday

‘It’s impossible to put into words just who Harrison Deal was,’ Lucy Kemp, 19, said in a statement obtained by The New York Post.

‘Though I only knew him for a little over two years, we lived a lifetime together. He was my best friend and the impact he had on my life will never fade. He taught me how to laugh and not take life too seriously.

‘He gave me confidence in myself I never knew I could have. He was loyal, compassionate, and full of joy. I truly believe I got a glimpse of Heaven in my time with Harrison. Lucy Kemp: ‘Though I only knew him for a little over two years, we lived a lifetime together. He was my best friend and the impact he had on my life will never fade.’ Pictured: Lucy Kemp and Harrison Deal Lucy Kemp: ‘My heart aches at the hole he left in my heart, but oh what a blessing it is that I can rejoice in the truth that we have a sovereign God and Harrison is at home with Him, and I will see him again.’ Pictured: Harrison Deal and Lucy Kemp Pictured: Emergency workers run to the crash site where a car was on fire

Lucy, one of three daughters, described the feelings of grief she felt over Deal’s death.

‘The love he showed me was beyond comprehension and I didn’t deserve it. My heart aches at the hole he left in my heart, but oh what a blessing it is that I can rejoice in the truth that we have a sovereign God and Harrison is at home with Him, and I will see him again.

‘Harrison’s life brought others to the foot of the cross, and in this he accomplished all that we are meant for in this life.’

It’s unclear if Deal, from Bulloch County, had been performing campaign duties at the time. The cause of the crash is under investigation. It’s unclear if Deal was performing campaign duties at the time of the crash on Friday morning, and an investigation into the crash is underway. Pictured: Harrison Deal and Lucy Kemp

Jarrett Kemp, the governor’s oldest daughter, also shared a touching message on Facebook regarding the death.

‘Harrison, as I write these words I think to myself how grateful I am to have had you in my live and my families. You completed us and you will be deeply deeply missed by your second family. You were the brother I never had but always wanted,’ she wrote.

‘Thank you for loving my sister the way you did. As an older sister, I’m protective but I never had to worry about Lucy because I knew you always had her. You treated her so well and have set the bar beyond high.

‘I am forever grateful for the love and care you showed her. I hope my kids and future husband are half the man you were.’ Deal (top left) was pictured with Georgia First Lady Marty Kemp and her two daughters, Amy and Lucy, supporting Loeffler for Senate in a July photo.

Harrison appeared to be very close with the Kemp family, with photos on his social media page of Lucy.

The two attended football games at the University of Georgia, posed together at an event celebrating Gov. Kemp’s 2019 inauguration, spending time together around Georgia.

‘Got all our Kelly gear and we’re ready to get to work!!!!! 119 days until the election,’ Harrison wrote at the time. Pictued: Harrison Deal and Lucy Kemp posed together at an event for Gov. Brian Kemp after his inauguration in 2019

Gov. Kemp issued an official statement after news of Deal’s death spread, sharing a Christmas photo pf his family and the aide.

‘Today, we lost a member of our ‘Kemp Strong’ family and words cannot express how much Harrison Deal’s life, love, and support meant to us,’ wrote the Kemp family.

‘He was a person of deep faith, unmatched integrity, and incredible kindness. Harrison was the Kemp son and brother we never had. Our prayers are with the Deal Family – and countless others – as they mourn the tragic loss of Harrison.

‘He brought people together and made everyone feel important and special.’ This photo shows Kemp and his family and Deal (third from right) with his daughter, Lucy Kemp (second from right), and Deal’s family Deal: ‘Mr. Brian is first off a dad and a husband to one of my favorite families. I will always be willing to fight for each one of them’ Pictured: Harrison Deal and Gov. Brian Kemp

Representatives from Kemp’s office confirmed with 11 Alive that he would not attend President Trump’s rally for Loeffler and Perdue in Valdosta on Saturday.

Just three days before his death, Deal shared a photo of him and Kemp to Facebook where he lauded the governor.

‘I will never be ashamed of this man. To have known him personally for the past two years, I can assure you the information currently being spread about him is completely false. He is the furthest thing from a corrupt man,’ wrote Deal.

‘He will always stand up for what’s right and what’s in the best interest for the people of Georgia.

‘Mr. Brian is first off a dad and a husband to one of my favorite families. I will always be willing to fight for each one of them.’

Following his Deal’s death, Loeffler canceled plans to join Pence at the rally ahead of the contentious Georgia Senate race as a result of the tragedy. Both she and Perdue shared their condolences on Twitter.

‘It is with an extremely heavy heart that we mourn the loss of Harrison Deal. My heart aches for his family, and Jeff and I will continue to surround them in love and prayer in the days ahead. Harrison was a beloved member of our campaign team,’ Loeffler wrote on Twitter. Sen. David Perdue also shared his condolences on Twitter after the car crash

Perdue revealed that he and his wife, Bonnie, were ‘devastated’ by the news.

‘Harrison was a smart, kind young man with a bright future ahead of him, and he is gone too soon,’ he wrote.

‘We are praying for his parents, Curt and Jenni Deal, and his sisters, Hannah and Halli. I ask the people of Georgia to join us in keeping the entire Deal family in their hearts on this terrible day.’

Deal was set to graduate from University of Georgia in 2022.

His unexpected death comes as Loeffler and Perdue prepare for a January 4 runoff race against Democratic candidates Raphael Warnock and Jon Ossoff, respectively.

The election’s outcome will decide whether the Democrats or Republicans will control the Senate next year.

Republicans currently hold 50 seats in January, but if Loeffler and Perdue lose the Senate will divided 50-50. In that case, Vice President-elect Kamala Harris will make a tie breaker. 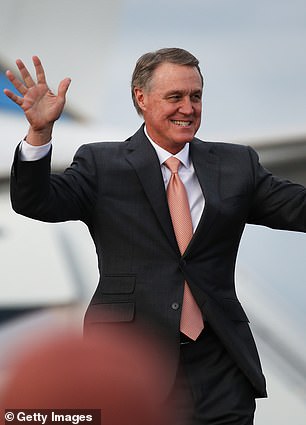 Trump has tweeted in support of Perdue and Loeffler, but has spent more energy falsely suggesting that Kemp and Raffensperger have the legal authority to reverse President-elect Joe Biden’s victory in Georgia. State law gives them no such option.

On Friday, Trump’s campaign filed a lawsuit in Georgia that called for a new statewide presidential election and furthered allegations of voter fraud.

Initial returns showed Biden with a lead of more than 14,000 votes out of about 5 million cast. An initial hand recount put Biden’s margin at about 12,500.

As Pence arrived in the state, Georgia officials were in the final stages of a third count requested by Trump’s campaign. 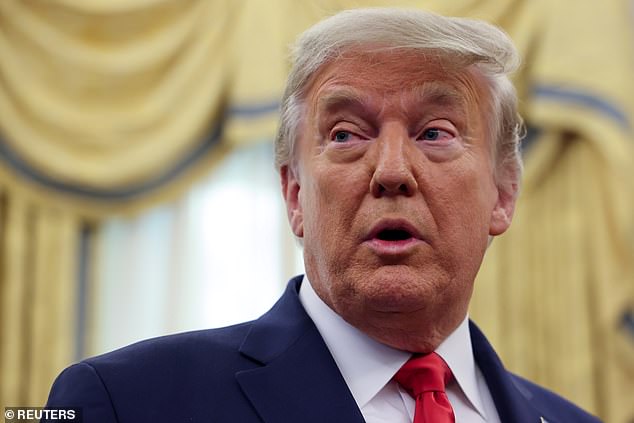 Pictured: ‘U.S. President Donald Trump responds to a question from a reporter after a medal ceremony in the Oval Office at the White House in Washington, U.S. December 3’

Trump’s Valdosta rally was scheduled in an effort to bolster conservative support ahead of the senate race.

White House press secretary Kayleigh McEnany embraced the idea that Trump can make or break the runoffs for Republicans.

‘The president’s presence in Georgia will push Sens. Loeffler and Perdue over the finish line,’ she said Friday, crediting the president with Republican turnout that narrowed House Democrats’ majority and delivered victories for several vulnerable Senate Republicans.

Millions of Americans will still travel on Thanksgiving despite CDC warnings