The family of former Zappos CEO Tony Hsieh have released a touching statement regarding his death as it’s revealed the millionaire, worth $840million, left no will.

The shoe magnate’s family released the statement Thursday, nearly one week after Hsieh died at a Connecticut hospital from complications of smoke inhalation sustained during a house fire.

Firefighters had to drag an unconscious Hsieh out of burning shed at New London home, which belonged to a former Zappos employee, after being told someone was trapped inside at 3.30am on November 18, according to fire chief Thomas Curcio.

He had initially been taken to Lawrence + Memorial hospital in New London, suffering from burns and smoke inhalation before being transferred in a Lifestar helicopter. Authorities said Hsieh was inside the shed of a New London, Connecticut, home when it caught on fire during the early morning huors of November 18 (pictured) In interviews before Hsieh’s death on Friday last week, authorities said they has could not reveal the cause of the fire because it was still under investigation. Pictured: the shed of the New London home

‘The Hsieh family is deeply grateful for the outpouring of love and respect shown in the wake of Tony’s passing,’ the statement, obtained by DailyMail.com, read.

‘It is clear to the family that he had a profound impact on countless people all over the world. He was a forward thinker with a zeal for bringing joy to others, and bridged communities and people from all walks of life. He valued experiences and relationships over material wealth, and always chose kindness.

The Hsieh family’s statement applauded his selflessness and how much he meant to his parents, Richard and Judy.

‘Tony was extremely accomplished in both his personal and professional lives, his parents are most proud of how he turned out as a human being. He had true compassion and an endless desire to elevate everyone around him. He would often refer to himself as the caboose, because everyone else came first.

Happiness, the statement said, was one of Hsieh’s most invaluable gifts to the world.

‘The Hsieh family hopes to carry on Tony’s legacy by spreading the tenets he lived by — finding joy through meaningful life experience, inspiring and helping others, and most of all, delivering happiness.’

Hsieh, 46, retired as Zappos CEO in August after 20 years leading the company.

He sold his first company LinkExchange to Microsoft for $265 million when he was just 22. 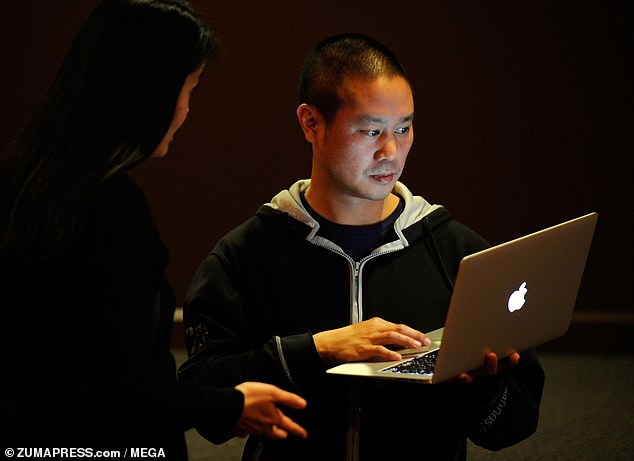 On Thursday, court documents obtained by Associated Press revealed that Hsieh, who was worth $840million, did not leave behind a will Pictured: An image of former Zappos.com CEO Tony Hsieh is displayed outside the Golden Gate hotel-casino in downtown Las Vegas on November 28

He then founded Venture Frogs which in 1999 invested in Zappos — named from Zapatos, Spanish for shoes — and he took over as CEO.

Now, it’s been revealed that Hsieh – who’s was worth an estimated $840million – did not leave behind any will, per Associated Press.

Documents filed in court in Nevada on Wednesday on behalf of his family said they are ‘unaware of the existence of a fully executed estate plan and have a good faith belief that the Decedent died intestate.’

Hsieh’s father Richard Hsieh and his brother Andrew Hsieh have asked for an order that would allow them to access his accounts and protect his assets. His mother Judy and other brother David were listed as next of kin.

The family’s lawyers wrote that they ‘seek authority to investigate the existence of an estate plan by accessing safe deposit boxes, speaking with the Decedent’s legal counsel and associates, and taking such other reasonable acts to ensure that Decedent’s properly executed testamentary directives are implemented.’

The home where Hsieh was involved in the fire is owned by Rachael Brown, a former employee at Las Vegas-based Zappos, who, according to the company website, rose from a temporary phone representative to being a critical member of the management team.

It is not known if Brown, who the Las Vegas Review-Journal called ‘one of Hsieh’s closest confidantes,’ was at the house when the blaze broke out.

Reports say Hsieh’s brother was there at the time. The house sustained visibly no damage from the fire. The home is owned by Rachael Brown (pictured with Hsieh), a former employee at Las Vegas-based Zappos, who, according to the company website, rose from a temporary phone representative to being a critical member of the management team 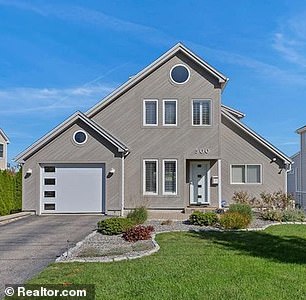 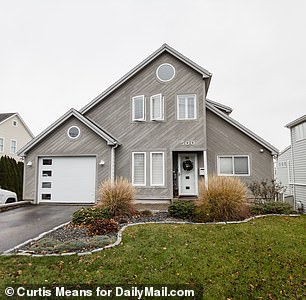 The property (shown before the fire, left, and after, right), which overlooks Long Island Sound, showed no sign of damage after the deadly blaze

The Connecticut Office of the Chief Medical Examiner has already ruled his death accidental, but a dispatch tape obtained by DailyMail.com revealed that he was ‘barricaded’ inside the shed.

‘The male is barricaded inside and not answering the door,’ the dispatcher says.

‘Everyone else is outside the house. They are trying to get him to open up.

DailyMail.com has also exclusively learned that Hsieh’s drug abuse escalated at the time of his death. And friends fear that his use of the laughing gas nitrous oxide and his love of candles could have caused the fire that killed him.

‘In recent months the nitrous oxide had become as important to Tony as his alcohol,’ one close colleague said. ‘And Grey Goose vodka was his best friend.’

Although nitrous oxide is not flammable it does accelerate the burning of combustible material that is already alight, according to PubChem.

A spokeswoman for the office confirmed to DailyMail.com that the ruling was made before toxicology reports — not due till after the New Year — have been completed. ‘But that will not change unless the medical examiner deems the tests relevant,’ she said.

People close to Hsieh are now painting a dark picture of his heavy drug use which they say had escalated since he quit as CEO of the online shoe giant Zappos in the summer.

‘His heavy alcohol and drug use was known by everyone aroundf him,’ the colleague said. ‘Anyone that challenged him about it was cast aside.

‘The talk among his former colleagues at Zappos is that Tony was likely in the shed blacked out drunk and on drugs. He was a major alcoholic and a drug addict. He was hardcore.’

Hsieh had often talked about his drug use and his love in his younger days for all night raves. Vanity Fair called him ‘the consummate partier’ who often took shots of Grey Goose ‘just because.’

‘We trust our employees to use good judgment, which 99.9 percent of them do,’ he told Playboy. ‘We’d rather not create policies to address the 0.1 percent at the cost of fun for the other 99.9.’

He loved going to the annual Burning Man celebration in Nevada’s Black Rock Desert, where open drug use is common.

Recently though, nitrous oxide had become his drug of choice, taking it in the form of ‘whippets’ straight from the cartridge of a whipped cream dispenser.

‘He would take dozens of them a day,’ the colleague said.

‘He lived a crazy, eccentric life. The drugs often made him hallucinate, he became paranoid — that could explain why he barricaded himself in,’ he added.

‘Tony was very fond of candles. He liked to set the atmosphere.’

‘The guess is that he managed to ignite one of the nitrous oxide canisters which caused a small explosion that killed him.’ 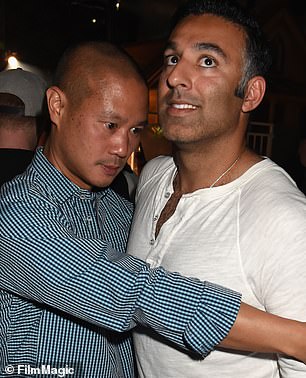 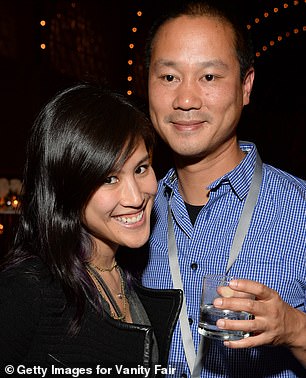 Tony Hsieh is pictured left with Founder of Life is Beautifyl Rehan Choudhry at the 2014 pre-party for Life is Beautiful festival. Pictured right, Hsieh with Mimi Pham at the Vanity Fair New Establishment Summit Cockatil Party on October 8, 2014 in San Francisco

Fire officials in New London have not said whether there were candles in the shed where Hsieh was critically injured. Chief Thomas Curcio did not return DailyMail.com’s calls.

In interviews before Hsieh’s death on Friday last week, Curcio said he has said he could not reveal the cause of the fire because it was still under investigation.

Megan Fazio, a spokeswoman for Hsieh’s company later said that she would not comment on Hsieh’s ‘personal matters.’

‘We are not providing any interviews at this time to give those who just lost a friend and family member their very necessary time and privacy to grieve, and we are not at liberty to discuss anything further than the statement we provided as the investigation of the fire as it is still ongoing, and it would be speculative to comment on matters under investigation,’ Fazio added.

Hsieh’s colleague told DailyMail.com that Hsieh surrounded himself with people who ‘enabled’ his addictions. ‘There was always people around, people living in his homes.

‘He lived to bring people together and even wrote a book about bringing happiness. ‘So it’s sad that he was all alone in a storage area when he was injured.’ Hsieh (pictured) was the son of Taiwanese immigrants and founded Venture Frogs which in 1999 invested in Zappos — named from Zapatos, Spanish for shoes

Hsieh was the son of Taiwanese immigrants, who met as graduate students at the University of Illinois.

He had a passion for llamas and alpacas and the area he lived in in Vegas became known as Llamapolis.

Hsieh was known as an iconoclastic boss. One of his schemes was to offer $1,000 for every year served up to a maximum of $5,000 for any employee who wanted to leave. He believed that if they no longer had the passion to want to work for him it was better to pay them to quit.

He was also known for his visionary transformation of parts of Las Vegas that had suffered in the shadow of The Strip. He lent money he had received from Amazon to help small businesses build up areas of the city.

And one-time venture investor Chris Sacca said in a tweet: ‘Tony Hsieh might be the most original thinker I’ve ever been friends with. He questioned every assumption and shared everything he learned along the way. He genuinely delighted in making anyone and everyone happy.’ 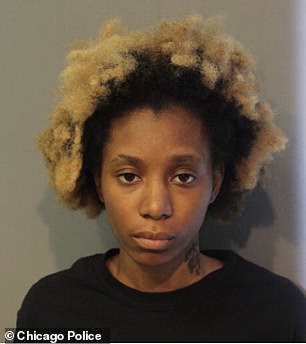 Woman, 23, arrested after she bypassed security, boarded aircraft without a ticket at O’Hare Airport 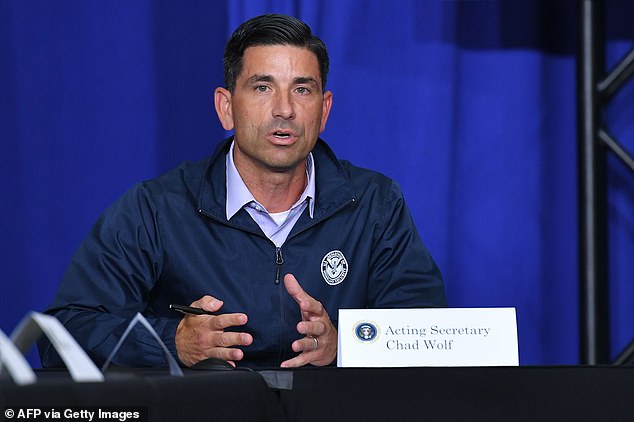