Jane Seymour has said that she thinks the MeToo ‘rules’ have gone too far ‘in the opposite direction’, with many people now over-conscious about how they act.

The actress, 69, explained how she believes there are now ‘all these rules’ for interactions, which she called ‘ridiculous’.

Speaking with The Sun, Jane also revealed that she took a year out from working after she was groped on the thigh by an unnamed Hollywood producer in 1972.

‘All these rules’: Jane Seymour has said that she thinks the MeToo ‘rules’ have gone too far ‘in the opposite direction’ (pictured in Beverly Hills in 2018)

Talking about the MeToo movement, Jane said: ‘I think, like anything, people go in the opposite direction.

‘People are very conscious now, especially in the media business. There are all these rules. It’s ridiculous.’

The former Bond girl used the example of a sound recordists explicitly asking for her permission to place her mic pack on her dress.

Jane explained how she’d tell them to ‘just hurry up’ and point out where her bra is to hang the pack properly in order to get the best recording of her voice on set. Throwback: The former Bond girl said, ‘people are very conscious now, especially in the media business. There are all these rules. It’s ridiculous’ (pictured in Sinbad and The Eye Of The Tiger in 1977)

The star, whose latest role is as Eleanor of Aquitaine in Glow and Darkness, also discussed how a Hollywood producer groped her thigh in 1972.

Jane said she took a year off from acting following the incident, but decided to return to auditions when she realised she was missing out on what she loved.

Reflecting on the decision to return to work, Jane said: ‘I just realised that was even more stupid, because why would I quit something I loved because of one person?’

Elsewhere in the interview Jane discussed her beauty regime, reiterating how she isn’t interested in surgery and instead credits her looks to skin care and pilates. Strictly business: The star used the example of a sound recordists asking for her permission to place a mic pack on her dress to show how she thinks things have gone too far ‘in the opposite direction’ in showbiz since MeToo (pictured in Cannes in 2015) Candid: Jane also revealed that she took a year out from working after she was groped on the thigh by an unnamed Hollywood producer in 1972 (pictured in the same year)

However Jane did admit she thinks she weighs more now, but this isn’t a negative as she also believes she looks better in photographs now than when she was thinner.

It comes after Jane insisted she could easily pass for 25 as she hit back back after producers got a younger actress to play her role in flashback scenes for her new mini-series.

The actress told how show bosses originally told her she could play herself at 25 in her new role as Eleanor of Aquitaine, in which she stars alongside Joan Collins.

Jane said the option was then taken away and handed to a younger actress, leaving her fuming.

She explained in an interview with The Times: ‘They told me that only I was going to play myself at 25 but before I even got round to doing it, the day before, without telling me, they found another actress to play me at 25… Big role: Jane said she returned to auditions after the years break when she realised she was missing out on what she loved (pictured with Roger Moore in 1973 Bond film Live and Let Die)

‘It’s something I really don’t understand at all because believe it or not, and you can see on Instagram, they don’t even need to do the facial stuff on me. It works just fine. Joan Collins is 87 and she’s supposed to be playing a woman who dies at 40’.

The actress revealed that thanks to ‘rigid self-discipline’ and eating just one meal a day she weighs the same as when she was 17.

She also explained that she has never had facial surgery, unlike many of her acting contemporaries.

The star then went on to give the secrets of her youthful looks, explaining she eats one meal a day comprising ‘vegetables lean fish or a small piece of chicken and, very occasionally, a thin slice of lean steak. [She] snacks on raw carrots or celery.’ Wow: It comes after Jane (pictured in July) insisted she could pass for 25 as she hit back back after producers got a younger actress to play her role in flashback scenes for her new show

Jane is starring opposite Joan Collins in new series Glow And Darkness, a medieval drama depicting the life of Saint Francis of Assisi, while focusing on popular historical figures such as Richard the Lionheart.

On surgery, which she has always been candid about, Jane said: ‘I have nothing against it, I think it’s fabulous if that’s what you want to do and obviously I’m looking around at people my age who look like Barbie dolls.’

Jane has previously admitted to having a boob job and having her eyes done, but other than that insists an actress needs to ‘be able to move their face’.

Her chat comes after Jane revealed last month that she went through an ‘awakening’ after going into an anaphylactic shock on a film set – an experience which ‘changed her whole life’. Way back when: Jane- pictured here in 1975 when she was 25 – says she could still play a young version of herself now at the age of 69

The former Bond Girl claimed she ‘died, left her body and was resuscitated’ as she shot scenes for her portrayal as American-born Greek soprano Maria Callas in Onassis: The Richest Man in the World back in 1988.

Actress Jane insisted she was determined to ‘come back’ as she has children she wanted to raise and aimed to ‘make a difference’ in the world.

The screen star explained that she went through the terrifying ordeal after an antibiotics injection missed a muscle and went into a vein.

Recalling the incident on a recent episode of the ID1OT podcast, the award-winning thespian said: ‘I had anaphylactic shock and I died and I was resuscitated.

‘After the injection I could feel my throat close, my heart beating too fast, it was like a loud noise in my chest and then suddenly silence, complete peace. Peace like I’d never experienced except when I’ve tried to do meditation. Talented: Jane is starring opposite Joan Collins (pictured) in new series Glow And Darkness, a medieval drama depicting the life of Saint Francis of Assisi

‘I saw this white light and then I looked down and I saw this body and it looked like me, and I’ve seen myself in movies and I know what I look like.

‘There I am and there’s this man screaming in Spanish ’emergency, ambulance’, and now my naked backside and two huge syringes, and he’s screaming down the phone.

‘And it’s like you’re floating round the room, and I could see the syringe with blood in it. Then I remember looking back up at the white light.

‘I remember just saying if I can I want to get back in that body because I have kids that I want to raise and I will not waste my time, I want to make a difference.’

The TV and film star, who has been married four times, shares Katherine, 38, and Sean, 35, with ex-husband David Flynn, and twins John and Kristopher, with former spouse James Keach. Wow! The actress offered the secrets of her youthful looks, as she said she eats one meal a day comprising ‘vegetables lean fish or a small piece of chicken’ (pictured in September) 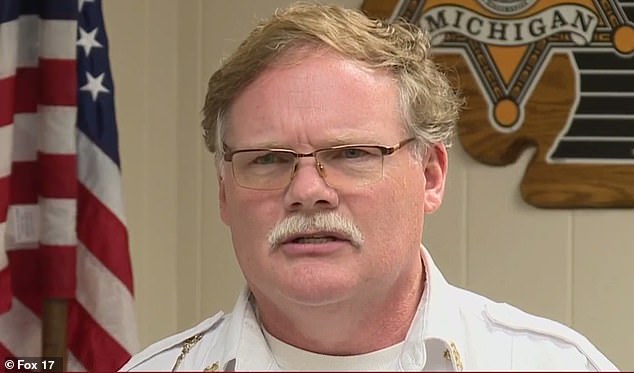