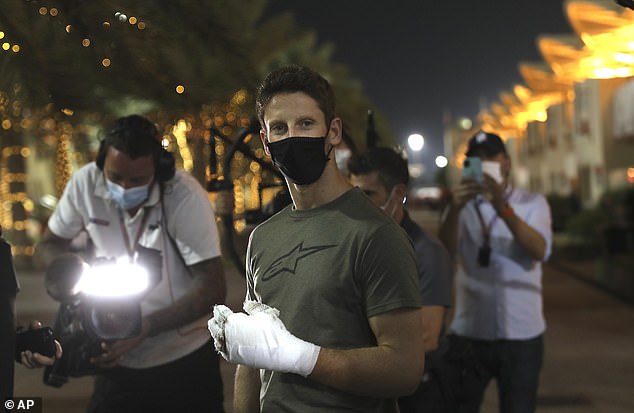 By Ollie Lewis For Mailonline

Romain Grosjean has returned to the scene of his horrendous crash in Bahrain as the Formula One driver continues to make his recovery from the shocking incident.

The French driver for the Haas F1 team miraculously survived the 140mph, 53G crash into a trackside barrier in the opening lap of Sunday’s race, emerging unscathed from the inferno of his destroyed car apart from burns to his hands.

The 34-year-old was admitted to the Bahrain Defence Force (BDF) hospital but a statement released by his team on Wednesday confirmed Grosjean had been discharged after three nights there. The Haas driver’s car hit a barrier at 140 mph, bursting into a huge inferno after the first lap 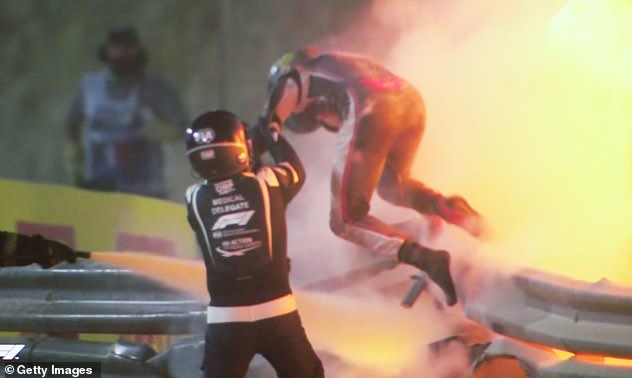 And the Frenchman has returned to the Bahrain International Circuit where the accident happened ahead of this weekend’s Sakhir Grand Prix.

The driver, with wraps on his burnt hands and a face mask on amid coronavirus, joked with Haas staff members as he made his return to the 3.3 mile circuit.

Grosjean has made positive steps in his road to recovery, and is targeting a race return for the final Grand Prix of the season, in Abu Dhabi on December 13.

Grosjean posted a social media picture of his bandaged right hand this week, with the message: ‘My right hand this morning. The happiness I had when I was told that I didn’t need the full dressing anymore and could use my finger was huge. Almost cried. A victory on my way to recovery.’ 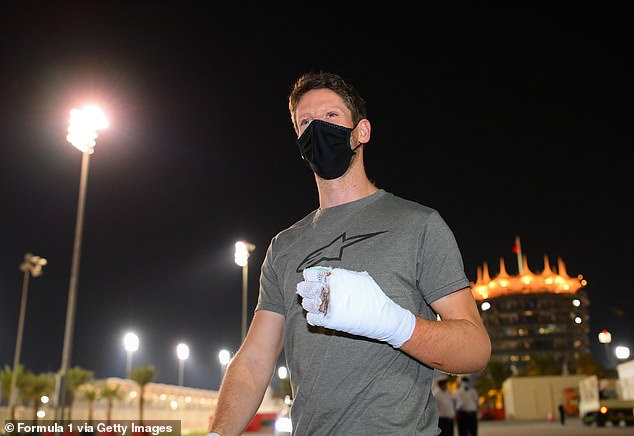 He has been ruled out of this weekend’s Sakhir Grand Prix but would like to race in the UAE on December 13.

Speaking on Tuesday, Grosjean’s team boss at Haas, Gunther Steiner, said: ‘The aim is Romain really would like to do the race in Abu Dhabi (on December 13).

‘I told him try to get better and we will speak on Sunday or Monday and see how he feels and if it is doable.

‘We will cross that bridge when we come to it. I’m not in a hurry to decide what to do, or what is needed because it depends on his health. 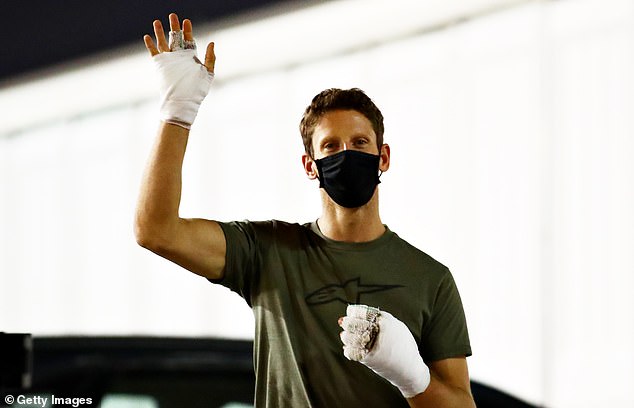 ‘He is just trying to get better to be in the car in Abu Dhabi. That is his aim, and that shows that he wants to keep on doing it.’

Details have emerged of Grosjean’s accident during the first lap of Sunday’s race in Bahrain, including that the heat of the inferno was so intense the visor of his helmet melted.

His ‘halo’ — the titanium and carbon device around the cockpit that protects a driver’s head — had bent the barrier and, seemingly, saved his life.

The section of the track where Grosjean crashed has undergone intensive work ahead of this weekend’s Grand Prix. To greatly reduce the chances of a similar incident there will be a new metal barrier introduced in place of the concrete and this will be protected by a conveyor belt featuring two rows of tyres.

The Sakhir circuit will be run on the track’s outer section layout, which means turn nine, which was turn 13 last Sunday for the traditional grand prix route, will become much faster and it too has seen changes to protect drivers.

‘Following a review of the recent Bahrain FIA Formula One World Championship event with the FIA F1 Race Director, the FIA Circuit Inspector and the FIA Safety Department, the following changes will be made to the Bahrain International Outer Circuit in advance of this weekend’s forthcoming Sakhir Grand Prix,’ the FIA stated.