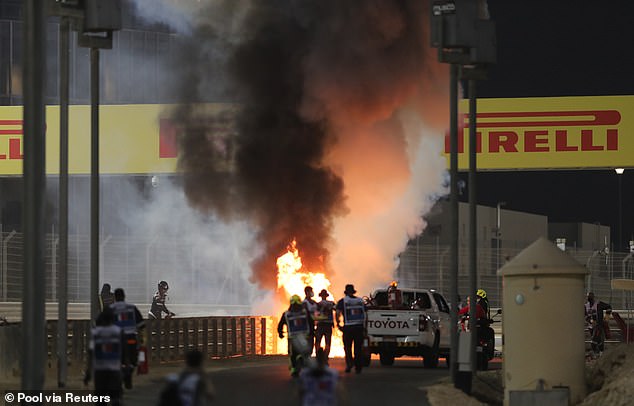 By Jonathan Mcevoy For Mailonine

Romain Grosjean suffered one of the most dramatic accidents of modern Formula One history at the start of the Bahrain Grand Prix – but he amazingly survived.

The Frenchman’s Haas hit the wall at 53G and burst into a ball of flames, splitting his chassis in half and, astonishingly, sending him through the barriers. TV cameras cut away and the race was stopped.

Fears for his safety were palpable in the Sakhir circuit, sparsely populated because of Covid but suddenly heaving a collective sigh of apprehension. He was helped into an ambulance by marshals and limped as he did so. He suffered minor burns to hands and ankles.

It is unusual for a Formula One car to self-combust and it remains unclear precisely what happened – though he collided with Daniil Kvyat before hurtling off at the third corner of the first lap. TV replays later showed him scrambling out of the car as marshals sprayed the scene to douse the flames.

It was a remarkable accident and part of his car penetrated the barrier and a stray wheel jumped over the wall.

Having travelled through the barriers, he climbed to safety by hurdling the wall and returning on the trackside. EVERYTHING you need to know about Pfizer’s Covid-19 vaccine