Rudy Giuliani’s Democrat daughter Caroline has offered her dad some ‘self care tips’ for coping with Donald Trump’s election defeat – including to stop using hair dye.

The filmmaker, 31, penned the piece for Vanity Fair last week in which she said: ‘Avoid charcoal products or anything with artificial dyes, which may result in your face oozing as you make false claims of voter fraud in Philadelphia, for example.’

Her dad Rudy, in his role as the president’s personal attorney, has repeatedly and baselessly claimed that Democrats falsified mail-in ballots to steal the election from Donald Trump. He was seen last week sweating with hair dye running down his face during a lengthy press conference on the issue.

Caroline also tells ‘Trumpworld’: ‘Please note that whining, lying, and grabbing women by the p**** are not skills.’

Harvard grad Caroline, who spoke out last month to say she was voting for Joe Biden, added: ‘Take stock of your failures. Only sociopathic narcissists have delusions of grandeur, blaming others for their failings, often with tragic consequences.’

‘And you’re not a sociopathic narcissist, right?’, she adds. 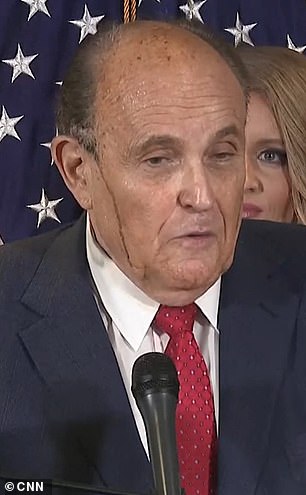 In her essay Caroline also makes a dig at the now infamous press conference held by Team Trump at a local garden center in Pennsylvania.

She writes: ‘For outdoor architectural projects, I recommend Four Seasons Total Landscaping. (Get a jump on your holiday shopping at the literary establishment next door.)

‘This is not a sponsored ad. But it could be! Call me, Fantasy Island.’

And she also appears to reference her dad’s starring role in the new Borat movie in which he was filmed reclining on a bed and appearing to put his hands down his pants.

Caroline adds: ‘Sexual self-care is critical if you don’t want to end up in the crematorium across the street.’ Caroline, left – who describes herself as ‘a filmmaker in the LGBTQ+ community’ – is one of two children Rudy, center, shares with his ex-wife, Donna Hanover. Her brother Andrew is right

In a what appears to be a direct appeal to her dad, Caroline adds: ‘Connect with the people in your life who prioritize science, empathy, and facts.

‘Or at least stop ignoring your relatives who just want you to allow the democratic process to unfold unobstructed.’

Some of her advice seems to be also aimed at Trump.

She writes: ‘Pack up any and all belongings from the White House. Then trek into the wilderness until you lose cell service and Twitter will no longer refresh. Stay until America is back on track. This may take anywhere from eight years to forever.

‘Please note that whining, lying, and grabbing women by the pussy are not skills’, she adds. In October Caroline urged others to vote for Biden, telling them to cast their ballots for Democrats in order to end a ‘reign of terror’.

She accused her dad of feeding Trump’s ‘mob mentality’, calling him the ‘President’s personal bulldog’.

And she told MSNBC that she has spent her life trying to escape from her father’s career in politics, hitting out at Giuliani for adding to the president’s ‘echo chamber of lies’.

‘If being the daughter of a polarizing mayor who became the president’s personal bulldog has taught me anything, it is that corruption starts with ‘yes-men’ and women,’ Caroline wrote in a previous essay.

‘[They] are cronies who create an echo chamber of lies and subservience to maintain their proximity to power. We’ve seen this ad nauseam with Trump and his cadre of high-level sycophants’. While Caroline has defected to the Democrats, her older brother, Andrew, is more in lockstep with their dad. He currently works as the Public Liaison Assistant to President Trump. The siblings are pictured with their dad and mom as children in the 1990s

Caroline – who describes herself as ‘a filmmaker in the LGBTQ+ community’ – is one of two children Rudy shares with his ex-wife, Donna Hanover.

But while Caroline has defected to the Democrats, her older brother, Andrew, is more in lockstep with their dad. He currently works as the Public Liaison Assistant to President Trump.