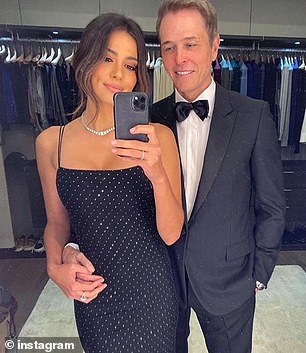 The engagement between Pia Miller and Whitesell, 55, was announced in an Instagram post, in which the Chilean-born actress flaunted her large diamond ring.

In the picture, Pia and Whitesell held onto glasses of sparkling wine and shared a celebratory toast in front of a vista in Malibu, California.

The couple’s latest step comes after the 14-year marriage between Whitesell and Lauren Sanchez, 50, crumpled last year and she began her relationship with Bezos around January 2019. A bombshell report by the National Enquirer reported the relationship between Jeff Bezos (left) and Lauren Sanchez (right), who were both married at the time Whitesell and Sanchez finalized their divorce in October 2019, and speculations that she had become engaged to Bezos began in February 2020.

The reported engagement was reported amid a contentious defamation battle between Bezos and Sanchez’s brother, Michael Sanchez.

Michael accused Bezos and his security consultant, Gavin de Becker, of defaming him by falsely telling journalists that he was responsible for leaking nude photos of the Amazon founder to the National Enquirer.

In a court filing, Sanchez was referred to as Bezos’ ‘current fiancée.’ American Media Inc., the National Enquirer’s publisher at the time, put out a public statement saying that it was Michael – a talent agent – who tipped them off to the affair and ‘provided all the materials’ for the investigation.

Michael claimed in his lawsuit that he helped the story in an effort to control the narrative about his sister’s relationship. He also denied sharing the ‘graphic, nude photos’ to the National Enquirer.

Bezos said in court filings that he never accused his girlfriend’s brother of leaking the nude photos. While Lauren Sanchez did not release a statement for the trial, her lawyer previously said in a statement that Michael had committed a ‘deep and unforgivable betrayal’ by giving her information to the tabloid While Lauren Sanchez did not release a statement for the trial, her lawyer previously said in a statement that Michael had committed a ‘deep and unforgivable betrayal’ by giving her information to the tabloid.

Meanwhile, Whitesell was first linked to Pia in August 2019 and the couple made their public debut at a Halloween party in Los Angeles that year.

Their relationship became ‘Instagram Official’ last Christmas Eve, sharing a loved-up photo with Whitesell outside of the Louvre in Paris, and captioning it ‘P²’.

They made their red carpet debut at this year’s Academy Awards held in Los Angeles in February. Before their split, Patrick Whitesell (left) and Lauren Sanchez (right) were married for 14 years with two children Their relationship became ‘Instagram Official’ last Christmas Eve, sharing a loved-up photo with Whitesell outside of the Louvre in Paris, and captioning it ‘P²’

Whitesell is the CEO of Hollywood talent agency WME and represents the likes of Ben Affleck, Matt Damon and Hugh Jackman.

He is worth an estimated US$440million, according to Forbes, and shares to children with Sanchez: 13-year-old Evan Whitesell and 11-year-old Eleanor Patricia Whitesell.

Pia is also a proud mother to sons Isaiah, 17, and Lennox, 13, who she shares with former partners.

With the coronavirus pandemic prompting international border closures, Pia had been living in Sydney while Whitesell is based in Los Angeles.

However, they reunited five days ago in California, according to Pia’s Instagram.

Before that, the couple last came together in September, when Whitesell visited Pia at her new home in Sydney’s Bondi.  Speaking to Now To Love in March, Pia said she went ‘back and forth between Los Angeles and Australia’ prior to the outbreak of the killer virus.

Preferring to not speak in great detail about her private life, Pia, hinted at FaceTime being the secret to keeping the spark alive.

‘[I have] friends and family that live all over the world… let’s just say FaceTime has really gotten a run for its money recently!’ she revealed coyly. Woman pushed to the rails when the train arrived and actor beaten: violence unleashed in the New York Subway | The State “It did not cross my mind to resign for him”: Josep María Bartomeu spoke for the first time about the Messi case | The NY Journal