Villagers attack seven elephants with flaming torches and arrows after they damaged their crops in India: Terrified animals suffer burns and other injuries, including one that lost an eye

A mob of furious villagers attacked seven elephants with flaming torches and arrows after they damaged their crops in India.

The angry crowd chased the jumbos after they damaged crops in search of food in Thuramukh village, Golaghat district of Assam state.

Officials said the elephants were resting in a tea garden when the mob struck the helpless creatures with arrows and stones on Sunday just after midnight.

Some of the jumbos fled while others were cornered and suffered burns across their leather skin. Seven jumbos were reported to have been hurt in the incident.

One of the elephants was pelted in the eye and lost its vision. Others sustained bruises and swelling on their heads and legs from being hit by the missiles. 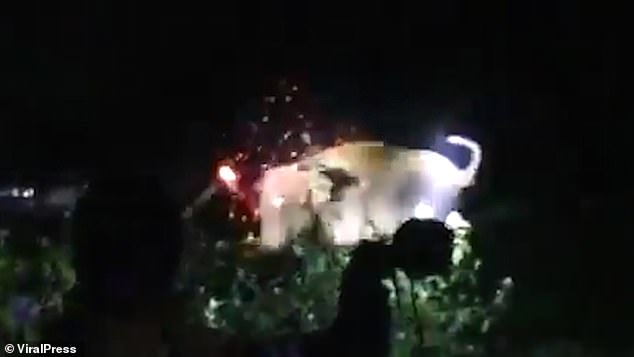 Golaghat Divisional Forest Officer Bhaskar Deka said park rangers tried to stop the angry villagers but even the personnel trying to mediate were hit with stones.

Police and wildlife officials are now searching for those involved.

The forest officer said: ‘The villagers pelted stones at the forest personnel. If people had let the elephants take shelter for the night in the tea garden instead of attacking them, this would not have happened.

‘If the public does not cooperate, it is next to impossible to control such a situation.

Environmental group Wildlife Portal Of India added: ”We strongly feel that what happened to this herd is highly unfair. They are invading human settlements for food and water only and that too is because we’ve destroyed their home.”

The mob reportedly became furious with the herd after they foraged in their crops for over three months and destroyed their harvest.

The jumbos have devoured the crops in more than 20,000 hectares of paddy fields in the area near the Doigrung river. 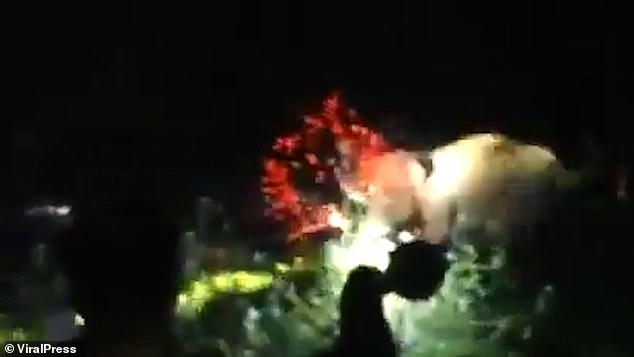 The herd of jumbos devoured fields  in the area nearby to the village. Villagers said they had tried to resolve the issue with local authorities before attacking the herd

Residents claimed that they have reported the problem to local officials but they have failed to control the animals until the angry mob attacked.

The local police said they are now searching for the people who were part of the mob, but no arrests were made so far.

Human and wildlife conflict had increased in the past two years in Assam caused by the reduction in forest density. Wild animals are forced to invade the community in search of food.

In Golaghat district, about 20 elephants and 15 people have died from the conflict in the last two years.