The drink, which has long been considered a national in England, was once drunk exclusively in high society, merchants made fortunes on it, and maids agreed to receive a surcharge “for tea” in excess of their salary.

How tea got to England

Although the Dutch and Portuguese merchants were the first to bring tea to Europe, it was the British who made it the national drink. It happened like this: Charles II, who married the Portuguese princess Catherine of Bragana in 1662, received several pounds of tea and a wife who indulged in this drink every day. The ladies of the court immediately adopted her habit and began to gather for beautiful tea drinking, eventually developing strict etiquette: only the hostess of the house could pour tea, sugar could be taken with special tweezers, the tart taste should be softened with milk. They also took care of the fate of thin porcelain dishes: so that it would not crack from a hot drink and not darken from brown color, milk was first poured into the cup, and only after that tea. This rule was changed much later by George Orwell, who wrote “11 golden rules of tea drinking”, which established a new order – first tea, then milk.

Where does English tea have sugar? took

In China, such a combination as tea and “sweetener” was not known at all. Common dried green tea leaves were brought to Europe, from which green tea with a mild taste was prepared. But the long journey by the sea spoiled the raw materials, turning them into a moldy mass. Therefore, before shipment, the tea leaf was not just dried, but fried, which made it dark brown, but kept well on the road and gave the drink a special tart, bitter taste. The bitterness of the new drink was removed with sugar. There is evidence that tea was used as a remedy. Surprisingly, and now we buy tea, not suspecting that each brand is fraught with a whole history of the drink! So, the name Typhoo is a distorted Chinese daifu, “doctor”. The equally popular PG Tips brand tea stands for Pre-Gestive Tips (option – Pre-Gestee Tips), that is, “tea that improves digestion.” 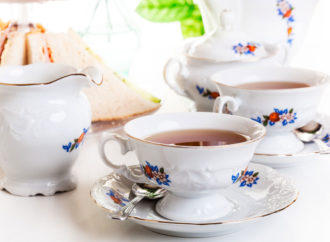 How the smugglers cheated the state

In the 17th century, tea was a state monopoly that brought in huge profits. However, the enterprising English quickly came up with a hundred and one means of smuggling, the center of which was Cornwall. Local fishermen, under cover of night, brought in bags of tea leaves and transported them deep into the island along underground passages, hiding them in the most unexpected places, for example, in a church (of course, not without the knowledge of the local priest).

Local women were “pregnant” with tea through one – the false belly was a fairly safe way of delivering the product, as it aroused little suspicion.

Not without smugglers and on the east coast of England, where smuggled from Holland and Scandinavia was delivered. Caught criminals were severely punished. If you walked along the Docklands canals, then you probably passed those places where public executions of one or two guilty ones were carried out annually: at low tide they were chained to the canal wall, and after a few hours the unfortunate person was flooded with water. After low tide, the corpse could be lifted and buried. It was not punishment that helped to end smuggling, but the 1784 Act, which lowered the tax on imported tea from 116% to 12%. The smuggling became unprofitable, and the merchants took the official route. Drawing on an antique tin of Dalu Kola Tea from HUDSON SCOTT & SONS. Photo from the collection of the author

Why additives in tea mixed

Another problem remained: the tea was so popular that willow and thorn leaves, licorice and even dried leaves of already dormant tea were mixed into it! All this mixture was sold at fabulous prices, since in the 18th-19th centuries, tea was still considered a status product, not available to everyone. Gradually, the supply of tea became so large that the price of the product fell. And its quality was influenced by the Food and Drug Administration Act of 1885, which imposed high fines for blended tea. 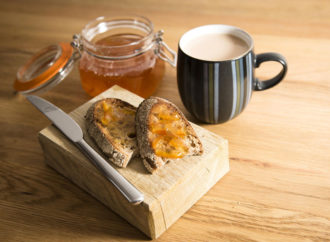 How tea fought against social evil

Already in the 18th century, maids who took a job made it a condition, in addition to their salary, to receive money “for tea” – the very tips that we still give to service personnel for well-performed services.

Adults and children drank beer and ales instead of water

The popularization of tea establishments and tea itself was especially important in the cities and localities where the factories were located. With the help of tea, they tried to combat alcoholism, widespread among workers – tea began to play a social role, replacing stronger drinks. Tea advertisement from The Illustrated London News, 1894. Photo from the author’s collection

In addition, the water in the cities was “rotten”, adults and children drank beer and ales, which were safer in terms of hygiene, but addictive. Alcoholism became a menacing phenomenon, so tea was truly a deliverance from many evils. And if in the 17th and 18th centuries tea was the drink of kings and nobility, in the 19th century – of the wealthy strata of the population, then in the 20th it became very democratic and generally accessible. Tea firmly entered the English culture, giving rise to a large number of sayings and catchphrases about it as a source of vigor of the body and peace of the heart, and in Russia they said: “Drink some tea, you will forget the melancholy!”