A beloved North Texas nurse who came out of retirement to help teach aspiring frontline workers in the midst of the pandemic has died from the coronavirus.

She had retired from the North Texas Job Corps in January after more than 30 years.

The 70-year-old nurse contracted COVID-19 while teaching in a class, tested positive for the virus on October 14 and was hospitalized just three days later. The 70-year-old nurse contracted COVID-19 while teaching in a class, testing positive for the virus on October 14

She died on November 14, her family shared in a GoFundMe for the nurse’s medical bills and funeral expenses.

Her family takes comfort in knowing the loving nurse – who dropped out of highschool before getting her GED and degree from New York City College in 1984 – was helping others in her final months.

‘She was doing what she loved,’ Selene Meda-Schlamel, Meda’s daughter, said to NBC DFW. ‘Despite the risks, she was living life to the fullest. On her own terms at the time. Trying to prepare future nurses for this country.’

Meda-Schlamel added: ‘One of the reasons she wanted to be an educator, specifically in nursing at this time, the reason she came out of retirement to pursue it was because of the pandemic. She wanted to train other frontline workers to help in this crisis.’

Meda’s daughter described her mother as being patient with those who struggled in her class and with the material. She was teaching both college students and high-school students earning dual-credit. She died on November 14, her family shared in a GoFundMe for the nurse’s medical bills and funeral expenses The GoFundMe has raised more than $15,000 for Meda’s family

‘She would say how she could pick out the ones who were struggling and she would stay after with them and give them a helping hand because she had received so much encouragement in her life,’ Meda-Schlamel said.

When Meda contracted the virus, her concerned students sent ‘get well’ cards and other well wishes to the teacher.

But soon, Meda’s condition worsened and she had to be placed on a ventilator. Her daughter and her 75-year-old husband were allowed to spend Meda’s final moments with her in the hospital. 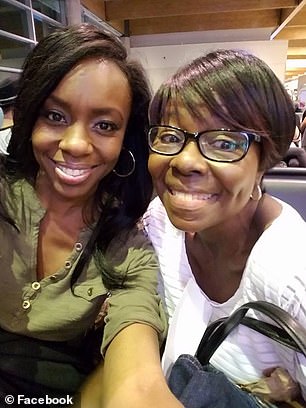 ‘Just to see this amazing, vivacious woman… so willing to put her life on the line to help others so they could then help others, to see her languishing there,’ said Meda-Schlamel. ‘It was such a tragedy.’

As of Monday, Texas has more than 1.1million confirmed cases of the virus. Some 20,588 people have died, according to the state’s Department of State Health Services.

Meda-Schlamel stressed that people should be prepared for the worst even if they make it to the hospital.

‘Just because you make it into the hospital in time doesn’t mean that you’re going to immediately get all of the treatment because of the hospital’s own protocol, plus the overcrowding and shortness of staff,’ she said.

‘On behalf of our Board of Trustees, students, faculty and staff, we extend our deepest condolences to the Meda family,’ he said. ‘Professor Meda’s family shared that she was honored to serve as an instructor at Collin College, and we are sincerely grateful for her service to our students.’