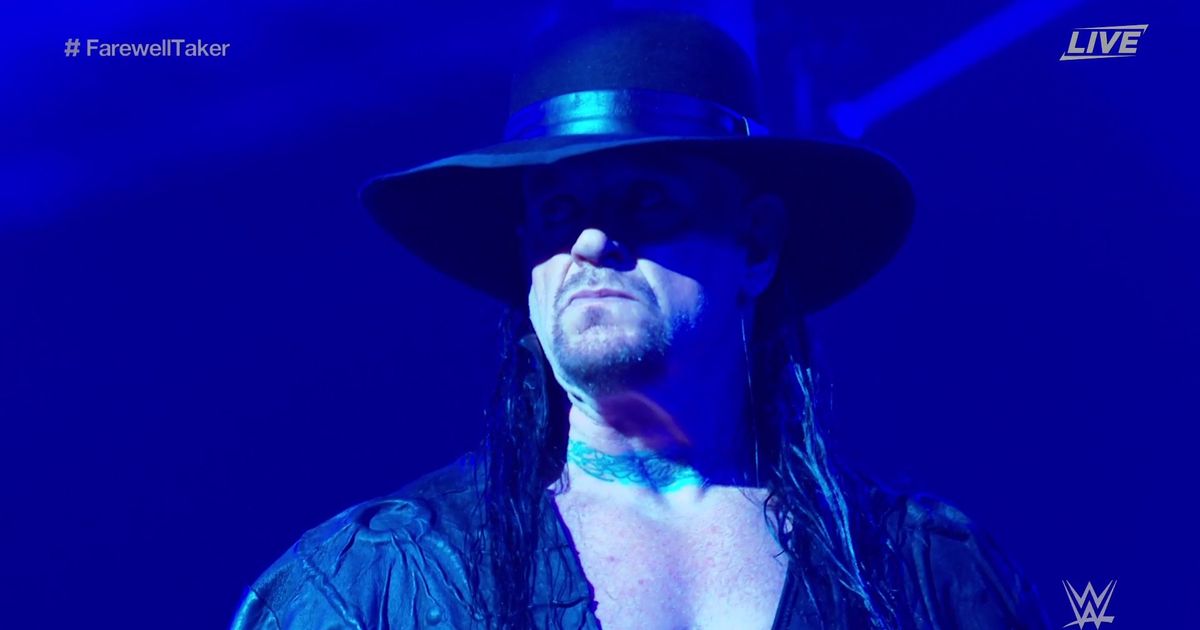 
The Undertaker said goodbye to WWE fans at Survivor Series – 30 years after he made his debut at the event.

In an incredible career he earned seven WWE world titles and went 21-0 at WrestleMania with the famous undefeated ‘Streak’.

But more than that, he wowed fans across the globe, earning their respect with amazing matches and arguably the greatest character in wrestling history.

For many viewers he was the bridge between their childhood love of the then WWF and the global juggernaut Vince McMahon’s WWE has become today.

However, nothing lasts forever and he bade a picture perfect farewell at the Amway Center in Orlando, Florida after the evening’s matches had concluded.

Announced as the Undertaker’s ‘Final Farewell’, first a string of legends who have shared the ring with Taker made their way down to the squared circle in a fitting touch of respect.

No one will ever forget Foley’s Hell in a Cell clash with The Phenom in 1998, or the back to back epic WrestleMania matches with HBK at WrestleMania 25 and 26.

But the list was also notable for the inclusion of several members of Taker’s backstage posse, the Bone Street Krew, including The Godfather, The Godwinns, Savio Vega and Rikishi.

After a Metallica-backed compilation video showed the highlights of his amazing career, WWE chairman Vince McMahon stood in the ring alone.

He said it was the end of an era that would never be duplicated and added: “Tonight, we say goodbye.”

Then, as only he can, McMahon introduced the Demon of Death Valley one last time.

He said: “They say nothing lasts forever. I think they are wrong because the legacy of The Undertaker will live on eternally.

“So now I give you the Deadman, the Phenom, ladies and gentlemen, The Undertaker.”

Undertaker made his epic entrance, as the bell tolled, thunder and lightning struck.

The famous “Un-der-taker” hockey chant rang out when he reached the ring and brought the lights up.

He then had a message for the fans: “For 30 long years, I’ve made that slow walk to this ring and have laid people to rest time and time again.

“And now my time has come.”

As “thank you, Taker” boomed out, he intoned: “My time has come to let The Undertaker rest in peace.”

Then, in a moment which had fans around the world in tears, he dropped down to one knee and struck his iconic pose, before a hologram of his late, great manager, Paul Bearer, appeared above the ring.

Bearer, real name Bill Moody, who passed away in 2013, held out the famous urn with which he used to control The Phenom, and called out to Taker one last time in his unimitable voice.

The bell tolled again and Taker’s music played, before he got to his feet, made the throat slash gesture.

He then slowly made his way from the ring to the stage, where he held up his fist and headed to the back.