Lena Dunham opened up about her painful battle with infertility in an emotional new essay for Harper’s magazine, detailing the great lengths she went to to try to carry a baby while suffering from complications of endometriosis — and how she has ultimately had to come to peace with the fact that she will never be pregnant.

Her candid and heart-wrenching essay has struck a chord with other women struggling with infertility, with many praising her for shining a light on the complicated emotions involved.

But not everyone approves of the 34-year-old’s take: Some have since taken to Instagram and Twitter to complain about her ‘privileged perspective,’ accusing her of being ‘judgmental’ and mocking the ‘IVF Warriors’ who are still doing everything they can to conceive.

Candid: Lena, 34, wrote an emotional essay for Harper’s about her painful battle with infertility Tough stuff: Suffering from endometriosis, she underwent a hysterectomy at 31 and tried to harvest eggs from her one remaining ovary

While reflecting on having her cervix, uterus, and an ovary removed due to chronic endometriosis in 2017, the actress admitted in the essay that she became ‘obsessed’ with becoming a mother.

‘The moment I lost my fertility I started searching for a baby,’ she began her article, noting that she was only 31 years old when she underwent a total hysterectomy.

‘I became keenly obsessed with it,’ she recalled of her sense of urgency. ‘Bedbound and tending to the five small laparoscopic holes in my abdomen, I scrolled through adoption websites as if they were furniture outlets.’

Three years later — and after a rehab stay for an addiction to benzodiazepines — the Girls creator revealed she was still exploring adoption when a doctor said she ‘might have a chance of harvesting eggs’ with her remaining ovary.

‘It turned out that after everything I’d been through — the chemical menopause, surgeries by the dozen, the carelessness of drug addiction — my one remaining ovary was still producing eggs,’ she recalled of her initial excitement.

If her eggs were successfully harvested, they would ‘be fertilized with donor sperm and carried to term by a surrogate.’ Painful journey: Her IVF was unsuccessful, and she was left heartbroken about being unable to have biological children she desperately wanted

The process, however, did not work, and Lena recalled learning that none of her ‘eggs were viable on Memorial Day, in the midst of a global pandemic.’

At the same time, she was navigating three of her close friends becoming pregnant, leaving her to wonder about ‘how far you can drift from yourself in the process of trying to get what you want.’

‘There is a lot you can correct in life — you can end a relationship, get sober, get serious, say sorry — but you can’t force the universe to give you a baby that your body has told you all along was an impossibility,’ she said.

Through all of this, she became immersed in online communities of other women who were struggling to conceive, who call themselves ‘IVF Warriors.’ Angry: The response to her essay has been largely positive, but some critics have called her ‘disgusting’ and ‘self-absorbed’

Since the essay was published on November 16, many commenters have applauded Lena, thanking her for shedding light on some ‘really painful stuff.’

‘Thank you for writing this. It’s a story many of us share,’ wrote one.

‘Thank you for articulating what is such an isolating and horrific experience. I also got off the fertility treatment train. It’s a massive decision and one not many understand,’ tweeted another.

‘I understand the struggle and the feeling of longing, and sheer failure in ur own body, and sense of failure. I’m still waiting 4 acceptance that I’m afraid may never come. There’s a few of us out here, do reach out 4 support,’ wrote yet another.

But some women still struggling with infertility themselves are furious with the star, accusing her of mocking other women and calling her ‘self-absorbed’ and ‘disgusting.’

‘This is so unnecessarily hateful and condescending to other women going through what is essentially the same scenario you’ve experienced. It’s pretty self-absorbed and honestly disgusting,’ tweeted one woman.

‘Please for the love of god do not judge fertility medicine or the women seeking it based on Lena Dunham’s take on IVF. What a shallow and empathy-free take on the experience of millions of women,’ complained another. Worked up: They’ve accused her of mocking the ‘IVF Warriors’ she followed on social media, calling her ‘bitter’ and ‘judgmental’

‘While I have empathy and respect your journey, I don’t understand why you felt the need to put down other women. Your article has a angry and bitter tone, and as one of the “IVF warriors” you judged and made fun of I hope someday you can see how awful it was to say those things,’ tweeted one more.

A third said: ‘As both an #IVF mother who struggled with #infertility and a writer, I‘ve been trying to find the words on how this article made me feel. While I always appreciate when someone with a platform highlights #fertility, this one felt particularly hurtful.’

Millie Brooks, a 35 year-old woman from the Bay Area, took to Instagram to share a dramatic photo of herself holding a letterboard with the message: ‘Lena Dunham is not my voice.’

‘While I’m grateful for the awareness the article has brought to the Childfree community, Lena Dunham’s depiction of the IVF community was incredibly hurtful and captious,’ she said in the caption.

‘Her privileged perspective and her emotional masterbation song (that masquerades as a Drunk-A-Logue) does not represent all of us. And she is not my voice.’

One of her ‘biggest issues’ with the article includes Lena’s description of scrolling through adoption sites.

‘I know only a little about the adoption process, but what I do know is that adopting a child should NEVER — I repeat — NEVER be compared to buying a piece of furniture, a house, or even adopting a pet for that matter,’ Millie raged. ‘Human trafficking is still a thing, Lena, and the history of adoption in this country is f***ing dark. (Did you do your research?) For shame.’ 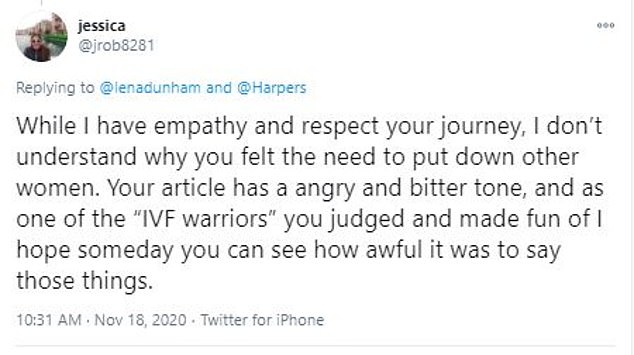 She was also not a fan of Lena’s passage about IVF Warriors. Though Lena admitted to being a frequent reader of their content, Millie interpreted her writing on the subject as taking on a ‘judgemental [sic] and mockery quality.’

‘It affects EVERYONE (BIPOC & LGBTQ+) and she dropped the ball on this topic,’ she went on. (Lena does, in fact, address this topic, noting that white women are five times more likely than women of color to undergo fertility treatment.)

Finally, she complained that Lena’s ‘overall tone was bitter’.

‘She clearly is still grieving the loss of being a mother and she’s kicking and screaming about it on a global stage,’ she wrote.

She went on to claim that ‘having a baby goes against everything Lena Dunham represents and stands for’ — something Lena herself has never said — and accused her of being ‘mad that she even WANTED it.’

‘Personally, I feel like she just took a bunch of jabs at me and the community that saved my life,’ she concluded.

Millie’s commenters are in agreement, with some calling Lena’s essay ‘infuriating’ and saying it made them ‘sick.’ Open: Lena went into great detail about her emotions while struggling with infertility

‘I deeply do feel sorry for her pain and grief, but she has never been my cup of tea and this article reconfirmed why I don’t like her,’ wrote one.

‘I felt anger and disgust reading it. We’re not quite to the IVF stage yet but it’s a likely possibility. I don’t like the way she took her pain and turned it to hate towards a community of women.’

‘I am still fired up over the article. She was posturing, privileged and made references that were disrespectful, and dismissive in this community I have been in and advocating for for 10 yrs,’ wrote another angry commenter.

‘She is bitter and angry (understandable bc it was her health that led her to IVF), but the way she chose to describe the community was very “matter of fact” without actually knowing what she was talking about. She’s an a**hole.’

‘This was not the way to shed light on such an already taboo subject to continue to make those of us in this community to feel belittled is absolutely the wrong way to do so,’ said a third.

What is endometriosis, and how does it cause fertility issues?

Endometriosis is an often painful disorder in which tissue similar to the lining of the uterus – the endometrium – grows outside the uterus.

It most commonly affects the ovaries, Fallopian tubes and the tissue lining the pelvis.

The primary symptom of endometriosis is pelvic pain although many women also experience cramping during their menstrual cycle.

Often misdiagnosed, many women only discover they have the condition during infertility treatment.

Approximately half of women diagnosed with endometriosis have difficulty getting pregnant, and some choose to undergo an oophorectomy to remove their ovaries, and/or a hysterectomy to take out their uterus in order to relieve the pain caused by the condition.

While studies about the link between endometriosis and miscarriages are still ongoing, newer research suggests that the condition can leave sufferers at greater risk of having a miscarriage.