Some 600 sorority students from the University of Alabama in Tuscaloosa are set to party hard on Tuesday night despite the raging coronavirus pandemic, though organizers of the event are planning to have revelers come in ‘shifts’ of 200 each.

The Kappa Delta house last week received a special events retail license after the Tuscaloosa city council voted to allow a ‘farm party’ to go ahead at a venue called Black Warrior Farms.

DailyMail.com has reached out to Kappa Delta for comment.

The ‘farm party’ is an annual event held by the sorority, according to the Franklin Stove Blog, which was the first to report the city council vote last week. The event is scheduled to take place at Black Warrior Farm, a 14-acre venue in Tuscaloosa Since the university’s sororities do not have the adequate facilities to stage large-scale events, Greek organizations need to move them off campus.

The party planners, a company called Special Events Management, told city council members that it will shuttle partygoers in shifts of three – or 200 people per group.

They will attend the outdoors event for two hours at a time, though before entering they will have their temperatures checked.

All attendees are expected to wear masks.

The council voted 4-2 in favor of allowing the event to go ahead.

‘I want to make sure that the council understands that this is not a group of 600, 800 or 1,000 people at the event at one time,’ Casey Johnson of Special Events Management told council members.

‘This will be done in shifts. So we will have essentially a six-hour party. The party will be held just 12 days after Governor Kay Ivey (right) and Alabama Health Officer Dr. Scott Harris (left) announced that a statewide mask ordinance would be in effect through December 11

‘They will sign up for three different shifts. They will load up on a bus.

‘They are not allowed to come in any other way to the venue.’

The city council voted to allow the party to be held at the 14-acre farm. Plans call for several buses to transport the students from the campus to the venue, which is six miles away.

The party planners said the large size of the farm – 14 acres – will enable the students to physically distance themselves.

But health experts were outraged.

‘The four members of the city council who voted in favor of this are sanctioning a superspreader event.’

Manos added: ‘This will be worse because of the college students who will be… drinking and dancing.

‘These party-goers will be going home for Thanksgiving next week and possibly taking COVID home to elderly relatives.’

Cynthia Almond, the city council president, and councilman Lee Busby were the only two to vote against the party.

‘I have a real concern about the ability of these kids, these young adults, to socially distance,’ Almond said.

Busby told The Daily Beast that having 600 students booze it up at a massive party in the middle of a pandemic ‘just struck me as not a good idea.’

‘The organizers of the party did do a good job of presenting all the precautions, so I understand the impact that had on the collective vote, but I just didn’t think it was a good idea that had to happen right now.’

The university told The Daily Beast that ‘has required the chapter to follow extensive rules and safety guidelines.’ 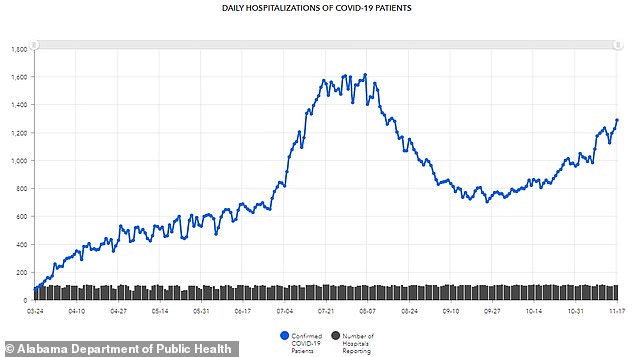 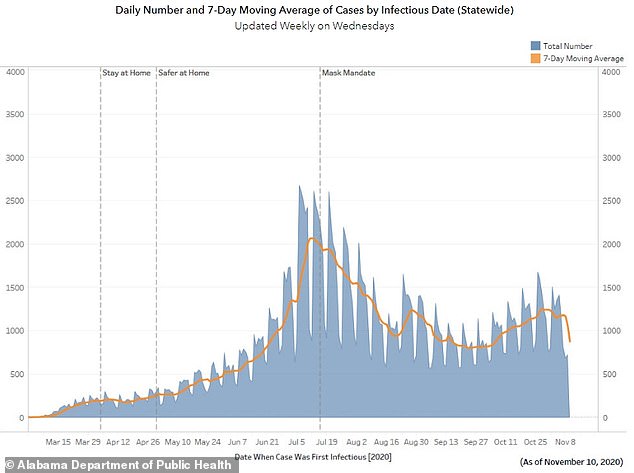 The school said it will require ‘a 30-minute pause between each group’s arrival/departure’ so that planners will have to time for ‘cleaning/sanitizing of tables, chairs and overall venue.’

Buses will also be allowed to ferry students at just 50 per cent capacity, according to the university.

The city council approved the party despite the fact that Alabama is currently in the midst of an alarming surge in COVID-19 cases – so much so that Governor Kay Ivey recently extended a statewide mask ordinance.

More than 2,000 new cases of COVID-19 have been added daily over the last week across Alabama as hospitals treat more and more people suffering from the illness caused by the new coronavirus.

In Tuscaloosa County alone, there were 11,949 cases of COVID-19 as of Tuesday. Thus far, 149 county residents have died of the disease.

With caseloads on a steady rise since November 8, the rolling seven-date average of new cases reached 2,040 on Tuesday, a slight improvement from a day earlier, statistics showed.

Virus-related illness is at its highest point in the state since August.

The pace of deaths has increased since late October as the state’s death toll rose above 3,300 people, and nearly 1,300 people are hospitalized, the most in three months.

With a statewide mask order already in place through December 11 but occupancy limits dropped in order to help the economy, the Business Council of Alabama announced it was starting a campaign to oppose a shutdown similar to what happened in the spring.

‘BCA encourages Alabamians to follow all health guidelines and orders. COVID-19 poses a serious health threat to our citizens and communities. Personal responsibility and buy-in is needed to Keep Alabama Open,’ the organization said in a statement. Ivey, who has repeatedly stressed personal responsibility in combating the virus, has ‘absolutely no intentions to close businesses,’ said spokeswoman Gina Maiola.

‘The governor appreciates this effort by the business community to partner with her as she works to make this a reality,’ she said.

While COVID-19 causes only mild or moderate symptoms in most people, it can be deadly for the elderly and people with other, serious health problems. Are the 5 worst foods to fight belly inflammation | The State How much money does actor Will Smith have? | The State