An unofficial high school Homecoming party in Missouri as become a superspreader event infecting at least seven people as parents and students refuse to cooperate with local health officials in contact tracing.

A group of parents from Rolla High School organized the party for 200 people on November 7 at Matt’s Steakhouse, where social media posts showed students in formal wear but with a lack of masks or social distancing.

However, the local health department has been unable to assess the true impact of the spread of coronavirus through the event as the organizers engaged in a deliberate campaign to keep details from contact tracers, according to the Daily Beast.

Rolla High School has now been forced to return to full virtual learning from next week as cases among students and staff increased dramatically since the event.

It is not known, however, if the rise in cases is linked, as contact tracers have been unable to find out who was in attendance.

A group of parents from Rolla High School organized the party for 200 people on November 7 at Matt’s Steakhouse, where social media posts showed students in formal wear but with a lack of masks or social distancing. The event is now linked to seven coronavirus cases According to The Kansas City Star, the school announced on Wednesday that that 10 students and one staff member had tested positive for COVID-19.

In an email to staff and parents sent Thursday night, Craig Hounsom, Superintendent of Rolla 31 School District, revealed they had been forced to close after ‘a sharp increase in COVID positive cases, high numbers of student quarantines due to internal and external contacts, high school absentee rates due to sickness, and the increasing number of quarantined staff members’.

The Homecoming dance was described as a ‘parent-organized’ event and the school was not affiliated with it.

While there have been seven cases linked directly to it, some of the new cases among other students and staff may have occurred as a result.

The list of people who attended was kept secret in an attempt by the organizers to avoid contact tracers if an outbreak happened in the aftermath.

Ashley Wann, health director of the Phelps-Maries County Health Department, told The Daily Beast that they had been told by ‘community members and those in attendance’ that identities had been deliberately hidden.

This was highlighted in a Facebook post from one parent who claimed that although their child was not in attendance, they would not be helping with the contact tracing, the Daily Beast reports.

‘I’m sorry, but if you’re OK with your kid ratting other kids out to the health department for attending a private event, you are the bigger problem… SMDH SOCIALISM,’ she wrote. ‘I don’t have to answer any of their questions. F#%* them.’

‘This is how it all starts,’ she continued. ‘Dividing, labeling. Your home raided in the middle of the night. Don’t think it could happen here? Think again. The difference is, our citizens are armed, according to their constitutional rights.’

Wann said that she is not confident in her department’s ability to find all the cases that emerge from the dance as it’s believed some attendees will refuse to report symptoms or refuse to get tested.

It’s also feared that some attendees who were infected and asymptomatic will not have quarantined and will spread the virus to others who were not in attendance.

Yet without knowing who those attendees are, it will be impossible to trace back to the point of infection. While teens are not as susceptive to severe illness from the virus as other people, there is still the risk of them passing it on to the more vulnerable.

This was seen with the now infamous wedding in Maine in August that led to the deaths of at least seven people who were not in attendance and infected almost 200 more.

‘We know that we will not be able to obtain a true picture of the impact this event had on our community,’ Wann said.

‘Unfortunately, there will be individuals that will be untruthful and intentionally withhold information, which is not unusual to contact tracing in general.’

She also revealed that ‘individuals that we have been in contact with all report no masks were worn and that masks were made optional by the event organizers’ leading to further fears of increased spread in the community.

The only traces of the dance were in now deleted social media posts and a Snapchat message published by the Daily Beast that asked for help from other parents in organizing. According to the Daily Beast, the main organizer was local parent Cory Coates, pictured left with her husband Aaron, who posted about the dance on Facebook last week Several of the social media posts were tagged in Matt’s Steakhouse with captions such as: ‘Had to get one last party in before we go back to lockdown.’

According to the Daily Beast, the main organizer of the event was local parent Cory Coates who wrote about it on Facebook.

‘So, my friend and I did a thing yesterday,’ she said. ‘We did a REALLY big thing. And we had a lot of support. And a lot of help. And a lot of happy kids. And it was kind of amazing.

‘And I really want to recognize and thank these people, but I can’t. But my heart is full, and I think the kids are happy and it was worth it. I would do it again. I’m happy and sad at the same time and I want normalcy. I think we delivered this for one night. #HOCORHS2020.’

She told publication that she was ‘not going to respond to accusations’ when asked about attempts to keep the attendees secret but admitted that ‘the event was planned following what the HS typically does at dances’.

‘A list of students who attend is not a normal practice for the HS,’ she claimed.

This is not necessarily true as tickets for dances at the school are sold, allowing for some for of tracing who bought a ticket, a teacher from the high school explained. 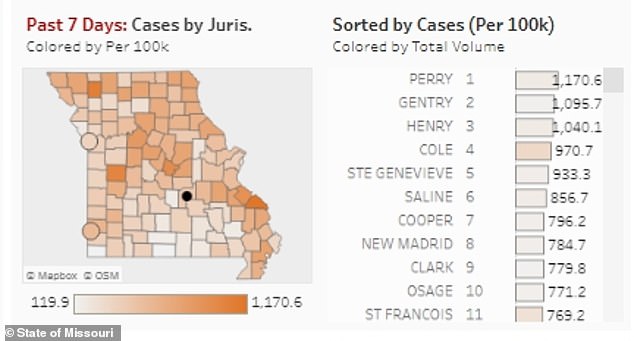 Cases are also rising throughout the state of Missouri, pictured in the past week

Coates told the Daily Beast that there were also plenty of other school events in the week leading up to the dance that could have contributed to coronavirus spread, such as football practice and wrestling tryouts.

‘If you are going to do the article, I do suggest you look into all the HS activities the week leading to the dance and community events,’ she said.

A teacher at Rolla High School who spoke anonymously to the Daily Beast agreed that this was true.

‘She’s not wrong,’ said the staff member. ‘We had football the whole season. The kids came and practiced every day. There were masks and distancing, but you can’t distance that much while you’re playing a sport, so I kind of agree with her on that. But at least at the school sanctioned things, we have protocols.’

‘They’re 15-, 16-, 17-year-olds. They don’t really know better,’ they added. ‘But I’m disappointed in the parents for putting everyone at risk like this.’

The staff member said that even while in school, students refused to wear masks or to put them on properly. There is no mask mandate in the city, but the school district has asked students to wear one.

‘And now we’re going virtual,’ the staff member continued of the decision to close the school building again. ‘They hated it when we went hybrid, but now it’s their fault.’ The issue of a mask mandate has been a problem in the area with Deanne Lyons, a member of the Rolla City Council, telling the Daily Beast that locals have compared wearing one to the Star of David.

‘The night I was sworn in, someone showed up comparing mask mandates to the Star of David,’ said Lyons, ‘insinuat[ing] that the council members were Nazis for having any restrictions in place to prevent the spread of COVID.’

‘That was in June,’ she added. ‘The last meeting had someone citing a right-wing conspiracy website about masks making our lives worse.’

Lyons added that it was ‘bewildering’ to her that parents organized the event and that ‘people really would risk their own children and other people’s children and our entire community for a dance, a dance that could be made up at another time, when this isn’t happening’.

The health department has urged those who attended the dance to quarantine as they fear a further spike in infections.

‘This event has the potential to be a super-spreader event with more cases expected over the next several weeks,’ they warned.

‘Actions and events such as this are reckless and go against all public health mitigation strategies to prevent the spread of COVID-19 and protect the entirety of the community.

‘Due to the magnitude of positive cases and contacts, all case investigation and contact tracing efforts have been forced to focus solely on this event pushing us even further behind with contacting new positive cases.’ Matt’s Steakhouse has claimed that they were not working at the event and that it was solely the parents who organized.

‘We were not participants and did not work the event,’ said the owner on Facebook. ‘Many of our staff do wear masks. It is their choice. Business owners are struggling to find a balance that works for each of them, us included.’

As of Friday, Phelps County, where the school is located, had 1,214 confirmed cases and 34 deaths from the coronavirus out of a population of 44,789.

The county had avoided cases through the country’s first wave, only reporting one case in May, but since June the outbreak out been worsening and rising as the winter months come.

On Monday, two days after the dance, it reported a record 92 cases.

It reported a sixth of its total cases since the start of the pandemic in the last week alone.

Deaths, however, have not increased in the same manner with three deaths on October 26 the peak so far.

Missouri is also experiencing a massive spike in cases with 235,722 in total reported as of Friday. There have been 3,373 deaths to date.

There were almost 28,000 new cases reported in the last week and the new daily average is close to 4,000.

The positivity test rate in the state is 24.3 percent. 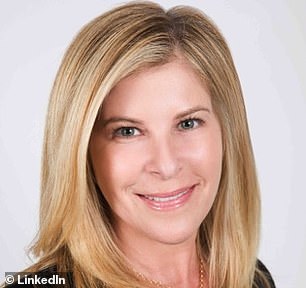