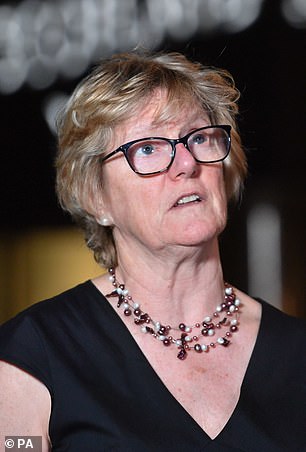 By Katie Feehan For Mailonline

The UK’s former chief medical officer has said thousands of Covid-related deaths could have been avoided if the government had tackled the country’s obesity crisis.

Professor Dame Sally Davies said the country’s high death toll is down to the country’s obesity rate and the ‘structural environment’ which allows junk food adverts and large portion sizes.

Overweight people are more than three times as likely to die of Covid-19 than those of a healthy weight, according to a report from Public Health England published earlier this year.

It also found that people who have extra weight, defined as a body mass index of over 25, are also at higher odds of needing ventilation when ill with Covid-19 by seven-fold.

Prof Davies told the Times: ‘There is a direct correlation between obesity and a high mortality for Covid, and I’m highlighting that, as a nation, one of the reasons we have a problem with our weight … is because of our structural environment to which advertising, portion size, and many other things come into play.’

Davies has urged the NHS to start acting as a preventative body rather than just looking after those who are ill.

The professor, who was known as ‘nanny-in-chief’ during her tenure for her bold public health interventions, said the link between obesity and Covid mortality proves she was right to highlight the crisis in her final report last October.

She told Times Radio’s G&T programme: ‘You only have to look at our prime minister, who believes his weight was one of the reasons his episode of Covid was quite serious.

‘We know if we were slimmer as a nation, and smoked less, we would have less [Covid] morbidity and mortality.’ She added: ‘We accept commercial companies nannying people into eating or drinking or smoking unhealthily.

‘But we don’t accept that we as a nation working together should nudge people and put the same effort and money into nudging people for health.

‘We need a structural system where it’s easy to be healthy.’

In July, Boris Johnson urged the nation to follow his lead after he decided to lose weight following his Covid-19 battle which saw him admit he was ‘too fat’ when he was hospitalised with the virus.

His comments came as he launched the Government’s new anti-obesity strategy which detailed the end of confectionery displays at store checkouts and the ban on adverts for foods high in fat, sugar and salt on TV before 9pm.

The measures are yet to be finalised but could see deals such as ‘buy one get one free’ on unhealthy foods also banned, while alcoholic drinks could soon have to list their calorie content.

Dame Sally, who stood down last October and was succeeded by Chris Witty, pointed to ‘made to share’ chocolate bars and increased portion sizes as evidence of systemic problems.

It comes after earlier this month she said the country was ill-prepared for Covid-19, and government officials told her a coronavirus from Asia would ‘never travel this far’. She told The Daily Telegraph: ‘We didn’t practise how to stop a coronavirus spreading because we were told by Public Health England that the next big one would be influenza, and they didn’t believe it could be stopped.

‘One day we will certainly get another flu pandemic, so we prepared for that, and I think we prepared well.

‘But none of the experts seemed to think a coronavirus would be relevant.’

‘Compared to other countries, we’ve been found wanting.

‘We were not as well prepared as we should have been. I think the public deserves to know everything.’ Naturists make an exhibition of themselves at Paris film library Pupils at £39,000-a-year St Paul’s School have ferried across the Thames in BOATS after bridge shuts