Trump on Monday fired Esper from his high-ranking position via Twitter, and on Friday it was revealed that Esper reportedly pushed back on the President’s withdrawal hopes in the region.

Last month, Trump signaled ahead of the General Election that he wanted the remaining soldiers serving in Afghanistan ‘home by Christmas.’

But The Washington Post reports that Esper’s memo expressed hesitancy towards removing troops amid a variety of factors, including undercutting U.S.-Afghanistan negotiations and the potential fallout on allies.

The memo also reportedly noted ongoing violence in the region, with a watchdog report this month saying attacks by Taliban and other groups grew by 50 per cent. 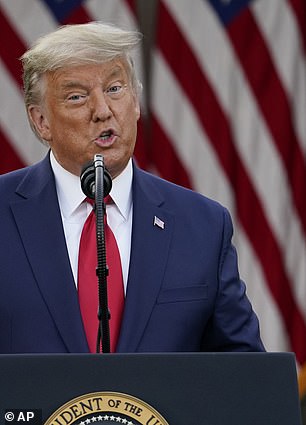 Defense Secretary Mark T. Esper (left) was fired from his position this week by President Trump (right) after the General Election U.S. Soldiers with Task Force Iron maneuver an M-777 howitzer, so it can be towed into position at Bost Airfield, Afghanistan

If the U.S. performed a rapid pull out from Afghanistan, Esper reportedly wrote, dangers could fall on the remaining troops.

The Trump administration in February signed the U.S.-Talban agreement, which included the U.S. gradually removing troops from the embattled region following the September 11 attacks.

As it stands, a full withdrawal was set for April if all conditions were met.

The Pentagon was in the midst of lowering the number of U.S. troops to under 5,000 this month, but negotiations reportedly sputtered and the Taliban launched attacks across Afghanistan.

At least 25 civilians – including the father of Mayor Zarifa Ghafari – were killed during a week in Kabul amid targeted assassinations and a terrorist attack this month.

Sources told WaPo that the relationship between Esper and Trump had crumbled months ago over a bevy of issues.

Some sources claimed that tensions rose from what Trump perceived as military resistance to his administration’s goals, while others denied Afghanistan was a factor at all.

Esper’s firing and uncertainty in the Pentagon came as Washington D.C. navigates the Trump administration’s unwillingness to concede to Biden and their controversial efforts to stay. Colin Jackson, a former senior Pentagon official overseeing Afghanistan in the trump administration, told WaPo he was against a withdrawal right now.

‘We don’t have a single example where pulling the plug has gone well — Vietnam, Iraq. Not one,’ he told the publication.

Another former senior White House official declared that removing all U.S troops from Afghanistan wasn’t viable ‘without crushing the coalition there.’

And Kentucky Sen. Rand Paul, a frequent advocate for Trump, put all his support behind Trump.

‘Reminder to those saying withdrawing troops may cause a “clash” with Generals/Pentagon: there is only one Commander in Chief, it is @realDonaldTrump and when he orders the troops out of Afghanistan, the only proper answer is “Yes sir,” ‘ he wrote on Twitter.

Rand Paul: ‘Reminder to those saying withdrawing troops may cause a “clash” with Generals/Pentagon: there is only one Commander in Chief, it is @realDonaldTrump and when he orders the troops out of Afghanistan, the only proper answer is “Yes sir,”

With just two months remaining in the Oval Office, an exodus sparked with a number of employees fired or choosing to resign from their positions.

In their places, Trump has appointed loyalists who might be more willing to adhere to his withdrawal plans.

Douglas Macgregor, a retired Army colonel who’s advocated for troop removal, was made Senior Advisor to the Acting Secretary of Defense.

WaPo reports that Miller and Patel have both worked extensively with national security adviser Robert O’Brien, who has disagreed with the chairman of the Joint Chiefs of Staff over the plan’s details.

O’Brien said in Las Vegas, Nevada, last month that troop numbers ‘will go down to 2,500’ by next year, but Gen. Mark A. Milley called that ‘speculation’ before adding the U.S. wanted to stop the war ‘responsibly’ and ‘deliberately.’

O’Brien gave a pointed response, saying, ‘When I’m speaking, I’m speaking for the president, and I think that’s what the Pentagon is moving out and doing,’

WaPo reports that Miller has worked with Trump and the national security team ‘on meeting our Afghanistan strategic objectives.’ During discussions with NATO partners this week, a Pentagon spokesperson said Miller ‘consistently assured them of our process with respect to Afghanistan.’

A former senior federal official told WaPo that they believed Trump could order cuts to 2,500. Miller has not publicly shared his opinion, but sources said he wasn’t opposed to a steeper cut like 4,500.

Miller has reportedly told allies that there has been no policy changes and won’t be any unexpected shifts regarding the U.S.’s withdrawal.

The Afghan government told WaPo that had not been informed of any changes to the U.S.’s current withdrawal proceedings.

Local officials have worried that a faster withdrawal timeline could leave them unable to defend themselves.

‘If we didn’t have American airstrikes, the Taliban would be in Lashkar Gah today,’ said Sher Mahmad Akhunzada, a member of Parliament, referring to Helmand’s provincial capital, to WaPo.

A U.S. official told the publication that there was ‘some indication’ that the Taliban ordered against attacking U.S. personnel, but they added the sentiment could change amid a rapid withdrawal. WaPo reports that valuable equipment would likely be left behind under those circumstances.

Retired major general Edward Dorman, who served as U.S. Central Command’s director for logistics from for two years, said some bases and facilities would likely to given to Afghanistan’s military.

Biden said he planned to lower the number of troops by ‘several thousand’ to make sure l-Qaeda and the Islamic State cannot pursue attack against the U.S.

‘President-elect Biden laid out an extensive foreign agenda over the course of the campaign and looks forward to delivering on it once in office,’ said Zalmay Khalilzad, a Biden spokesperson, to WaPo.

Biden ‘firmly believes in the principle that there must be only one president at a time guiding our country’s foreign policy and national security as he is focused on preparing to govern.’ U.S. service members walk off a helicopter on the runway at Camp Bost on September 11, 2017 in Helmand Province, Afghanistan