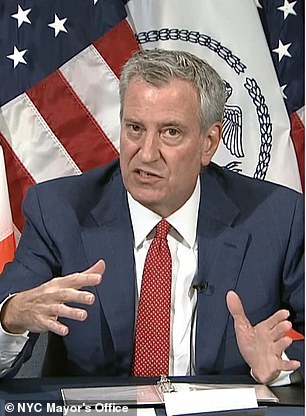 NYC parents are being told to plan for public school closures from MONDAY as the Big Apple hits 2.83% test positivity rate – even though schools only have 0.17% positive test rate

NYC parents are being told to prepare for school closures from Monday because the city’s coronavirus test positivity rate has crept back up to 2.83 percent, even though it is only 0.17 percent in schools.

Mayor Bill de Blasio made the announcement on Friday morning and told parents to ‘come up with a plan’.

‘People should get ready. Parents should have a plan for the rest of the month of November.

‘I think that’s the safe way to think about it, have an alternative plan beginning as early as Monday,’ he said during an appearance on the Brian Lehrer radio show.

De Blasio is expected to face backlash if he moves forward with the plan to close classrooms despite data showing that transmission of the virus in schools has been remarkably low – with a positivity rate of just 0.17 percent.

At the worst of the pandemic, almost 70 percent of the people being tested in New York City were positive with the virus. 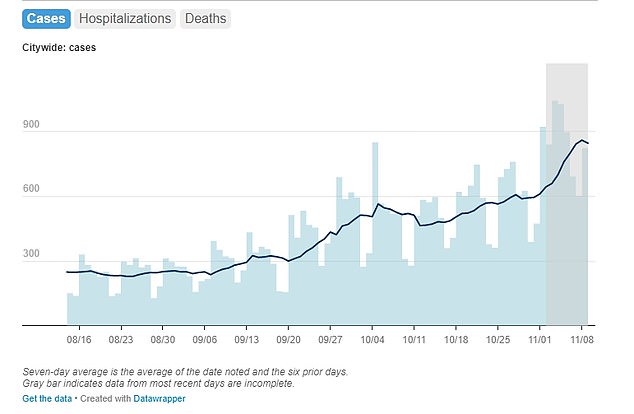 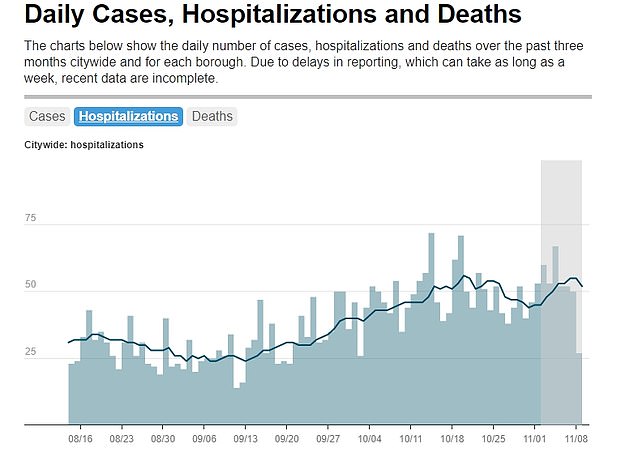 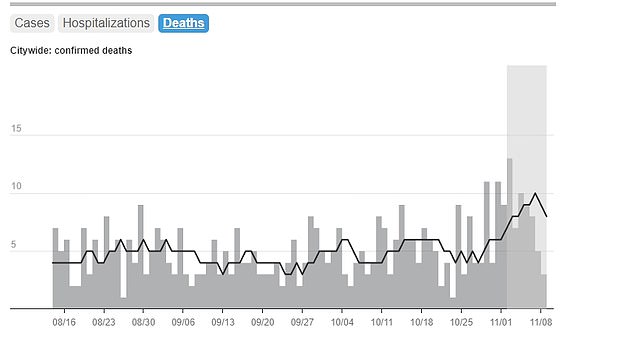 The statewide COVID-19 rate increased to 2.9 percent on Wednesday – the highest it has been for months – fueled by spikes in specific regions shown above

On Wednesday Cuomo ordered that all bars and restaurants across the state must close at 10pm starting on Friday.

He is also limiting gatherings in private residences to 10 people, and said he may reduce the capacity restaurants and bars can have indoors if numbers continue to climb.

Cuomo didn’t say anything about closing schools, however, as a debate rages on about which will take a bigger toll: keeping kids in the classroom as cases climb, or locking them at home where their education could suffer and forcing their parents to stay home to care for them, rendering them unable to go to work.

It is the latest indicator of a looming lockdown.

New York Governor Andrew Cuomo has ordered that all bars and restaurants across the state must close at 10pm starting from Friday in effort to stave off the ‘second wave’ of COVID-19, even though deaths and hospitalizations in New York City are steady.

He is also limiting gatherings in private residences to 10 people, and say he may reduce the capacity restaurants and bars can have indoors if numbers continue.

The statewide COVID-19 rate increased to 2.9 percent which is the highest it has been for months and deaths are increasing in some parts of the state but not all.

In New York City, deaths have been holding steady despite the rising infection rate.

It is a trend being seen across the country; the US has now hit a record number of coronavirus hospitalizations amid the pandemic with nearly 62,000 Americans currently being treated.

There were 61,964 people being treated for COVID-19 in hospitals nationwide on Tuesday, according to COVID Tracking Project data.

But Cuomo on Wednesday issued an order for the entire state and said anyone who doesn’t comply with it will receive a summons ordering them to shut down.

‘Losing money hurts but money can be replaced. Losing a loved one is forever.

‘If the lights are on and people are drinking, they get a summons,’ he said.

It delivers yet another blow to the restaurant and bar industry which was only allowed to resume indoor dining at a 25 percent capacity last month after being ignored for months.