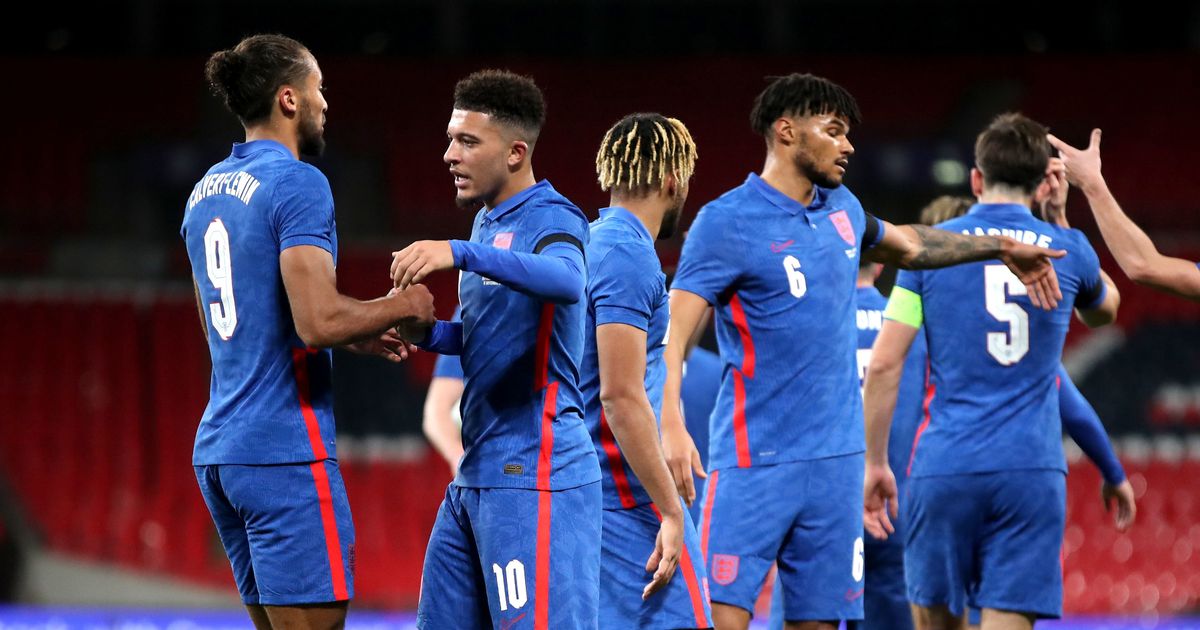 
England were just too good for the Republic of Ireland as Gareth Southgate’s men recorded a comfortable 3-0 friendly win at Wembley.

And it was 2-0 just after the half-an-hour mark as Jadon Sancho cut inside from the left and fired a low shot into the bottom-right hand corner.

Dominic Calvert-Lewin got his second England goal when he converted from the spot ten minutes after half-time to round off the scoring on a thoroughly satisfactory night for the home side.

The Three Lions are next in action when they take on Belgium in the Nations League on Sunday, while Ireland face Wales on the same day.

What a difference a month can make.

Maguire’s last outing in an England shirt came to a premature end after just 31 minutes when the Manchester United defender was sent off in the 1-0 defeat to Denmark in October.

It capped off what had been a miserable spell for the 27-year-old, with things so bad that there were suggestions he should take a break from football to clear his head following his turbulent time off the pitch.

Yet to his eternal credit Maguire has battled back from that difficult period ever since, with his performances for United vastly improving recently.

He was handed the captain’s armband for his country for the first time tonight and put in an assured showing, with a great header to give his side the lead and a decent display at the back showing all his best qualities.

Here’s hoping Maguire has now put his nightmare few months behind him once and for all and will continue his redemption.

Why not Grealish AND Mount?

Much of the build-up to the game centred around who of Jack Grealish or Mason Mount would be selected in the starting line-up.

Yet in the end both players made the cut in Southgate’s 11, with Grealish out wide and Mount occupying the central position in the 3-4-3 formation.

Both looked bright throughout, with Grealish constantly threatening on the flanks and setting up England’s second goal and Mount tidy in possession and dangerous with set-pieces.

In games against inferior opposition, there is no reason why the two cannot play in the same team, and they provide plenty of food for thought going forward, especially when England need to break down a stubborn defence.

Mings shines on and off pitch

Tyrone Mings came out with a huge amount of credit for the way he dealt with the press in the fallout to Greg Clarke’s resignation as FA chairman on Tuesday.

But he let his football do the talking tonight, with the Aston Villa man again faultless in an England shirt.

While he wasn’t particularly troubled by a toothless Irish attack, he was composed in possession and vocal in barking out orders to his teammates.

The injury to Joe Gomez means Mings may well be given even more minutes in an England shirt going forward.

And the way things are going for him both on and off the pitch it would be no surprise to see Mings become a first-choice pick in the centre of defence by the time the Euros roll around next summer.

Whisper it quietly… but Calvert-Lewin is looking more and more similar to Harry Kane every day.

The Everton forward was a constant handful again tonight, and when Bukayo Saka was brought down in the box he made it very clear to everybody that he would be the man to take the spot-kick.

Even his technique for the penalty resembled Kane, with a little stutter before he thumped it into the top corner to make it 3-0.

It’s easy to remember Kane was a late bloomer, and only really hit his clinical best following loan spells in the lower levels – similar to Calvert-Lewin.

With Calvert-Lewin now 23 and in the form of his life, could he follow in the Tottenham man’s footsteps?

Jude Bellingham became the third-youngest man ever to play for England when he came off the bench with 20 minutes to go.

At just 17 years and 137 days old, it is fair to say the Dortmund star has a pretty exciting career ahead of him, and he certainly didn’t seem overawed by the occasion tonight.

Bellingham slotted into midfield and looked confident with the ball at his feet, and couldn’t have asked for a more comfortable debut.

It would be fascinating to see Southgate give him some more minutes against Belgium or Iceland, but even if he doesn’t this was surely just the first of many, many caps for Bellingham.