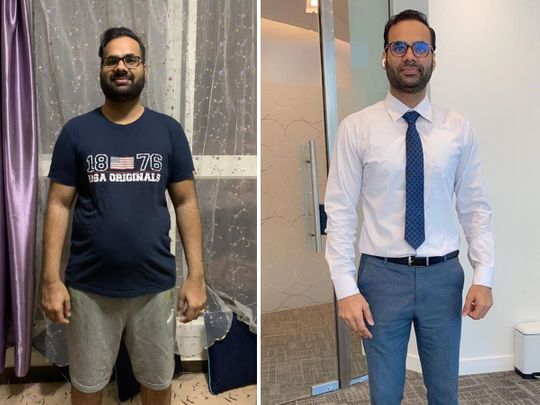 Dubai: Meet Baljeet Singh, an insurance consultant working in Dubai. Today Singh 33, weighs 68kg which at this height of 5 feet 10 inches gives him a BMI of 18. He has a fat concentration in his body that has plunged from 37 per cent to 11 per cent.

Singh, from Ludhiana in India’s northern state of Punjab, said he was able to lose his weight with sheer willpower, a simple nutrition plan and workout programme that he devised for himself. But the key is to remain balanced.

The weight loss journey began in November 2019. He told Gulf News, “When I came to the UAE in 2015 at the age of 27, my weight stood at 85kg. I was overweight but still, it did not trigger any alarm bells.”

However, when Singh and his wife moved from Dubai to Sharjah for some time, their commute time went up since both worked in Dubai. “I was spending at least four hours on the road, had no time for any health-related activities and when I reached home in the night, it was only to have dinner and go to bed. The stress was not helping at all, plus I was having a lot of junk food on the go,” recounted Singh.

Soon, his old respiratory allergies came back. “I had some allergies earlier and when I was experiencing trouble breathing, one of the doctors prescribed the asthma pump. I went in for a second opinion and was told I needed to cut back on unhealthy eating, had to work out and reduce weight. By then my weight stood at 97kg, an all-time high. “

So, the Singhs took some immediate and drastic steps. To begin with, they moved back to Dubai and cut out the travel time and stress. Singh was also inspired by his wife, Meenakshi, who has been fitness conscious. He did a thorough research on nutrition and work outs that would give him best results.

Singh said: “I went on a Keto diet for the first 45 days with more fat and a small amount of protein. I cut out all carbohydrates, complete sugar, replaced it with stevia, although a vegetarian by choice, included eggs and chicken in my meals and within four weeks lost 9kg, which was a great kick-start to my metabolism,” said Singh.

Singh said, “My new diet was not balanced and one must not continue such diets for long. So I did not start working out immediately.”

After the first four weeks, Singh introduced simple exercises including burpees, lunges and squats – 10 repetitions of three sets each. “I also began consuming four litres of water and a strict routine of seven hours of sleep. I would go to bed by 9pm and arise at dawn at 4am.”

Tailoring food for a calorie deficit coupled with regular workouts did the trick, he said.

Singh’s resolve and discipline helped him knock off more weight progressively. During the lockdown, with less commute time, Singh was able to focus on his health plan better. Describing his one-year routine, Singh said: “I involved no physical trainer or nutritionist. I had done all the research myself, made my notes and did my own cooking and figured out that I required a diet of 2,000 calories in a day. I would arise at 4am, get into the kitchen and cook my special meal. Everything was measured and I was careful with the micro and macro nutrients I needed for intake. I have worked out a diet of 1,500 calories and that means a deficit of 500 calories. Initially on keto, I would bake my own keto bread of almond flour, desiccated coconut and egg and sauté vegetables. After this I would drive to my gym from 6-7.30am, after which I drove to work.”

Within six months, Singh’s weight stood at 67kg. “After I achieved this amazing BMI of 18 and had worked on cutting out my fat percentage in the body, I am on a maintenance diet now. I have reverted to being a vegetarian and my food now includes low carbohydrate foods such as a tofu, cheese, a variety of vegetables, pulses and lentils,” said Singh, who is feeling extremely light and energetic and has no health complaints.

His message to others looking to achieve weight loss goals: “It is important to take charge of your health sooner than later. Eating healthy and being physically active is a lifestyle choice that you must adopt if you have to lose weight. There is no shortcut. Be focused, draw up a detailed plan, understand your body well and launch a determined and disciplined campaign. Success is a certainty.”

Obesity is a chronic disease

At a time when obesity has been recognised as condition that can lower immunity and make individuals more prone to catching infections such as COVID-19, the World Obesity Foundation (WOF) has released a report specifically for the Gulf and Lebanon region.

29.9 per cent of adult population in UAE is obese

The UAE has been grappling with the issue of adult and childhood obesity and has introduced several health and nutrition reforms to raise awareness. The current 30×30 Dubai Fitness challenge bears testimony to the government’s will to involve every resident in the fitness movement and work towards reduction of obesity levels.

According to another survey result conducted on the UAE population from 2007 to 20 which was published this year, about 29.9 per cent of the adult population in the UAE is obese as compared to 21. 5 per cent in 2017. With the rising trends on obesity it was important for the World Obesity Federation to prepare w new report.

Dealing with obesity the holistic way

The new WOF report is based on a virtual discussion that was held with top obesity specialists in the region. It stresses that the starting point to the delivery of comprehensive, multidisciplinary obesity care is the recognition of obesity as a chronic, progressive and relapsing disease by all stakeholders. The report recommends going beyond the accepted trend of defining obesity with measuring the Body Mass Index and actually tackling it with the use of the “Edmonton Staged Approach”. This approach encompasses other well-being criteria, including mental health and also identifies strategies that should be delivered through primary, secondary and tertiary levels of patient care.

Dr Sara Suliman co-author of the WOF report and a UAE-based consultant endocrinologist and diabetologist, explained, “Standardising care for patients with obesity will help in recognition of obesity as a disease and will provide a framework for appropriate management of obesity to try and prevent as well as manage long-term complications.”

She added that the WOF would be holding an obesity conference in the UAE from November 26-28 to highlight the theme of “Obesity across the lifespan” to raise awareness of the risks of obesity as early as in pregnancy, early childhood and then later in life. 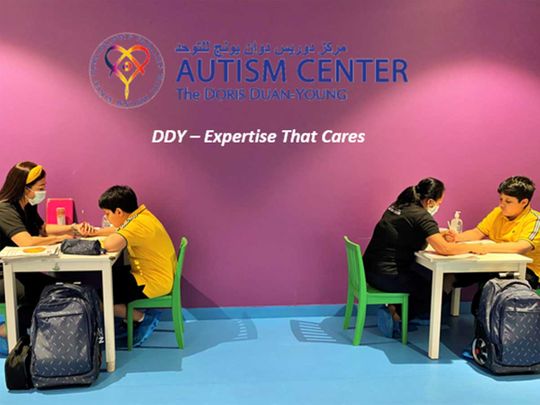 Is your child ready to get back to school?