By Sam Joseph Semon For Dailymail.com

A Pennsylvania house that Los Angeles Lakers legend Kobe Bryant grew up in was sold on Friday, with one of the hoops that the athlete would practice on still attached to the home.

According to a report published Tuesday by TMZ Sports, the 5-bedroom, 3 1/2-bathroom house was occupied by the Bryant family during Kobe’s adolescence.

A place for legends: Kobe Bryant’s childhood home was sold for $810K ten months after the athlete passed away

The selling number may be symbolic, as it reflects the 81-point game that Bryant played against the Toronto Raptors in 2006, which was the second-highest scoring point total game in NBA history behind Wilt Chamberlain’s 100-point game in 1962.

The listing was represented by David Whyer and TJ Sokso of Compass.

While living in the house, the basketball player led the Lower Merion High School basketball team to a 1996 championship.

During his junior year of high school, Bryant averaged 31.1 points a game and was named the Pennsylvania Player of the Year. 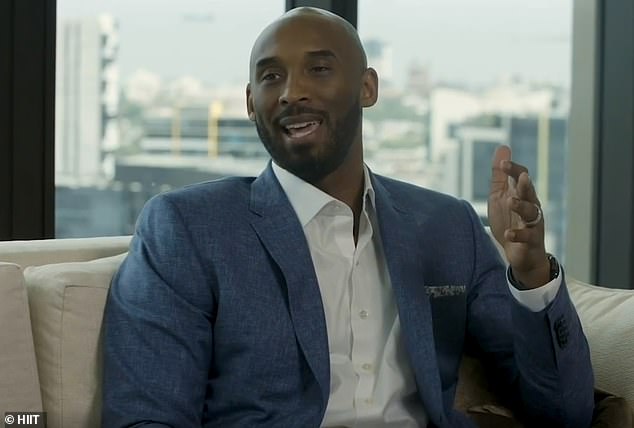 The Black Mamba himself: Bryant is seen in an interview from March 2019 Hoop dreams: The home still featured a basketball hoop that Bryant would practice on in his youth

The athlete earned the 1995 Senior MVP award at the Adidas ABCD camp, where he played alongside future Laker teammate Lamar Odom.

He received numerous accolades for his time at Lower Merion, including the Gatorade Men’s National Basketball Player of the Year and the Naismith High School Player of the year, and was named a McDonald’s All-American. Making it big: The athlete lived at this house during his time at Lower Merion High School Bryant was selected by the Charlotte Hornets directly out of high school in the 1996 NBA Draft and quickly made a name for himself as a promising rookie.

The Black Mamba ended his professional career with five championships, 18 All-Star selections, and the MVP award for the NBA’s 2007-2008 season, among other accolades.

The Dear Basketball writer was killed in a helicopter crash in late January along with his 13-year-old daughter, Gianna. Showing its roots: An image for the listing included multiple articles of basketball memorabilia Keeping it close: Bryant posed with his family as his jerseys were retired at the Staples Center in 2017 7 Of The Biggest Celebrity Feuds Of 2020: Taylor Swift Vs. Kim Kardashian & More