A Virginia police chief has been forced to defend shaking hands with an armed Boogaloo Bois member during a protest over gun laws outside the officer’s station.

Chief Steve Drew also handed Mike Dunn some chocolate milk, in a gift swap between the two men, and offered him access to a PA system to make speeches.

Footage from the October 15 protest shows as the two men greet each other outside Newport News police headquarters. Drew hands Dunn the chocolate milk; Dunn returns the favor with a bottle of Mountain Dew.

Dunn, who is connected to the far-right wing extremist Boogaloo movement, told the crowd the drink had been Drew’s ‘way of apologizing without coming out and apologizing’ after the protester had been arrested the week before.

But Drew told The Daily Press it had been a ‘de-escalation’ technique to ensure the event passed without trouble.

He added: ‘I think the citizens should be proud of the department for the way that things were handled. To me, any protest, demonstration or rally that ends peacefully, I think that’s the tone we should set.

‘I was teasing Mr. Dunn about chocolate milk and he was teasing me a little bit. I think that’s just a gesture that we’re willing to work and talk.’

Chief of Police Steve Drew shares a drink with Boogaloo Boi and organizer of the rally Mike Dunn at Newport News, VA on Thursday October 15 Black Lives Matter protester Aubrey ‘JaPharii’ Jones Jr. said: ‘In my four years of activism, I have never had a police chief offer me a f*****g PA system to come tell them what I am and ain’t gonna do. It just hasn’t happened.’

Drew said the idea that some have connected his treatment of Dunn to the fact he is white ‘bothers him’.

He said: ‘We don’t close our doors to anybody. This department serves the city of Newport News. It doesn’t matter to me your age, your zip code, your race or where you live.’ Dunn is arrested by a Newport News police officer in Huntington Park on October 8. Dunn was open carrying a pistol at the park which violated Newport News city ordinance of carrying pistols on city owned property 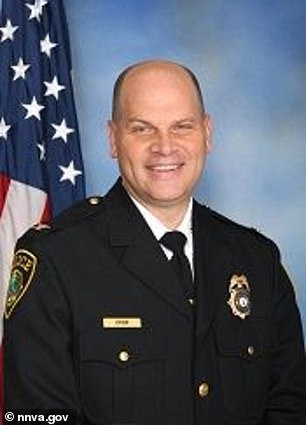 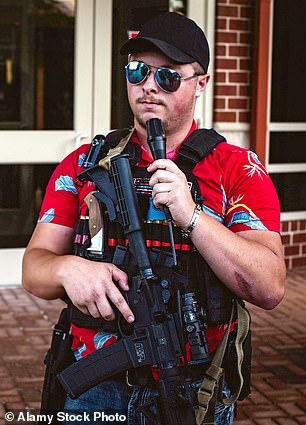 Footage from the October 15 protest shows as the two men greet each other outside Newport News police headquarters. Drew hands Dunn the chocolate milk; Dunn returns the favor with a bottle of Mountain Dew. Dunn, who is connected to the far-right wing extremist Boogaloo movement, told the crowd the drink had been Drew’s ‘way of apologizing without coming out and apologizing’ after the protester had been arrested the week before

WHAT IS THE BOOGALOO MOVEMENT?

The heavily armed participants linked to the group say they’re preparing for a second Civil War.

It got its name from the panned 1984 movie ‘Breakin´ 2: Electric Boogaloo’ and uses the title as a code word for a second Civil War.

Other derivations of ‘boogaloo’ are ‘big igloo’ or ‘big luau.’

Followers are easy to spot with their trademark Hawaiian shirts and high-powered rifles and tactical gear.

The movement is made up of pro-gun and anti-government groups.

Participants mostly organize on Facebook but have attended recent events like the COVID-19 lockdown protests and demonstrations of George Floyd’s death.

Facebook earlier this month moved to limit the movement´s exposure on its platform by no longer recommending user groups associated with the term ‘boogaloo’ to members of similar associations.

A group of around 20 protesters, many associated with the Boogaloo movement, had gathered over an order banning the open carry of firearms at city buildings, facilities and parks.

Footage shows as Drew tells Dunn: ‘Know this, I support your right to free speech.’ The two ‘cheers’ their bottles.

The Boogaloo movement is a loosely organized far-right wing extremist group known for their anti-government, anti-police and pro-gun beliefs.

During his speech, using the police supplied PA system, Dunn said: ‘We’re here standing together openly and blatantly defying an unconstitutional city ordinance, and we will keep doing that.’

Drew told The Daily Press the group had not broken any laws as they were outside the police station.

‘We’ll treat you with the utmost respect and just ask the same.’

Self-described ‘boogaloo bois’ have joined protests against coronavirus lockdowns and racial injustice, carrying rifles and wearing tactical gear over Hawaiian shirts. The shirts refer to ‘big luau,’ a riff on the term ‘boogaloo,’ which comes from the title of a 1984 sequel to a breakdancing movie.

Federal authorities have linked the movement to domestic terrorism attacks and plots, including the slaying of a federal security officer and a sheriff´s deputy in California. An Air Force sergeant was arrested for the killing.

Duncan Socrates Lemp, 21, was shot and killed by a police officer during a pre-dawn raid on his family’s Maryland home.

There were no arrests or reports of violence at the October 15 protest. Protest organizer Mike Dunn and a protester with a gun raised in the air pose for photos during an open carry protest on July 4 in Richmond, Virginia. People attended an event in Virginia tagged Stand with Virginia, Support the 2nd amendment 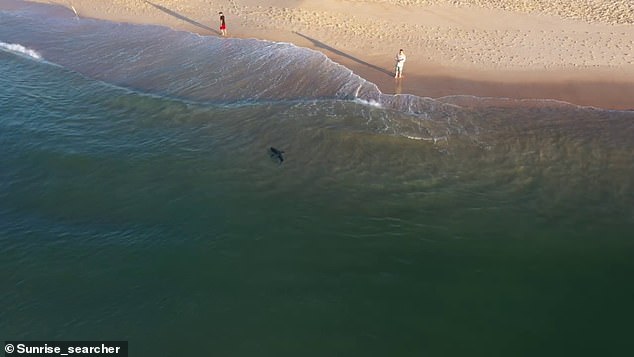 Telenovelas 2021: All the series that Telemundo and Univision premiere in the new year | The State