By Ariel Zilber For Dailymail.com and Associated Press

A helicopter delivering a donated human heart to a hospital in East Los Angeles crashed on the roof on Friday, and a doctor dropped the organ when it was rescued from the wreckage before it was eventually transplanted successfully.

Luckily the three people aboard the helicopter escaped without serious injuries, despite the terrifying rooftop crash.

Dramatic amateur video shows the private eight-seat helicopter ambulance spinning out of control moments before the pilot was set to land it onto the roof of Keck Hospital in Boyle Heights just at 3:15pm on Friday.

As the AgustaWestland AW109 medical helicopter descended toward the helipad, it suddenly started spinning and veered toward the edge of the roof before landing on its side.

Hospital officials said nobody inside or around the facility was injured. Passersby outside went running after debris fell from the chopper, according to KTLA-TV.

Dramatic amateur video shows the private eight-seat helicopter ambulance spinning out of control moments before the pilot was set to land it onto the roof of Keck Hospital in Boyle Heights just after 3:15pm on Friday

The aircraft landed on its side. Luckily, none of the three people on board were injured seriously

The Los Angeles Fire Department rescue services used the ‘jaws of life’ to retrieve the organ, which was inside the aircraft

The rescue services then gave the organ to a medical worker, who tripped and fell, dropping the heart. Luckily, the organ wasn’t damaged

Video shows rescue workers working quickly to save the organ, which was stranded inside the helicopter. They used the ‘jaws of life,’ the nickname given to hydraulic rescue tools, to cut through the metal and retrieve the heart.

They managed to hand the organ to a medical worker, who promptly turned around and rushed inside the hospital.

But the medical worker then tripped over helicopter debris, dropping the heart. Luckily, no damage was done to the organ.

The hospital later said the heart was being transplanted.

Doctors inside the hospital said they felt a ‘light, brief jolt’ when the chopper crashed on the roof.

And luckily, the building does not seem to be at risk.

‘The aircraft is stable on its side, on the helipad,’ LAFD said shortly after the crash.

‘There does not appear to be a significant fuel leak.’

The pilot was hospitalized with minor injuries. He is seen above being wheeled out on a gurney

An AgustaWestland AW109 medical helicopter flying from San Diego is seen above getting ready to land onto the roof of Keck Hospital in East Los Angeles on Friday afternoon. The helicopter is carrying a donated human heart that is to be transplanted

News reports showed the helicopter on its side on the rooftop pad, with its rotor blades gone.

‘The donated organ that was being transported was safely retrieved by LAFD firefighters and handed over to USC-County Hospital staff,’ the Fire Department tweeted. 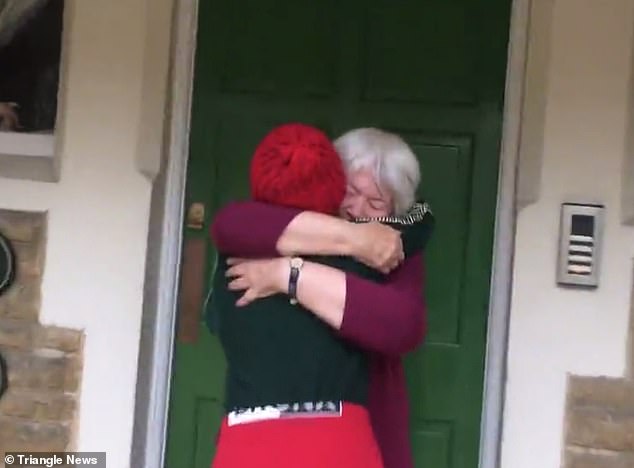