Ishaan Khatter is grateful for all the good reviews he has got for his performance in Mira Nair’s A Suitable Boy. He is also aware that the show’s reception has not been as overwhelmingly positive. However, he maintains a healthy attitude about it and wants to learn to adjust to the ‘ups and downs’.

Speaking to Hindustan Times, Ishaan said he cannot hold it against the audience if they did not like his show. “First of all, one must always feel grateful to have been appreciated and encouraged. It’s not like I am going to hold it against anybody to have an opinion against the show. Just like I would not hold it against anyone for possibly not liking maybe my work in something. You learn from it and you move on. I think people have been largely polarised about the show. A lot of people also liked it and others didn’t think much of the show. I have been quite grateful and humbled really that it has been quite unanimous about my performance and it just reinforces my feelings about my work and I feel more encouraged and charged to put myself into my next instalments of work,” he said.

Ishaan played Maan in the BBC series–the son of a politician, who develops an attraction to the courtesan Saeeda Bai (played by Tabu). He says there are many things that can work for or against a show. “I mean that’s how it is. Sometimes things click with the audience and sometimes things don’t. There are variables. Sometimes the way a film comes out, it is not given that kind of presentation and it doesn’t reach as many people. There will be ups and downs and one has to learn to adjust to them, understand them and keep growing, despite all of that because one is in it for a longer journey of growth. I am only grateful and happy that people have liked my work in it. There have also been a lot of people who have enjoyed the show so I would like to look at the brighter side. Art is subjective, it’s fine,” he said.

“But I am elated that my work is liked. This is the first time I did something on an international platform, something that was produced by the BBC. It is for the first time that I did a long format cinema or series. It had definitely been a learning experience and a step forward. To work with the people that I got to work with was an experience I will cherish, including Tabu, Mira Nair, all the actors, the technicians. So I only have good things to take back from it,” he added.

Ishaan’s last film release was Khaali Peeli with Ananya Panday. The film released in a pay-per-view format in October and has now arrived on Zee5. It is Ishaan’s third film after Dhadak and Beyond The Clouds and his first, typical Bollywood entertainer with a dash of romance, a heavy dose of acting and a sprinkling of humours. However, Ishaan said that being part of a ‘masala film’ was not on his priority list. “I did not set it up on a priority. It wasn’t like it was a calculated decision. It definitely excited me as it was a space I had not explored before. It just so happened that a right film came along that excited me. It got my juices flowing and I felt like it would be a nice to do a role like this,” he said.

Also read | Priyanka Chopra reveals 2 most uncomfortable outfits she’s ever worn: ‘The tape came off, I was holding up dress with namaste pose’

Khaali Peeli features Ishaan as a street smart taxi driver who runs into his childhood sweetheart (played by Ananya) in a really peculiar situation. Ananya plays a young woman being forced to marry a slimy businessman who had set his eyes on her when she was no older than 10. The film, though an out-and-out filmy actioner, also touches upon child grooming and trafficking, which carry a big potential to get mishandled in less sensitive hands. However, Ishaan had full trust in his director, Maqbool Khan.

“The first time that I was made to hear the script, he (Maqbool) was very clear from the very beginning that it is an entertaining film and he doesn’t want to examine or delve into this topic too deeply. He doesn’t want to change the tone of the film. But at the same time it was important that he handled it sensitively and he also gives it that importance. He wanted to have the right balance. Maqbool Bhai is someone who has lived in Bombay for 19-20 years, done a lot of work in television, so he understands Bombay and that underbelly of the city. So he was able to portray it in a manner that was fitting for a commercial Hindi film and also in a way that feels real. We always knew he was going to do it justice because he understands it.” 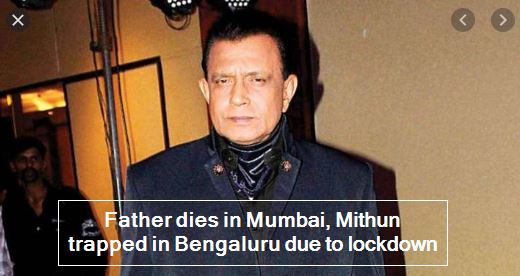 Father dies in Mumbai, Mithun trapped in Bengaluru due to lockdown