Furious independent traders have called for a clampdown on major chains like Ryman and The Range for selling ‘non-essential’ items during lockdown while smaller firms have closed.

Thousands of retailers were forced to shut alongside pubs and restaurants on Thursday when England was plunged into a four-week lockdown in a bid to stop the spread of coronavirus.

However, some High Street stores appear to have escaped the swingeing restrictions and have found reasons to declare themselves essential in order to follow the new Government guidelines.

Ryman stationers and Carpetright are among the retailers who have continued trading this week despite selling a substantial amount of ‘non-essential’ goods.

Elsewhere, The Range has remained open selling a variety of Christmas items.

Thousands of independent retailers have now urged the Government to take a stricter approach to major chains which have remained open despite the four weeks of restrictions.

Furious independent traders have called for a clampdown on major chains like Ryman and The Range for selling ‘non-essential’ items during lockdown while smaller firms have closed. Pictured: A shopper outside Costco in Watford today 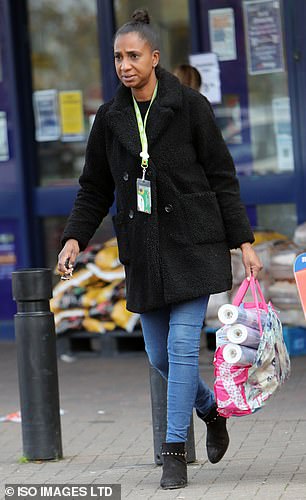 Pictured: Shoppers carry toys and wrapping paper as they leave The Range in Watford today Pictured: Shoppers wear face masks and visors as they push loaded trolleys out of Costco

Andrew Goodacre, the chief executive of trade association Bira, told the Guardian the retailers he represents believe it is an ‘injustice’ that some homewares and non-food stores are still open while they have closed.

‘The Government need to make it very clear to these large companies that they cannot open or can only sell what they deem essential, not a whole range of Christmas trees and lights,’ he said.

‘Independent non-essential retailers have accepted the ruling but what they can’t accept is that it doesn’t apply to competitors like homeware stores that might sell a bit of hardware and food.

‘It seems completely unfair that those retailers can bend the rules at this important trading time.’

Any retailer selling ‘non-essential’ goods was told to close for a month on Thursday as England’s winter lockdown came into force.

This means shops selling clothes, homewares, furniture, electronics and other ‘non-essential’ goods should shut, alongside vehicle showrooms, tailors and tobacco and vape stores. 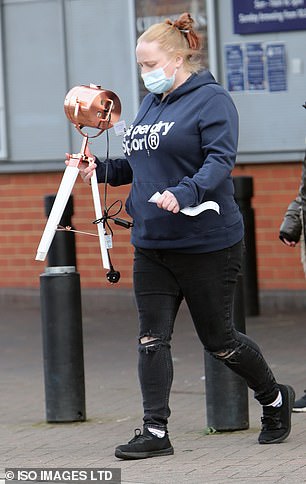 Frantic shoppers were today seen loading their trolleys with Christmas wreaths, light-up festive decorations and rugs as they left The Range in Watford Pictured: Shoppers leave The Range in Watford with a trolley loaded with Christmas decorations

Guidelines published on Friday confirmed that supermarkets or other ‘mixed’ retailers would not have to block off aisles where they were selling products considered ‘non-essential’.

Those selling these ‘non-essential’ goods in separate areas were, however, told to close them to customers until December 2.

Despite this guidance, The Range has continued to allow customers to shop in upper floors stocked with Christmas decorations and other ‘non-essential’ goods, according to The Guardian. Guidelines published on Friday confirmed that supermarkets or other ‘mixed’ retailers would not have to block off aisles where they were selling products considered ‘non-essential’. Pictured: A shopper leaves Costco An insider at a large retailer which competes with The Range described the situation as ‘the wild west,’ adding: ‘The legislation was rushed and now government has lost control, with some retailers taking liberties in a very unfair playing field.’

The Range, which has 184 stores across Britain, said it remained open because it stocked ‘thousands of essential everyday products’ in a notice on its website.

The retailer added: ‘As a value retailer, we understand that a lot of our customers rely on us to provide essential items like groceries, pet care products, non-prescription medicines, toiletries and cleaning items, at the low prices that they need right now.’ The Range, which has 184 stores across Britain, said it remained open because it stocked ‘thousands of essential everyday products’ in a notice on its website Carpetright added it had decided to remain open after ‘reviewing the regulations’ issued by the Government. Pictured: The Range in Watford today

Its website reads: ‘Ryman provides essential services such as DHL, Post Offices and Western Union money transfers and our stores will remain open for business as usual during November.’

Carpetright added it had decided to remain open after ‘reviewing the regulations’ issued by the Government.

A statement said: ‘We are experiencing a high volume of enquiries from customers, trade partners and companies as to whether they will be able to complete their essential projects for their home or business.’

Elsewhere, Poundland told MailOnline: ‘We’re open across the country but this is no different to the previous lockdown.

‘That’s because well over 70 per cent of what we sell is food and essentials, but just as importantly, we’re a lifesaver for those who normally walk to the shops, live week-to-week and cannot always afford to bulk-buy in supermarkets. Pictured: Shoppers carry a rug and a can of paint out of The Range in Watford today A number of shops are also open for click and collect customers, such as Pandora, Next, the Non Stop Party store in Kensington, west London and GAME. Pictured: Costco

‘Not only that, we’re on the very high streets that need the most help.

‘It goes without saying our stores will be as rigorous as ever about safety and hygiene so customers can shop safely.’

Robert Dyas and Wilko stores are among those which have not been forced to shut under the current lockdown restrictions.

Laundrettes and dry cleaners are also classed as an essential service and are allowed to continue serving customers – as they were during the first lockdown.

Furthermore, health shops are classed as essential under new guidelines.

Holland and Barrett stores have stayed open and customers are welcome to come in and browse the shelves for healthy food, vitamins and supplements.

The alternative health chain has over 750 UK stores and counts as an essential retailer because its products cater for people with special dietary needs.

The chain also remained open during the first lockdown as they are considered a food retailer.

James Timpson, the Chief Executive of the Timpson Group, confirmed on social media that his stores would remain open during the second lockdown.

The Timpson chain are cobblers that also provide dry cleaning, phone repairs, key cutting and locksmith services in some of their stores.

Mr Timpson said: ‘In England virtually all our shops will be stay open in this lockdown as we offer essential services, but sales will be lower I suspect by some margin.’

A number of shops are also open for click and collect customers, such as Pandora, Next, the Non Stop Party store in Kensington, west London and GAME – which will offer a collection service on November 10 and 19 to coincide with new console launches. 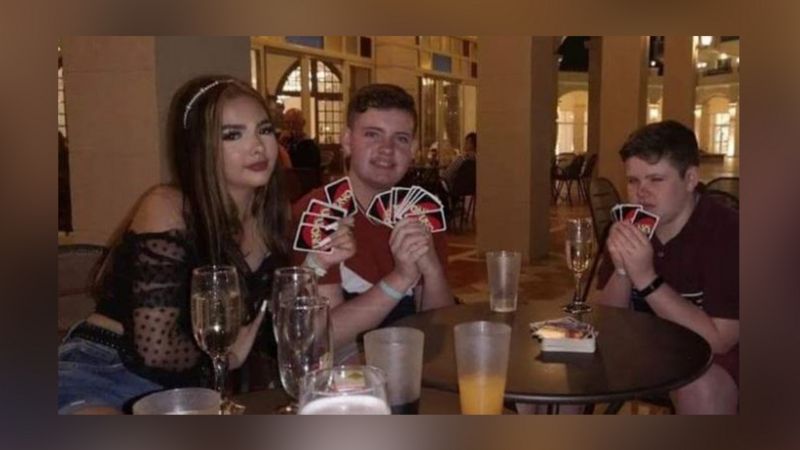