Mourning the sad demise of Faraaz Khan, 46, who breathed his last on Wednesday, his friend Rishina Kandhari says that the late actor and musician will be remembered for his wisdom, wit and craft. Khan was undergoing treatment for neurological disorder and was admitted a Bengaluru hospital.

“I got introduced to him through my husband (Vishal Kandhari, businessman)… they were closest of friends, like a family. He’d often come to our house and I even went to his Bangalore home two years back. In fact, we had plans of catching up this year, but then this pandemic happened. I’ll miss our insightful conversations and music sessions,” she tells us.

Bidding a final goodbye to Khan, Kandhari had posted a picture with him on social media, and wrote, “RIP my friend… U’ve left us all Un-comfortably numb… (sic)”

Read: Faraaz Khan dies of brain infection at 50, Pooja Bhatt says ‘void he has left behind will be impossible to fill’

Talking to us, she further recalls, “Faraaz was my first teacher, who felt I have a flair for music and a good voice. He taught me how to play the guitar, and would often sing for us. He was a gifted musician. He’d write, compose and sing. I used to call him Guru Devo.”

“We’d often talk over long calls. He enjoyed conversations. But last March he texted us, ‘No energy to talk yet on the phone my dear. We’ll have to text only for now.’ It got us worried while he only said he was unwell. I spoke to aunty (Khan’s mother) and she told me about his health conditions,” recounts Kandhari.

Khandhari’s family also extended support but she doesn’t want to talk about it. “We really have nice people in the industry. Nikhil Dwivedi contributed, and said Salman wants to help, so if I can share the contact of Faraaz’s family. I wish all these love and support saved Faraaz, wish I could talk to him one last time,” says the actor, further revealing that Khan was contemplating to come back to Mumbai.

“He was extremely talented and well-informed. He’d talk about his films, tell us stories about his father (late actor Yusuf Khan). I’ll always remember his advice to me, ‘Rishina never give any suggestion until and unless you’re asked for it’,” she ends. 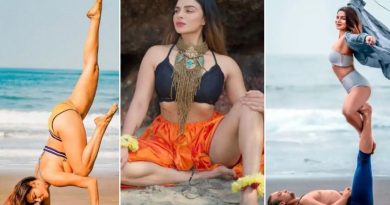 Aashka Goradia did nude yoga, showed her perfect figure in the sea…

Coming to stardom: Child wonders on screen in 2020