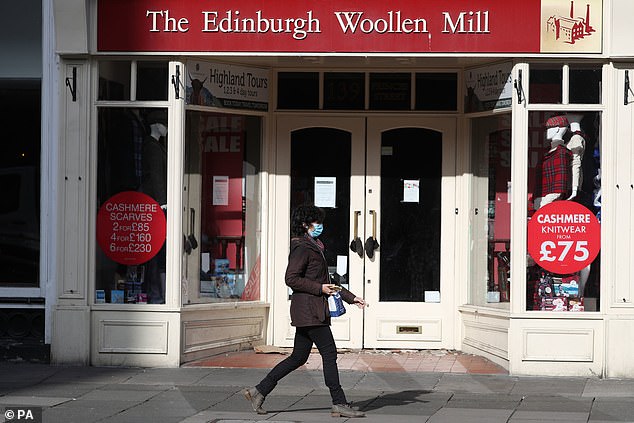 The remaining 328 EWM and 65 Ponden Home stores will continue to trade, Covid-19 restrictions permitting, whilst a buyer is sought.

However, sources close to the process say they believe a buyer is unlikely to be found and a total of 2,571 staff face losing their jobs.

Tony Wright, joint administrator and partner at FRP, said: ‘Recent months have proven extremely challenging for many retailers, even those that were trading well before the pandemic, including the teams at Edinburgh Woollen Mill and Ponden Home.

‘The administrations will provide some further protection while we continue our search for buyers to secure the long-term futures for both businesses.

‘Regrettably, the impact of Covid-19 on the brands’ core customer base and tighter restrictions on trading mean that the current structure of the businesses is unsustainable and has resulted in redundancies.’

Separately, EWM Group – owned by businessman Philip Day – has been granted a further two-week extension by the High Court to continue discussions with potential suitors for its other brands Peacocks and Jaeger.

The retailer said last month that it would go bust without filing for an intention to appoint administrators with the High Court, with 24,000 jobs in the balance.

It is understood there is interest in parts of the business but a further 100 to 150 stores across the group are being earmarked for closure while talks continue with landlords on reducing rents.

Discussions on the sale of the Peacocks brand were also hit by lockdown restrictions in Wales, with the company’s headquarters and distribution centre based in Cardiff.

A spokesman for EWM Group said: ‘Over the past month we explored all possible options to save Edinburgh Woollen Mill and Ponden Home from going into administration, but unfortunately the ongoing trading conditions caused by the pandemic and lockdowns proved too much. Edinburgh Woollen Mill is owned by businessman Philip Day, who has a fortune of £1.05billion ‘In the case of Peacocks and Jaeger we are speaking to a number of parties who are interested in either buying parts of the business or offering investment, and those conversations are ongoing.’

The company is reportedly in talks with the owner of shirt-maker TM Lewin – Torque Brands – to buy Jaeger and other parties are said to be interested.

It is also reported to be trying to save Peacocks, with a capital injection from US hedge fund Davidson Kempner.

Last month the company lodged a notice of intention to appoint administrators to look for potential buyers to shore up the struggling business.

Bosses wrote to staff on October 9, warning them the national and local lockdowns had hit sales very heavily.

If the company goes under and all jobs are lost it will be Britain’s largest business casualty so far.

From dyeing yarn to fashion: The EWM story

Edinburgh Woollen Mill was first founded in 1946 by Drew Stevenson as the Langholm Dyeing and Finishing Company and chiefly dyed yarn.

By 1970, when it opened its first shop Edinburgh, then two years later opened another across the border in Carlisle.

It was taken over by a management buy-in led by Philip Day and is now an independent privately-owned business 100% held by his family.

It acquired the Jaeger brand in 2017 and Peacocks came earlier in 2012 when it was taken in after going into administration.

The unenviable record had previously been held by British Airways shedding 12,000 roles back in April.

EWM said it had been hit hard by allegations – which it has denied – that the retailer and several rivals failed to pay some Bangladeshi suppliers during lockdown in an attempt to cut costs for clothes they were unlikely to sell.

The move for the firm, owned by businessman Philip Day, saw insolvency specialists at FRP spend 10 days carrying out an urgent review.

EWM chief executive Steve Simpson previously said: ‘Like every retailer, we have found the past seven months extremely difficult.

‘This situation has grown worse in recent weeks as we have had to deal with a series of false rumours about our payments and trading which have impacted our credit insurance.

‘Traditionally, EWM has always traded with strong cash reserves and a conservative balance sheet, but these stories, the reduction in credit insurance, against the backdrop of the lockdown and now this second wave of Covid-19, and all the local lockdowns, have made normal trading impossible.

‘As directors we have a duty to the business, our staff, our customers and our creditors to find the very best solution in this brutal environment.

‘So we have applied to court today for a short breathing space to assess our options before moving to appoint administrators. ‘Through this process I hope and believe we will be able to secure the best future for our businesses, but there will inevitably be significant cuts and closures as we work our way through this.

‘I would like to thank all our staff for their amazing efforts during this time and also our customers who have remained so loyal and committed to our brands.’

How more than 210,000 job losses have been revealed by major UK firms since lockdown began

Some 210,781 job losses have been announced by major British employers since the start of the coronavirus lockdown in March as follows:

GCSE and A-Level exam in Russian: what the pandemic is preparing for us Nightclubs throw their doors open at 3pm with half-price drinks