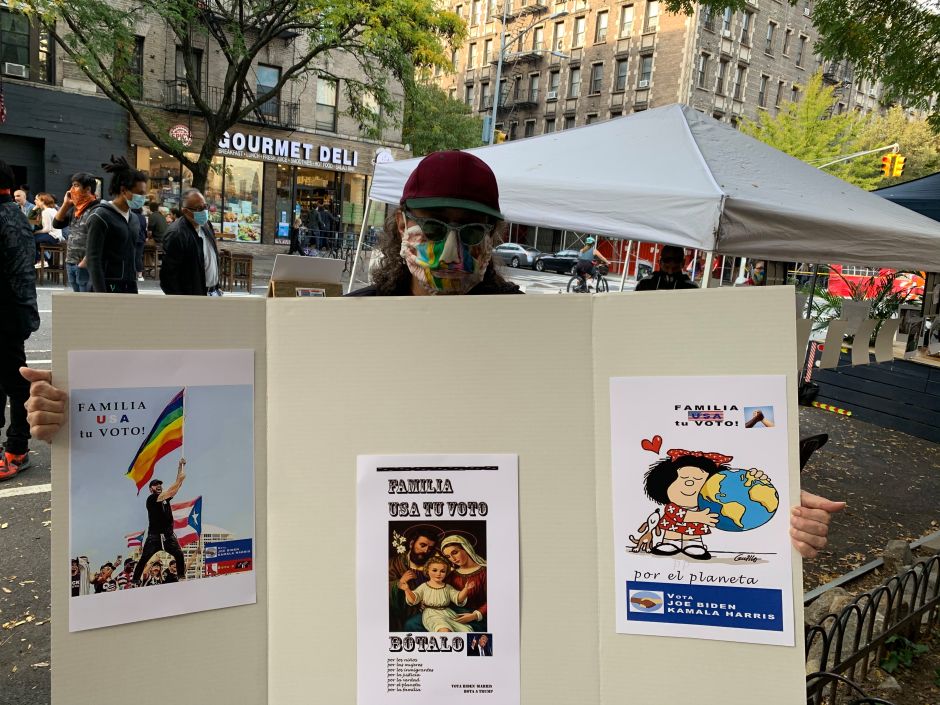 Images of the Guadalupe’s Virgin, Mafalda, José Gregorio Hernández, Pope Francis and even Ricky Martin, shine these days in some streets and restaurants of the Upper West Side, Manhattan. Full of color, and as a testimony of the Latino presence that has survived the displacement of the poorest in that part of New York, the posters “speak” in Spanish and make an urgent invitation to go out to vote this November 3. The challenge is not staying home without exercising the right to votethey say.

This is assured by neighbors, artists and community leaders in the area, who without political color, agree that due to the evident stigmatization and the attacks that the immigrant community has received like darts from Washington In the last four years, these elections are final for Hispanics to make their power felt.

“The only way to get rid of a great evil is by voting to remove a threat against humanity that at this moment is the person who is in control, and this, like the mandatory use of masks, It is not a political decision, but a human decision“, He assures Bernardo palombo, director of Latin American Workshop, (who lives on the Upper West Side) in a personal capacity.

“We have a pandemic and we have a nightmare at the same time. They are going to go together in some way, that is why it is important to vote and also understand that the new reality is not going to be put together by politicians, but rather a recreation of artists, young people, innovative minds and the communities ”, commented the Argentine, wearing a colored mask and explaining the reason for the campaign “Family USA your vote”.

The importance of voting as a family

“This pandemic has polarized everythingFor good and for bad, and as a culturally Latino community we are known for being able to put family and friends above all else, hence the importance of voting as a family, of using the vote. That goes beyond ideology, in a variety of expressions, where we show that characters like Mafalda, Pope Francis, the Orisha, the Guadalupana and Ricky Martin they are the expansion of what is called Latino and not what many Anglo people believe, that a Latino is only the one who dances ‘Despacito’ ”.

This year’s elections coincide with the program’s 10th anniversary “Good neighbours”, where despite the limitations of the COVID-19 pandemic, residents of the Upper West Side of Manhattan, in association with the organization Columbus Amsterdam BID and the artist Jennifer Pliego, have wanted to take to the streets to show that art also unites, heals and motivates political action.

“This year it is especially important for Hispanics in New York to go out and vote, and we want to make sure everyone is votingBecause many of us do not give the real importance of the vote and we think that it is something optional, that my vote does not matter much, but with these elections in particular, we cannot risk anything. We have to go out and vote, because it is a point in history, where the vote is going to matter“, He assures Michael Gonzalez, son of Mexican parents, born on the Upper West Side and project manager of the organization Columbus Amsterdam BID.

“Trump said this was his city, but this is not the city of él; This is the city of the communities, of us, of the people who make it better than it already is and we know that it will continue to be the home not only of Latinos, but of integrated communities, where we respect each other and work together ”, added the 22-year-old.

And showing an exhibition of photos of the faces of inhabitants of that part of New York, Jennifer Pliego, from the “Good Neighbors” program, wanted to set up her exterior “gallery” between 108th and 109th streets with Amsterdam Avenue, to join the your community to give relief and raise awareness.

“These faces are the people who make this a community. That is what we are. Our vision is to create a safe environment that celebrates the diversity of this place, something that is in total opposition to the Trump AdministrationBecause everything she does always shows her inability to embrace the diversity of this country, of this neighborhood, ”said the artist. “Every day it is destroying these concepts and we have to demonstrate to recover the dignity that it has wanted to take away from us and our mental health, which is the same internal health (…) I am not a politician, I am an artist, but I know that this place, these faces, these blocks, which are like a town, will continue to be maintained, because it is a moment in which we must fight together and be more connected ”.

As part of the artistic and community activities, and as the last liberation message at the time of the elections, activists say, this Sunday, they mounted a movable mural, where neighbors could demonstrate through messages. “It was a mural, not a wall”they warned.

Julio Montero, who claims to have grown up in the Upper West Side since arriving from Puerto Rico, and who claims to have hit rock bottom more than 15 years ago, added to the message of voting as a community in the elections and said that this time it is a matter of “honor”, of respect to “Most basic meaning of what it is to be human“.

“I do not believe in God, I do not believe in anything, but I believe in the strength of family and neighbors, of good people, and that it is time to remove Trump from power, as a matter of mental and emotional health for all. Voting this time is a matter of life, of respect, ”said the Puerto Rican. “I hadn’t read the message on that sign correctly, but it represents me. Let’s do it !:‘Family USA your vote … throw it away ‘… and we are going to throw it away, you’ll see ”.